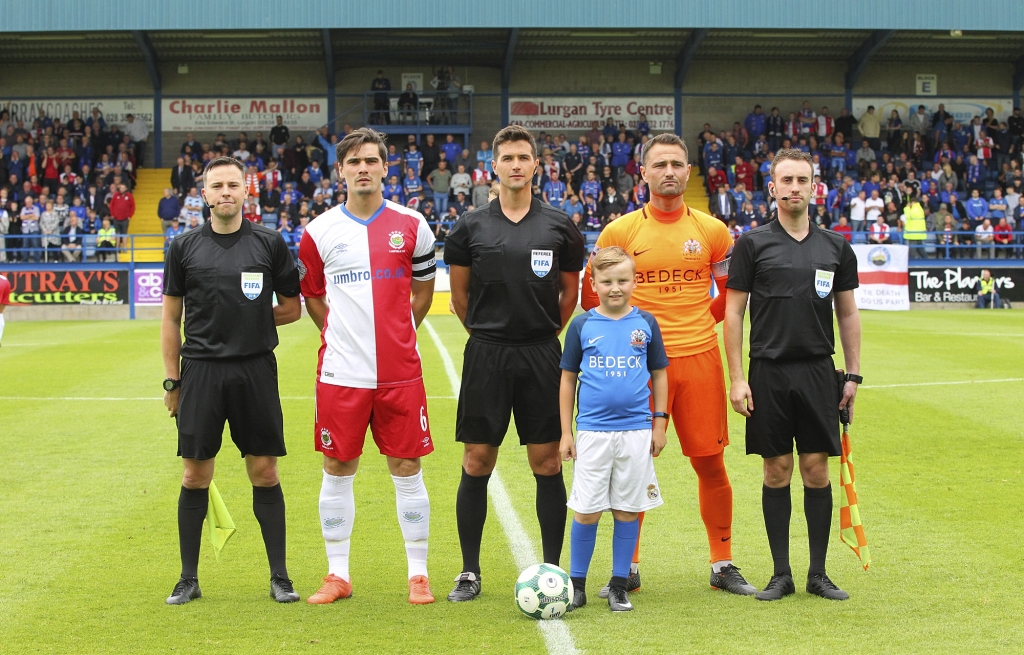 Glenavon’s 2018/19 Danske Bank Premiership campaign got underway with an undeserved 1 – 0 defeat to Linfield at Mourneview Park on Saturday afternoon.

Former Glenavon player Daniel Kearns scored what proved to be the winning goal half an hour into the game. That was after Lurgan Blues striker Andrew Mitchell had missed a gilt-edged chance in the opening minutes when he blasted a penalty over the bar following Chris Casement’s handball.

Linfield had the first opening just a minute into the match when Andrew Waterworth beat Andrew Doyle for pace, but the striker’s left-foot shot was saved comfortably by Jonathan Tuffey.

The visitors threatened again a minute later when Doyle was penalised for a foul on former Lurgan Blues winger Joel Cooper. Niall Quinn struck the free-kick, but he could only send his effort over the crossbar

After Linfield’s strong start, it was the home side that really should have gone in front on five minutes. Andrew Hall floated a free-kick into the Linfield penalty area and the ball fell for Stephen Murray when it was only half-cleared. Murray struck a shot goalwards which hit the right arm of Casement and referee Ian McNabb pointed to the spot. 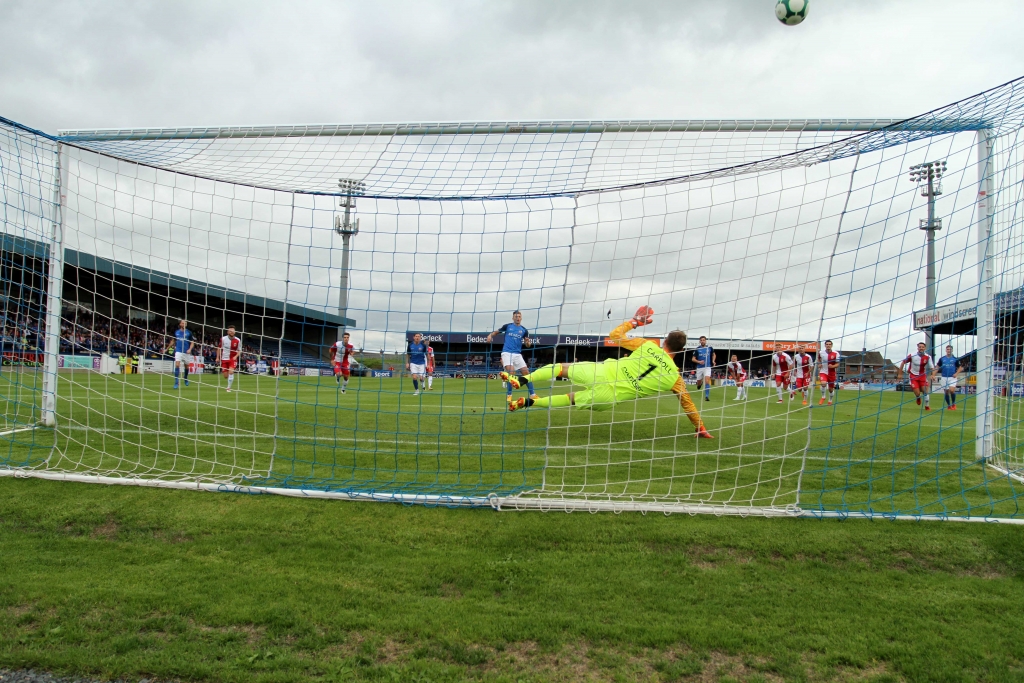 Andrew Mitchell blasts the penalty over the bar. Photo by Brian Bain

In the absence of regular penalty taker Sammy Clingan, last season’s top goalscorer Andrew Mitchell stepped up to take the kick, but the striker blazed the ball harmlessly over the bar.

On 12 minutes Linfield should have been reduced to 10 men when Casement, who had already been booked for his handball in the penalty incident, blatantly pulled Josh Daniels’s shirt, but McNabb inexplicably decided against producing a second yellow card for the full-back. 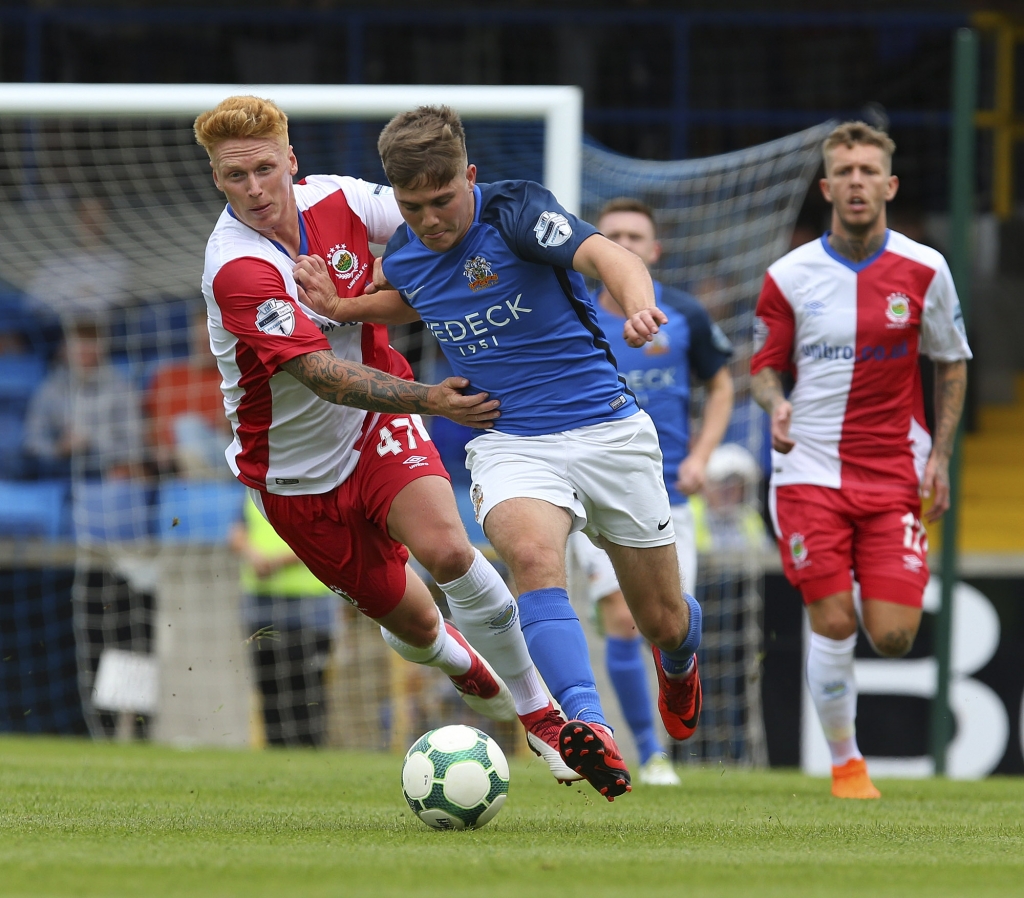 Josh Daniels is pulled back by Chris Casment. Photo by Alan Weir.

Glenavon continued to threaten, and Daniels had two opportunities in the space of 10 minutes. First he got on the end of Murray’s cross but was unable to get enough on his header to send it goalwards from a tight angle, then he was teed up by some excellent hold-up play from Mitchell, but his shot went straight at Roy Carroll.

At the other end Kearns reminded the Mourneview faithful of his undoubted ability when he cleverly dummied Doyle on the edge of the box in the 25th minute and fashioned a shooting chance for himself. However, his left-footed effort didn’t trouble Tuffey.

Linfield thought they had opened the scoring a minute later when captain Jimmy Callacher headed in Quinn’s free-kick, but the goal was ruled out for a foul.

The Blues did go ahead on the half-hour. The excellent Caolan Marron was penalised for what looked like a very soft foul on Cooper out on the left flank. Kirk Millar whipped over the free-kick and when Glenavon failed to clear it was Kearns who reacted first, nipping in front of Hall and poking the ball home at the second attempt.

It might have been honours even at half-time when Sykes had a chance following brilliant build-up play involving James Singleton, Daniels, Mitchell and Murray, but Carroll was equal to the midfielder’s shot.

Linfield almost doubled their lead in the first minute of the second half. Tuffey raced off his line and tried to clear, but the ball cannoned off Waterworth and sent the striker in on goal. His shot from close to the byline was going in, but Marron was on hand to divert the ball behind for a corner.

Just after the hour mark Hall’s clever header from a Tuffey kick put Sykes clean through on goal. His lobbed effort had Carroll beaten but fell just the wrong side of the post.

Sykes had another effort in the 70th minute, this time a shot from distance with his left foot which Carroll managed to palm away from danger.

Carroll was called upon again five minutes later when Murray’s cross from the right found substitute Jordan Jenkins. The young striker swivelled and got his shot in, but he couldn’t beat the former international goalkeeper. 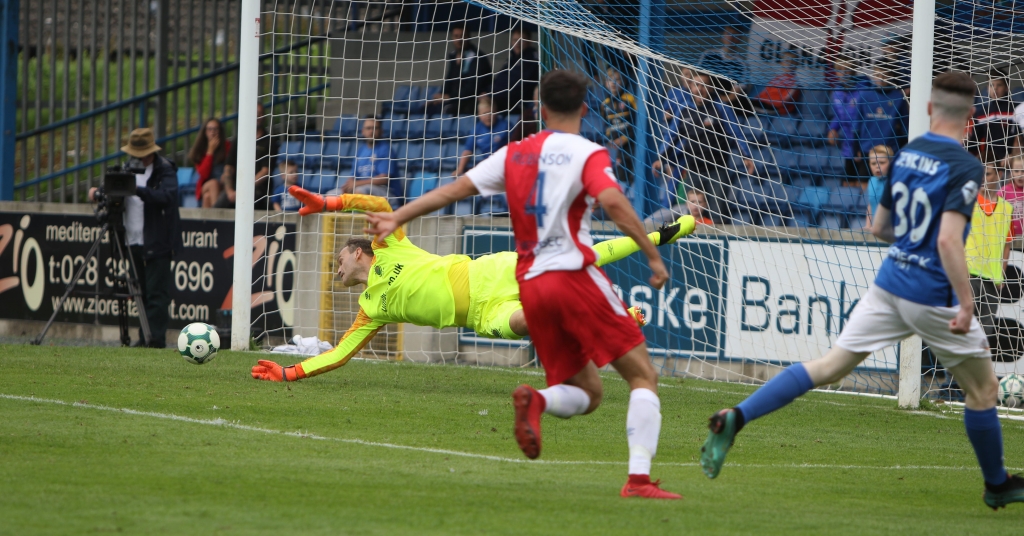 Glenavon were well on top for the vast majority of the second half and kept pushing for an equaliser deep into injury time, but they were denied by Carroll yet again in the 94th minute. Jenkins was released into the penalty area and struck a low shot with his right foot which was heading towards the far corner, but Carroll dived down to his right and got a strong hand to the ball to make one last vital save. 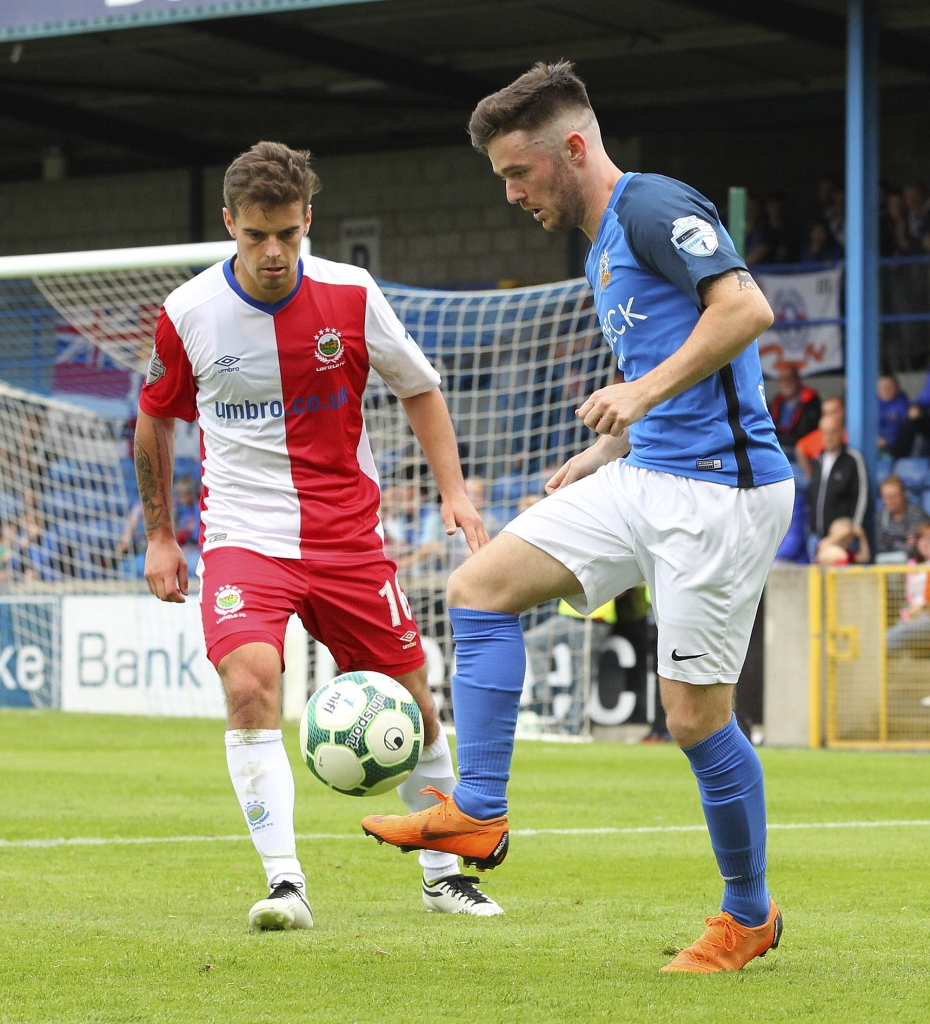 Stephen Donnelly was lively as he made his league debut from the bench. Photo by Alan Weir.

Glenavon will be bitterly disappointed not to have picked up at least one point from this opening fixture considering they were the better team for the majority of the game, and had it not been for some wasteful finishing and an inspired performance from Carroll in Linfield’s goal the Lurgan Blues could easily have claimed all three points.

Gary Hamilton’s men will be determined to get their season up and running next Saturday (August 11th) when they travel to Milltown to take on Warrenpoint Town.