Glenavon bowed out of the Europa League on a 6-3 aggregate score line after Molde overturned the Lurgan Blues’ first leg 2-1 lead with a powerful performance in the splendid surroundings of the Aker Stadium.

Two stoppage time goals for the Norwegian side rather took the gloss off what had been another superb performance by the part-timers of Glenavon. Indeed, with almost half an hour still to play after an own goal by Molde defender Vegard Forren had made the score 3-1 on the night and 4-3 on aggregate, the Glenavon players sensed a possible upset could be on the cards, knowing that another goal would have seen them through on away goals. 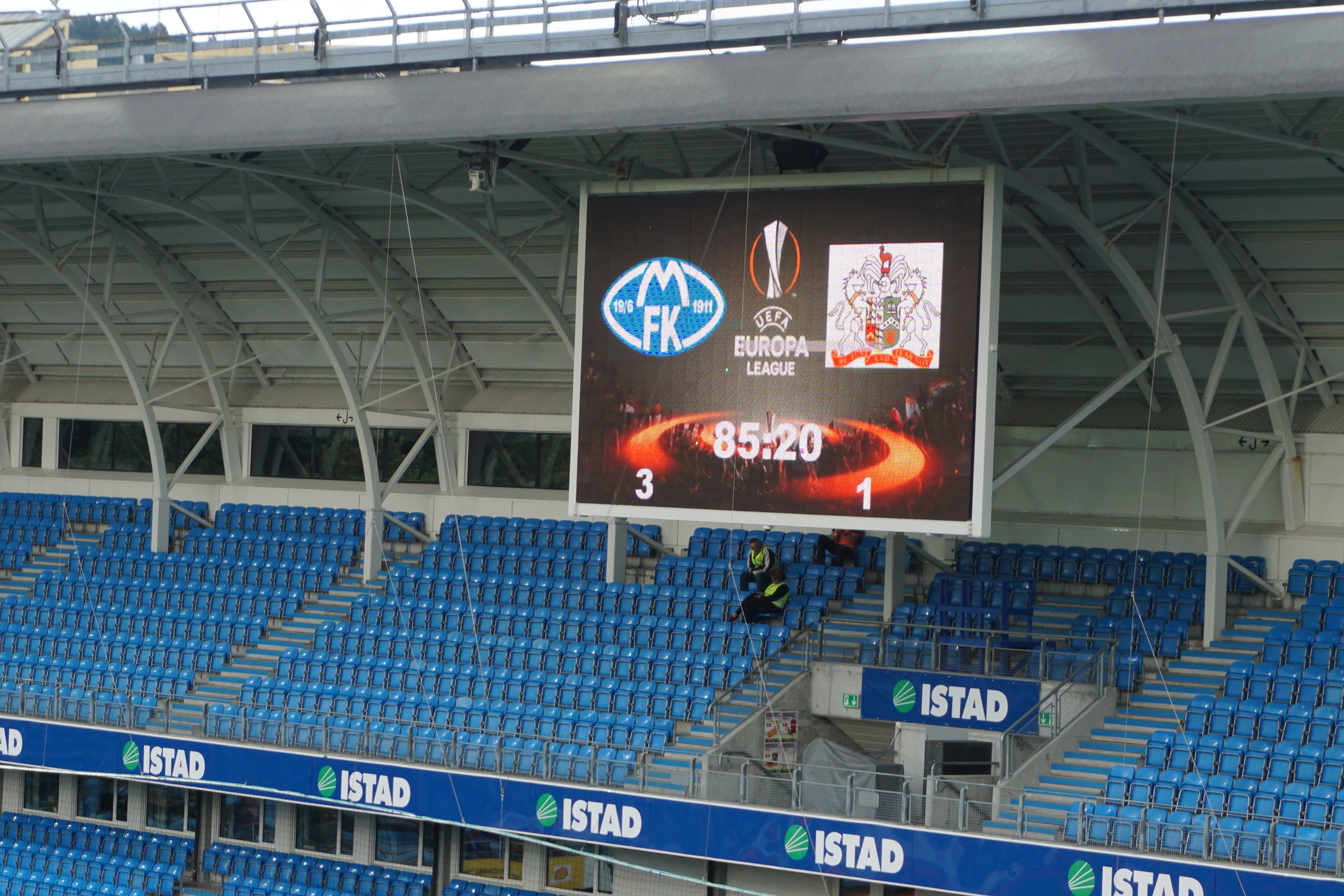 Alas it was not to be as the sterling effort and work rate began to take its toll and Molde scored two stoppage time goals to progress to the second qualifying round 6-3 on aggregate.

Molde were missing teenage striker Erling Haland who was away on U19 duty with Norway but Daniel Chima proved to be a worthy replacement. Inside the first two minutes he had the ball in the net from a cross to the far post and, at first, the referee did signal a goal despite it being clear that Chima had handled the ball. Fortunately he then reversed his decision, perhaps after advice over the headset from his assistant, and correctly awarded Glenavon a free kick.

Two minutes later and James Taylor, deputising in goal for Jonny Tuffey who was unavailable, made the first  of a number of excellent stops as he dived to his left to push Fredrik Brustad’s powerful header away to safety.

After that initial scare Glenavon began to settle into the game and in the 10th minute Caolan Marron played a ball down the right to Stephen Murray and he pulled it back to Steo Donnelly but the keeper got down and made a comfortable save from his low shot.

Andrew Doyle, who was Captain for this game, had to be alert to snuff out the danger and deny Mattias Mostrom an opportunity to shoot from inside the box.

Chima then set up a chance for Etzaz Hussain but the midfielder dragged his shot well wide. A minute later and a low cross into the box by Murray posed some real danger to Molde but a defender just got a touch to take the ball away from Josh Daniels and Donnelly.

Eirik Hestad, who scored the Molde goal at Mourneview Park, then worked himself a great opening but elected to pass to Brustad rather than trying a shot himself.

Molde were then gifted the chance to level the aggregate score in the 28th minute when Sykes attempted to clear a ball that bounced in the 6 yard area only to have it slice off his boot and bounce onto his arm. The referee immediately pointed to the spot for a deliberate hand ball, a decision that seemed incredibly harsh. Hussain sent Taylor the wrong way to make it 1-0 to the home side.

Four minutes later Sykes was on a surging run forward when the referee adjudged him to have been fouled about 25 yards out. Andy Hall took the free kick which Andreas Linde pushed over the bar before he safely held the resulting Hall corner.

In the 34th minute Hestad scored what was probably the best goal on the night when he dribbled his way into the box before playing a one-two with Chima before coolly rounding Taylor to slot in his first of the match.

Both sides made substitutions at half time. In a tactical switch Robbie Norton replaced Donnelly and was handed a man-marking job on Hestad which he did superbly. Molde replaced their Captain Ruben Gabrielsen who had picked up a knock in the first half, with Stian Gregersen.

Glenavon got on the front foot right from the start of the second half. Another good cross by Murray again saw a slight touch from a defender’s boot take the ball away from a Glenavon attacker, in this case it was Niall Grace who was thwarted.

Gary Muir and Taylor both broke up Molde attacks before Hestad smashed in his second goal of the game, rifling a shot into the roof of the net from a cutback from Chima. The officials in this case failed to spot the use of an arm by Chima to control a deep cross which allowed him to lay on the assist for the goal that made it 3-0 on the night, 4-2 on aggregate in the 58th minute.

Four minutes later Andy Hall crossed low into the Molde box and this time the defence was not so fortunate as Forren’s touch deflected the ball past his own keeper and sent it looping into the net making it 3-1 on the night and 4-3 on aggregate. Glenavon now knew that another goal would level the aggregate score and send the Lurgan Blues through on the away goals rule.

With nothing to lose, Glenavon threw caution to the wind and Sykes’ surge into the Molde box was blocked off with the referee waving away Glenavon’s appeal for a penalty. Murray and Sykes then combined on the right with Grace nodding on Sykes’ cross for Daniels to strike, Linde making a routine save.

Taylor then did brilliantly to deny Molde substitute Ibrahima Wadji with a superb point-blank save in the 78th minute. Three minutes later Hestad spurned the chance to complete his hat trick when he blazed high over the bar from another excellent setup by his strike partner Chima.

Gary Hamilton brought on young striker Jordan Jenkins with just over five minutes remaining and soon he was into the action as he looked to get on the end of a testing ball into the Molde box, JJ being one of five Glenavon attackers looking to capitalise on any defensive errors or a bit of good luck should the ball break their way. Instead the referee awarded a free kick against Jenkins with the youngster claiming his shirt was being pulled on the ref’s blind side.

Hestad settled the tie and completed his hat trick as the game entered stoppage time. Again Taylor made a great point-blank save from the striker’s initial effort but his luck ran out as the ball rebounded back off the Molde player and rolled into the net.

Babacar Sarr glanced in the 5th goal in the 93rd minute to complete the 5-1 score line with there being barely enough time for the restart before the ref blew the final whistle. 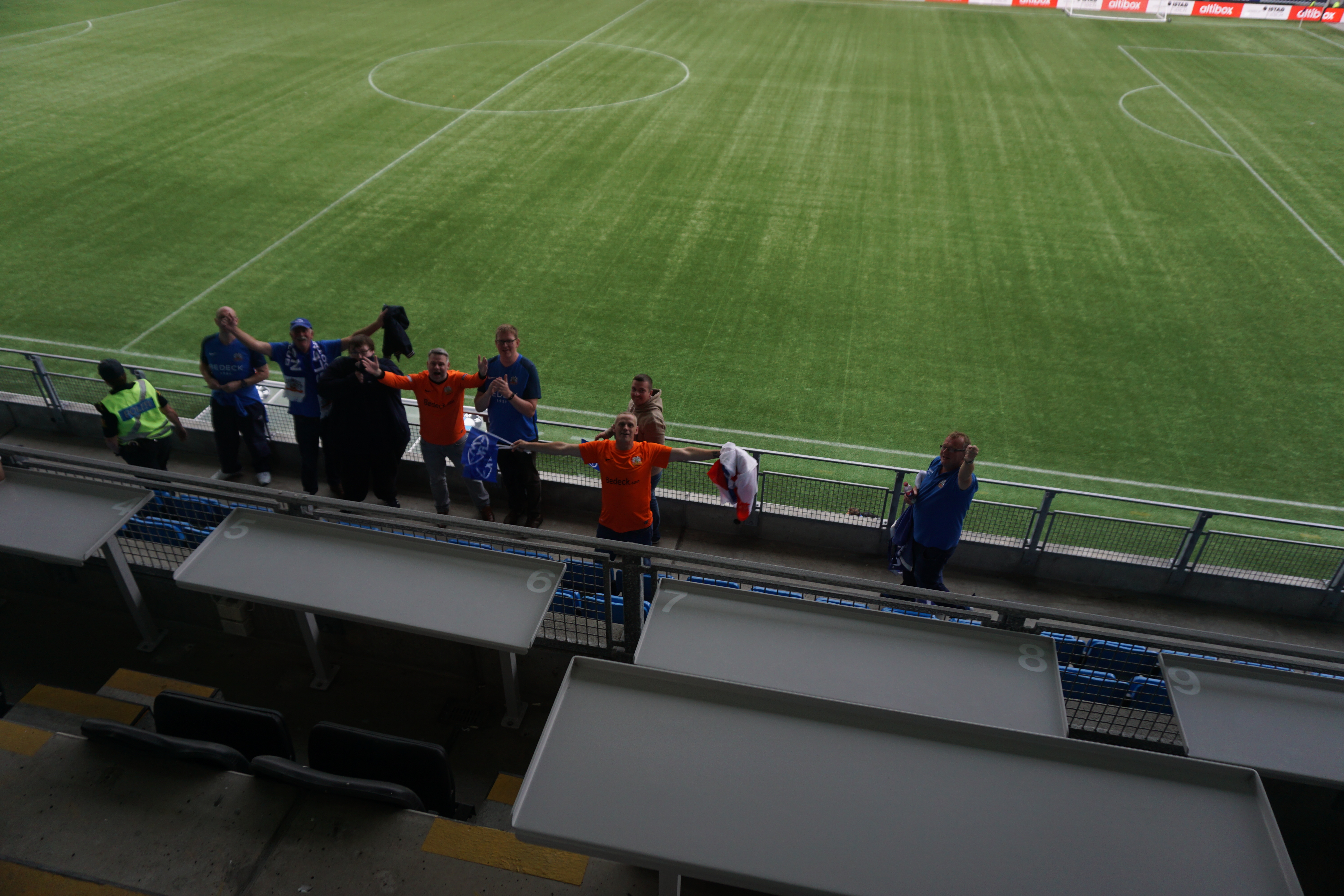 Glenavon fans were still in good spirits after the game despite the result.

Molde coach Ole Gunnar Solksjaer said after the game “It was very exciting, maybe a little too exciting! In training you think the fight is decided or written a little along the way so it’s not good for my heart!” (Translation by Google Translate).

Gary Hamilton, speaking after the game said “I’m extremely proud of the lads for the amount of effort they put in – I felt they were, again, outstanding to a man.

“I was disappointed by a couple of the decisions from the referee. We felt the penalty awarded against Mark Sykes was extremely harsh and, for the third goal, their player controlled the ball with his hand before he laid it off to Hestad who scored it.

“We maybe could have had a couple of penalties ourselves but we gave it our best shot and the experience of  playing against a top team like Molde will stand us in good stead as we look forward to getting the season underway at home to Linfield on the 4th of August.”

Many thanks to all the Officials and supporters of Molde FK and the people of Molde who made us all very welcome to their football Club and to their beautiful town. 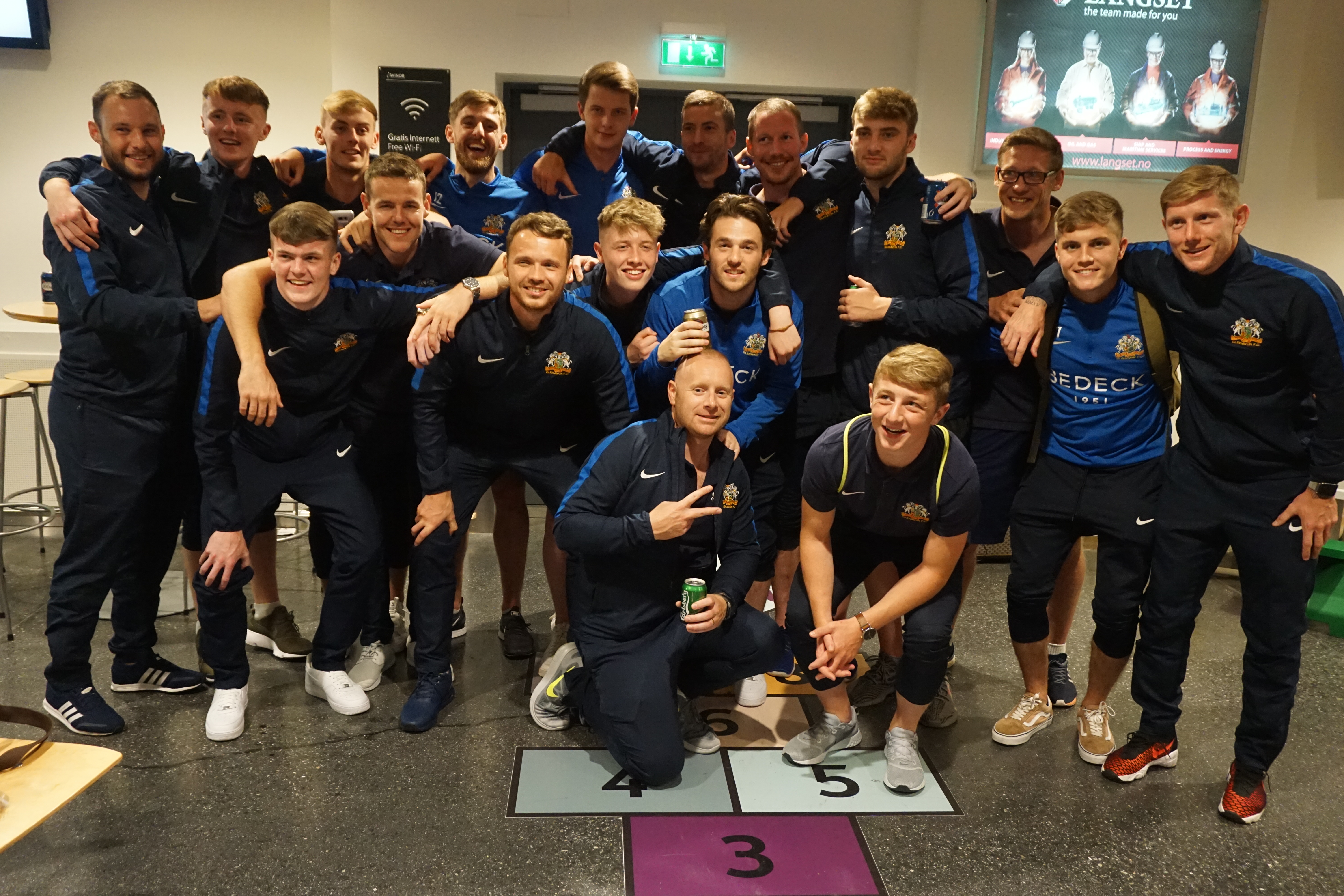 Finally ready to board the return flight after a three hour delay.