An outstanding display by Glenavon keeper-captain Jonny Tuffey frustrated the home side as he pulled off a series of superb saves to keep Glenavon always in touch in this match. In fact, once again Glenavon was denied what appeared to be a stonewall penalty four minutes before Paul Heatley put the league leaders ahead with his 25th goal of the season. With Tuffey’s heroics keeping his side in the match it fell to Andrew Mitchell to score the equaliser fourteen minutes from time, his 18th goal of the season. 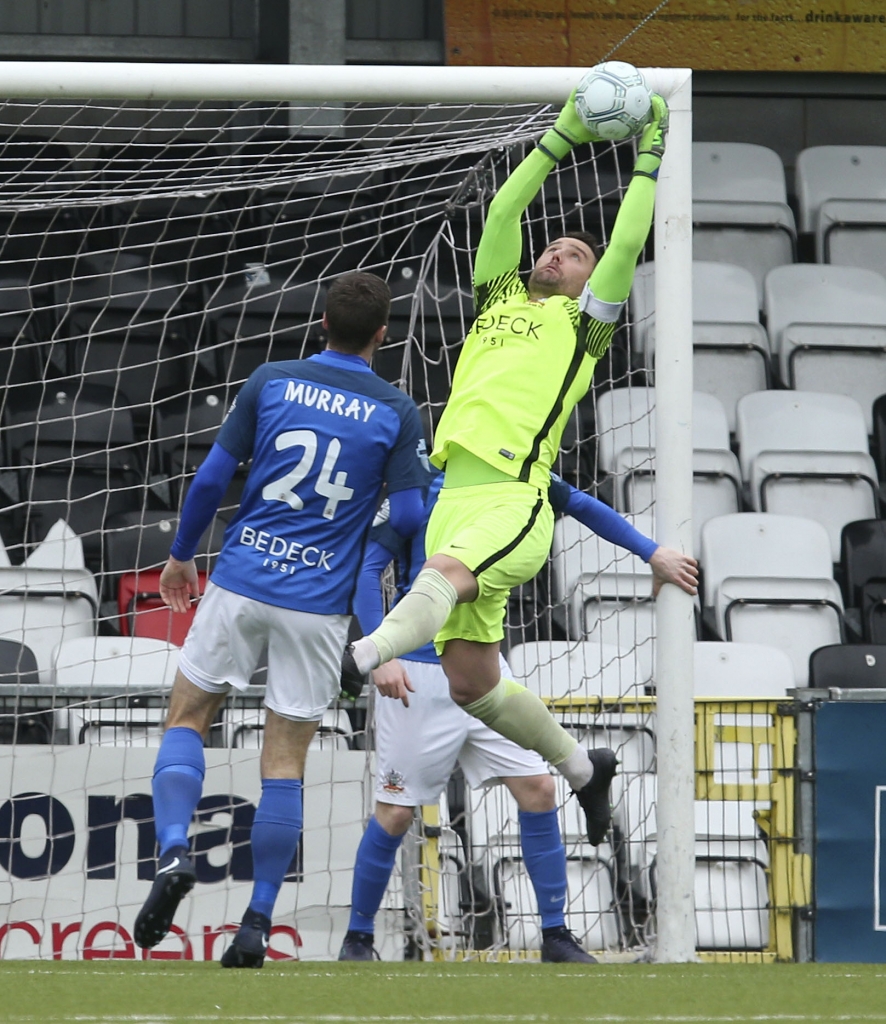 Two changes for Glenavon: Sammy Clingan is rested and Simon Kelly is only fit enough for a place on the bench. Mark Sykes returns from suspension and Andy McGrory gets a starting place.

Crusaders are without Jordan Owens and Gavin Whyte who picked up knocks against Coleraine on Tuesday night and Darren Murray, whose name was initially on the team sheet, now isn’t in the squad. 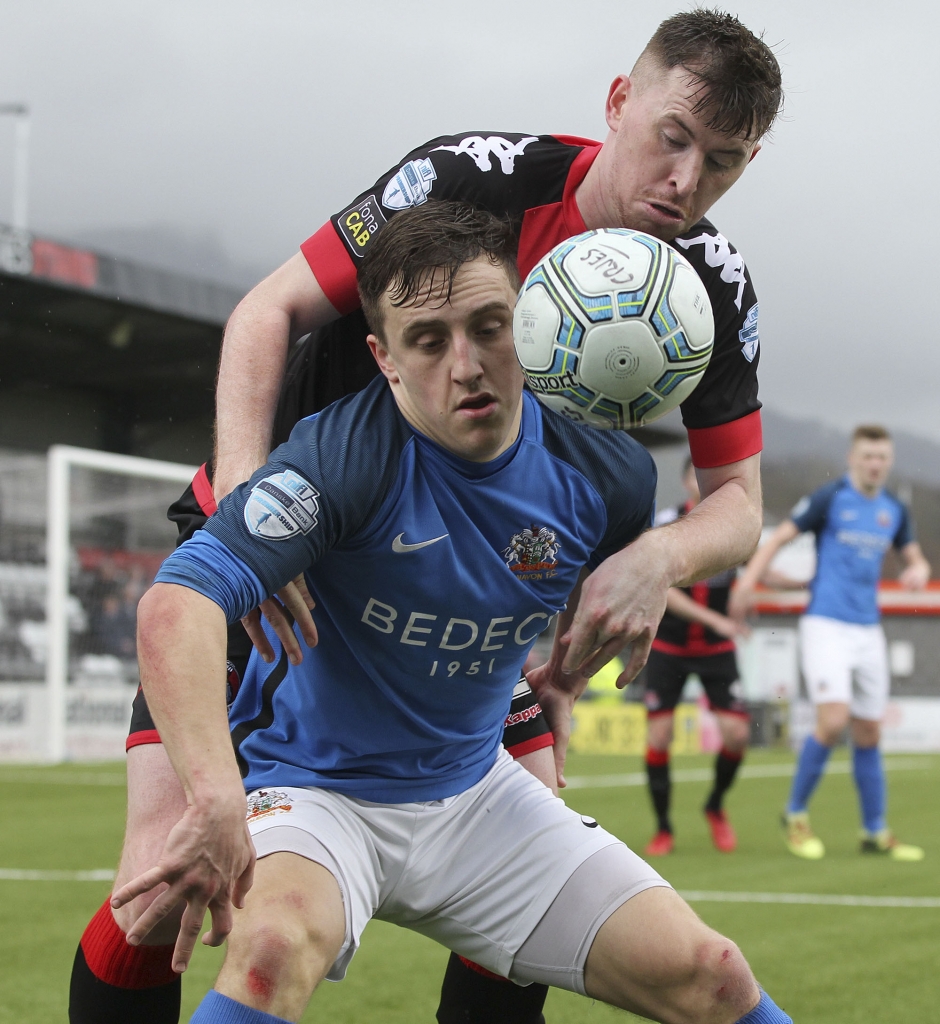 Glenavon forced the first corner of the match after 3 minutes and Doyle headed Burns’ set piece goal wards towards Mitchell with Jensen reaching over the striker but failing to grab the ball.

Sean Ward smashed a shot from 25 yards that rebounded off the bar with Tuffey beaten in the  6th minute and the defender was at it again five minutes later. This time his first time effort from the corner of the box was well saved by the Glenavon keeper.

Carvill was the next Crues player to test Tuffey after he was picked out in the box by Lowry’s pass. 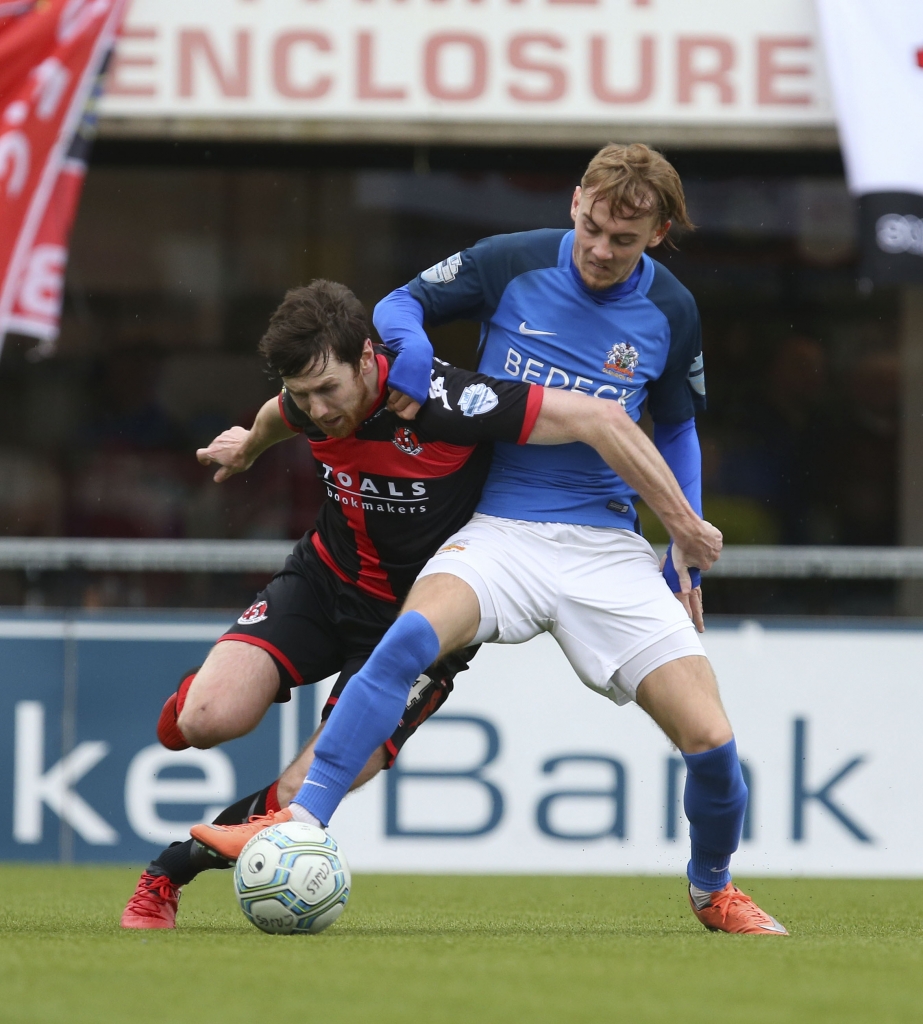 In the 24th minute Carvill forced his way past a challenge by Cooper, playing at left back today, with Marshall getting a vital touch to divert the ball out for a corner as Heatley tried to glance it towards the goal.

A minute later Glenavon had a penalty claim turned down when it appeared that Coates had impeded Sykes as he made his way into the box but the referee gave a goal kick.

In the 28th minute Daniels nodded Burns cross down to the feet of Mitchell and the striker turned but couldn’t keep his shot on target. 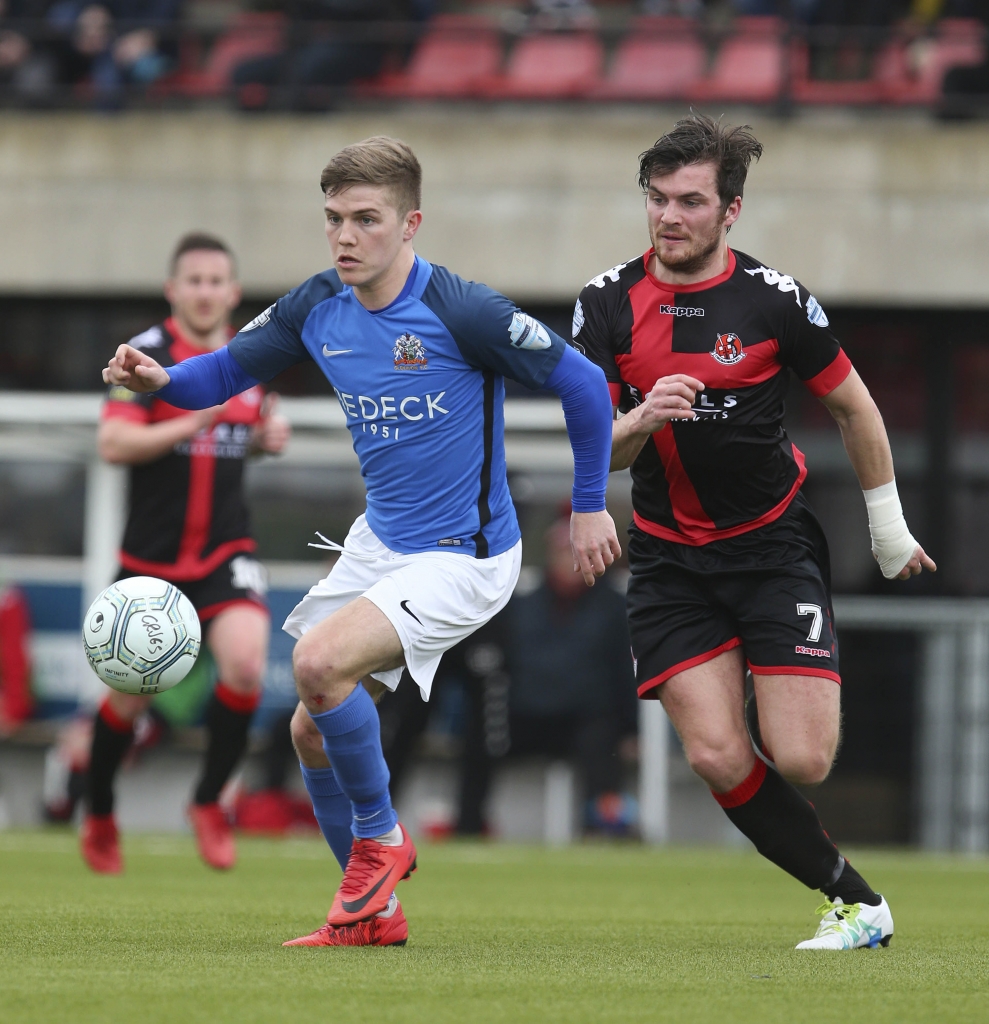 The hosts went in front in the 29th minute as Glackin’s pass released Heatley in a foot race with Singleton. Heatley drew Tuffey off his line but played a couple of one-twos with Glackin before finally firing past the Glenavon keeper for his 25th goal of the season.

Heatley almost doubled his tally for the game three minutes into the second half but for another superb save by Tuffey. This time Ward crossed from the left, Heatley took a touch before firing a low shot that the Glenavon keeper got down smartly to turn around the post.

Ten minutes later the former NI International keeper flung himself through the air to beat away Glackin’s well-struck shot before Forsythe curled a shot just wide from the edge of the D.

On the hour mark McGrory carried the ball into the Crues box and squared it to substitute Marc Griffin who was unlucky that his well-struck shot was partly blocked by the boot of Lowry, the ball looping gently into the arms of Brian Jensen.

Robbie Norton’s shot hit Mitchell on the edge of the box and the striker somehow managed to control the ball and get a shot away on the turn but the ball flew over the bar. From the goal kick Crusaders then had three attempts on target within seconds. First James Singleton stuck out a boot to block Forsythe’s shot after he was picked out by Heatley’s cross and Tuffey once again came to Glenavon’s rescue as he got down to save Forsythe’s follow-up effort. The danger wasn’t over yet though as the ball broke to Heatley but McGrory got in a block at the expense of a corner that Glenavon cleared.

Andy Mitchell grabbed an equaliser in the 76th minute when he nipped in to tuck the ball past Jensen after Mark Sykes had dribbled his way into the left side of the Crues box and saw a shot spin up off the boot of a defender. This time the deflection didn’t favour the keeper and Mitchell neatly lifted it over the big Dane from three yards. 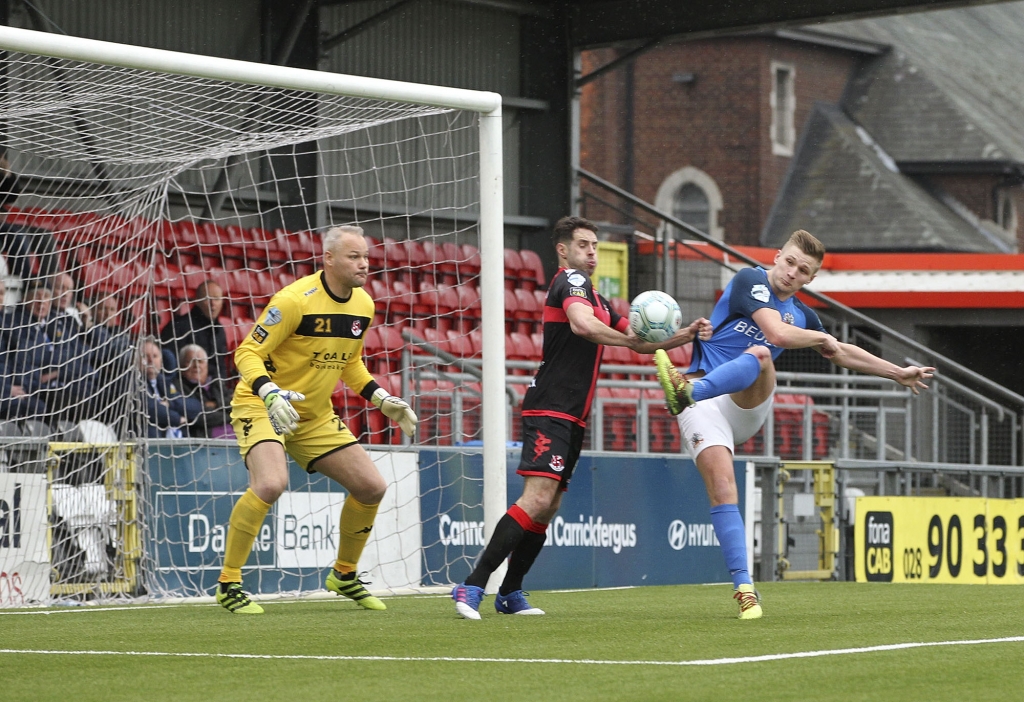 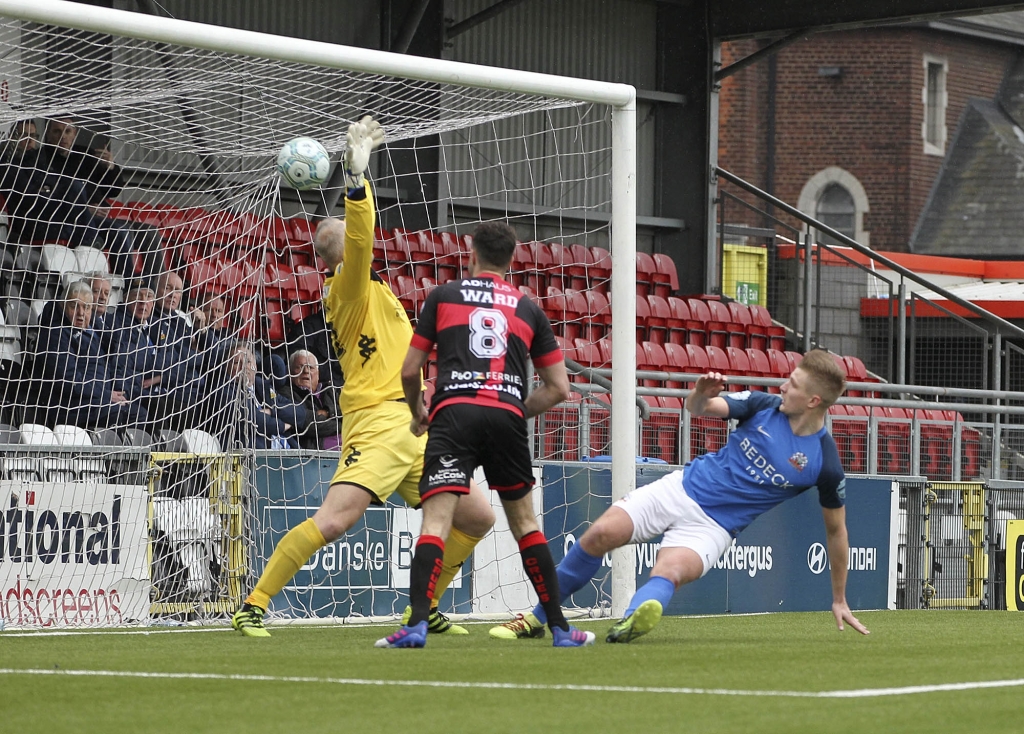 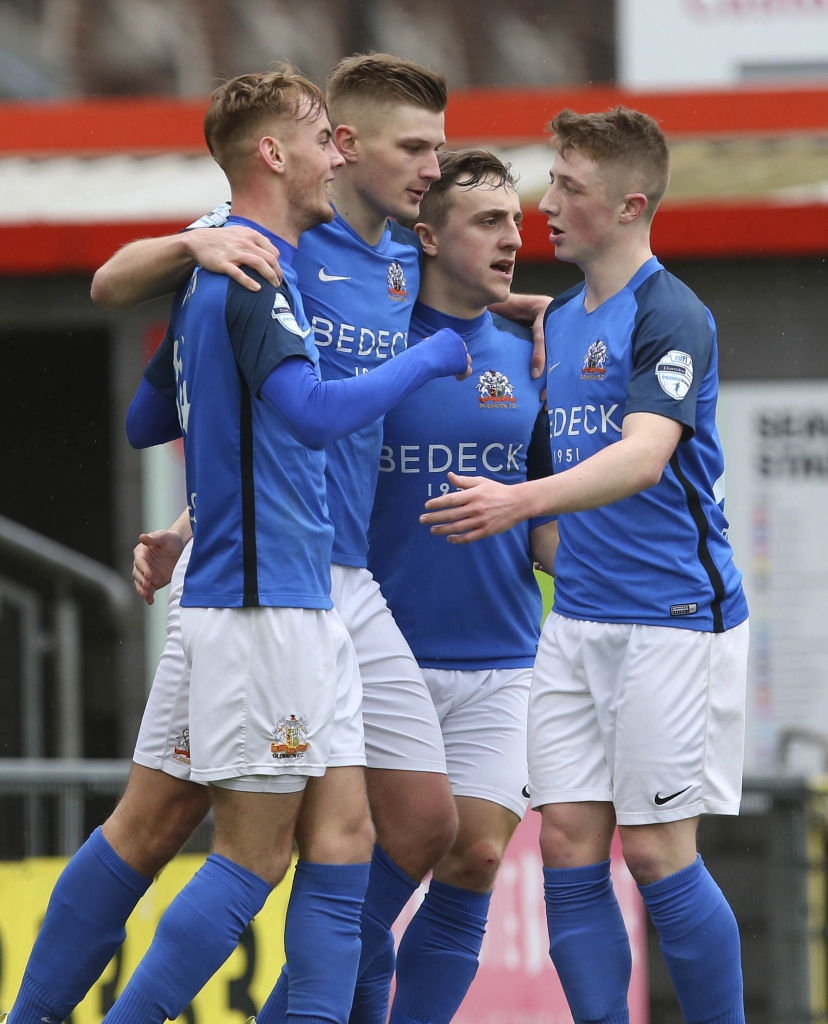 Five minutes from time Crues sub Matthew Snoddy fired a low cross-shot across the area with fellow substitute David Cushley just failing to make contact as he slid in at the far post.

Robbie Norton almost pulled off a repeat of his superb goal at this venue last season when his driven shot clipped the top of the cross bar before the home side threw everything at Glenavon in the three minutes of added time but in the end the league leaders had to settle for the point that keeps them ahead of Coleraine on goal difference.

Glenavon will travel to Solitude next Saturday with renewed hope of regaining that vital 3rd spot and possible automatic European qualification. 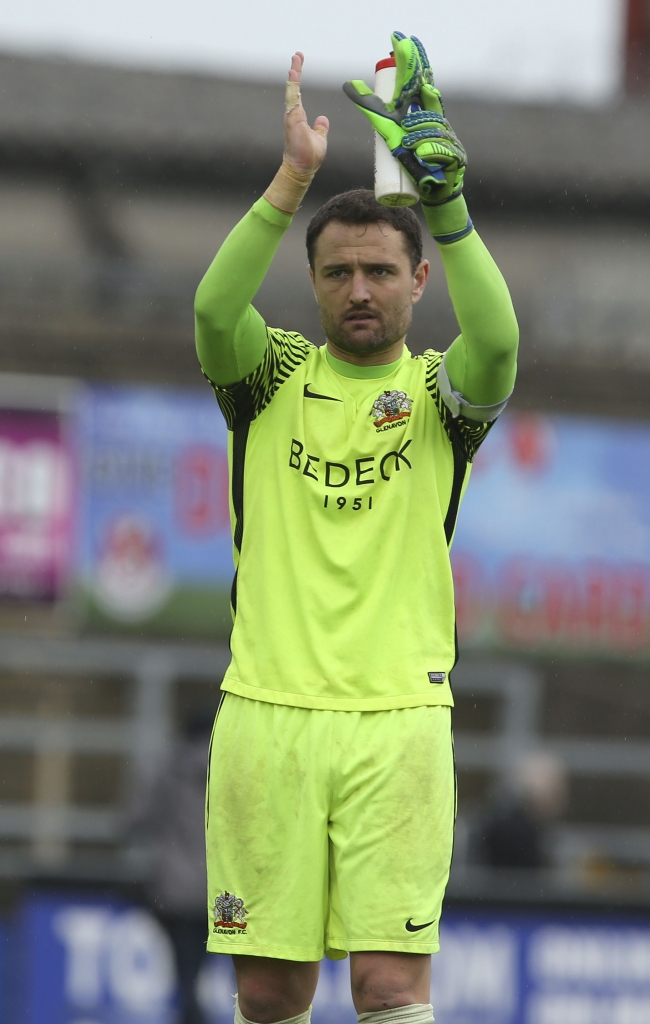