Andrew Doyle headed the hosts in front on eight minutes, but Lorcan Forde’s goal in injury time at the end of the first half meant that the sides went in level at the break.

Conor McMenamin put the visitors in front shortly before the hour mark, but Glenavon hit back with two goals in quick succession from Joel Cooper and Stephen Murray to go 3 – 2 in front.

However, Alan Davidson’s goal in the 69th minute ensured that Warrenpoint left Lurgan with a share of the spoils.

There was a flashpoint as early as the second minute, when Mark Sykes and Davidson were involved in an altercation close to the corner flag which resulted in both players being shown a yellow card. Sykes appeared to throw the ball at Davidson and the Warrenpoint midfielder reacted angrily, shoving him in the face. Sykes went down and the home supporters called for Davidson to be given his marching orders. They were livid when referee Raymond Hetherington made the decision to caution both players.

Glenavon really should have gone in front in the seventh minute. Andrew Hall played an excellent diagonal ball into the box to pick out the unmarked James Singleton at the far post. With the goal at his mercy, the left-back smashed his shot into the face of Warrenpoint goalkeeper Jonathan Parr.

However, it did not prove to be a miss which Glenavon rued, because they went ahead from the resulting corner. Bobby Burns’ delivery picked out Andrew Doyle, who had come into the starting line-up when Simon Kelly got injured in the warm-up. The defender directed his header into the bottom corner to open the scoring. 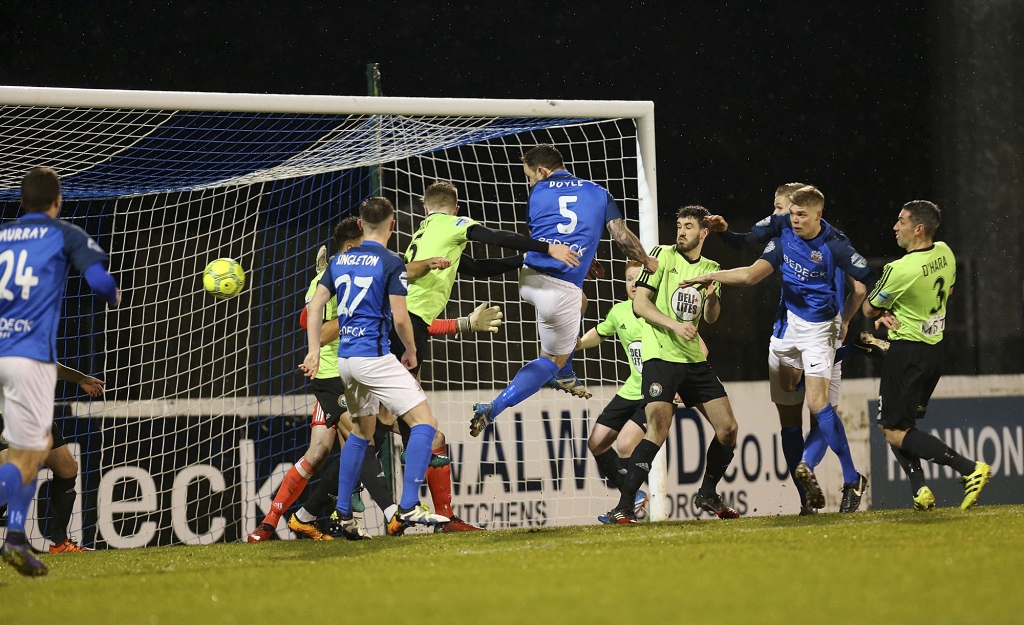 Andrew Doyle makes it 1-0 to Glenavon. Photo by Alan Weir 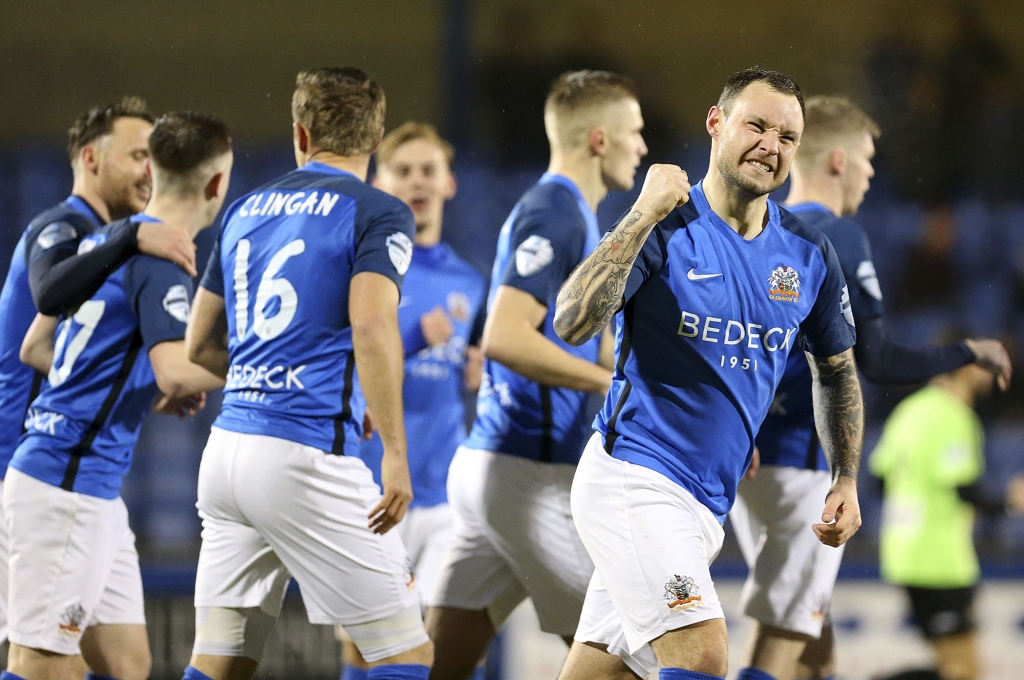 Five minutes later Glenavon almost doubled their lead when Hall whipped a wicked free-kick across the face of goal which went narrowly wide of the far post.

Warrenpoint threatened on 15 minutes. Sean Mackle played the ball inside to Martin Murray, who curled in a shot which required a smart save from Jonathan Tuffey.

Murray was to be denied again just before the half-hour mark, this time his shot was excellently blocked by Singleton. But the visitors were coming more and more into the game as the half wore on, and it was no surprise that they equalised in first-half injury time. 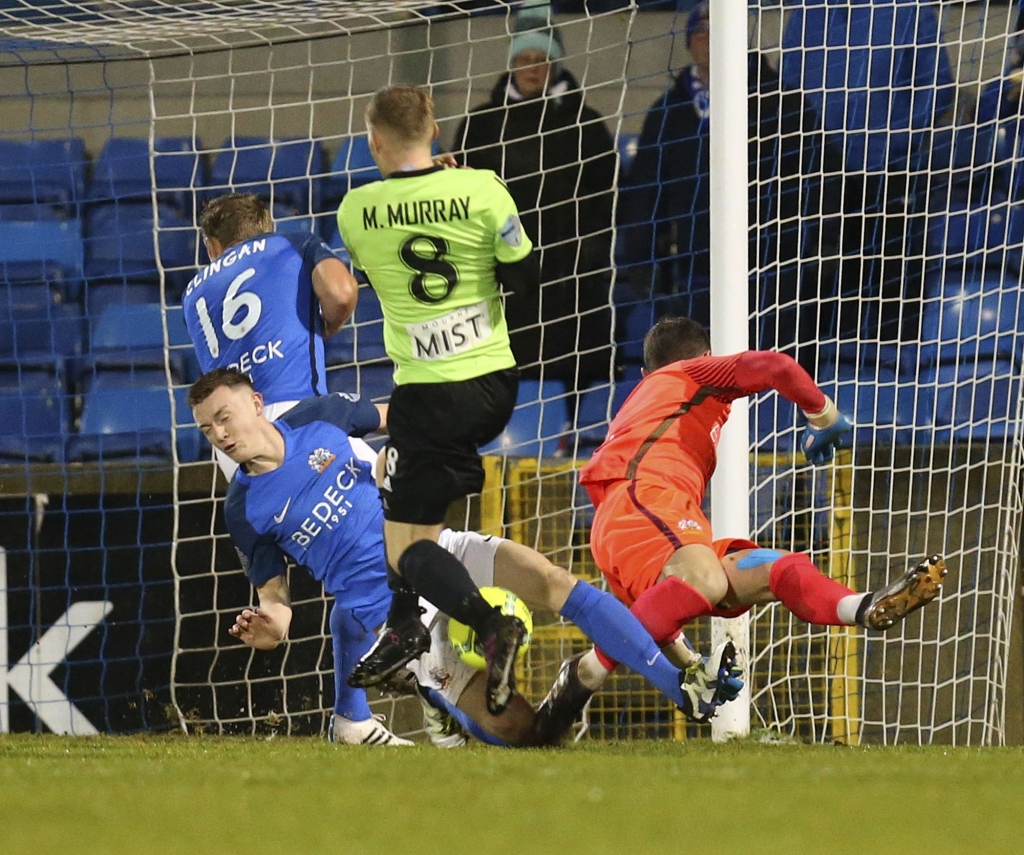 Glenavon failed to clear McMenamin’s long free-kick into the box and the ball fell for Davidson. Tuffey made an excellent save to keep out his effort, but the rebound went to Forde. Tuffey did well again to get his left boot to the young forward’s shot, but the ball spun up off him and nestled in the far corner.

Davidson was lucky not to see a second yellow in first-half stoppage time when his poor challenge left Burns with a gashed shin that would see him replaced early in the second half.

The excellent Forde was at the heart of things again when Warrenpoint went in front on 57 minutes. He turned Doyle on the left flank before playing a low cross into the penalty area with the outside of his right boot. Caolan Marron’s attempted clearance only went as far as McMenamin, and the striker lashed his low shot into the net.

Glenavon were only to be behind for two minutes. It was revealed during the week that Joel Cooper has signed a pre-contract agreement with Linfield, but the winger was brought on to replace Burns, and he had a near-immediate impact on the game.

Hall tried to slip a pass through for Murray, but it was cut out by Jordan Dane. The ball fell to Cooper on the edge of the box and he struck a peach of a shot with his left foot which flew into the far top corner.

He was involved again a couple of minutes later as Glenavon went in front. Singleton played a long ball over the head of Warrenpoint captain Stephen Moan and into the path of Cooper, who fizzed in a brilliant first-time cross over which picked out Sykes. The midfielder’s volley struck first the post and then Parr, but the ball eventually fell to Murray. The former Warrenpoint striker drilled his low shot into the bottom corner to make it 3 – 2. 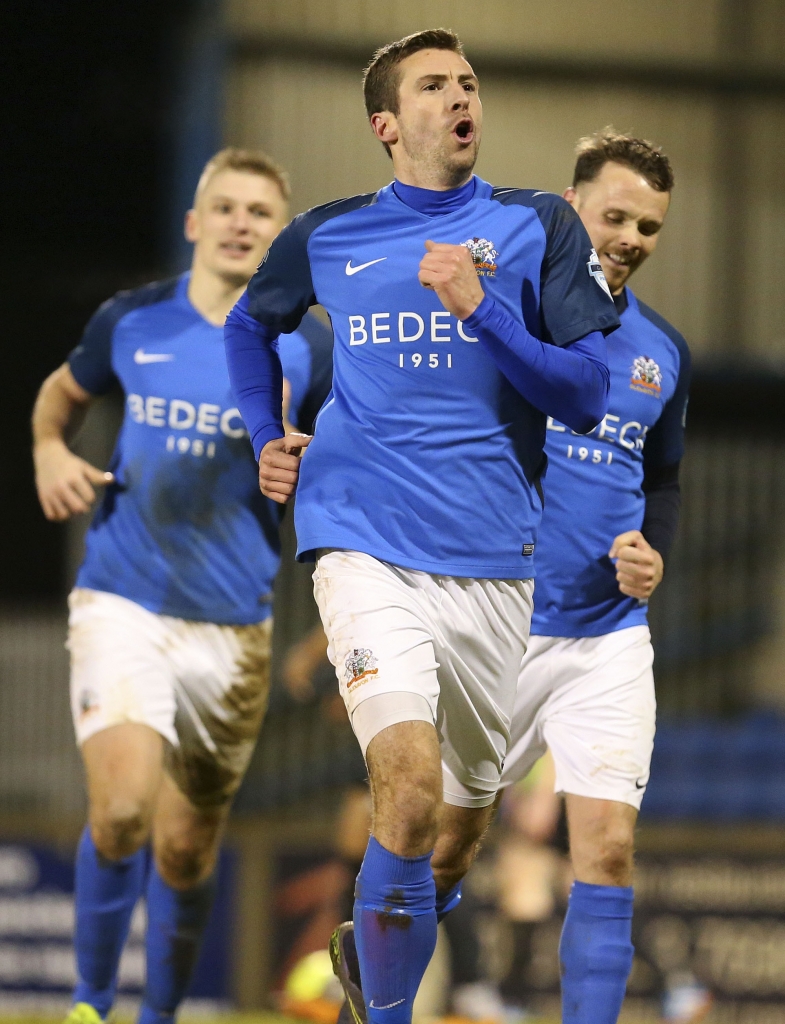 Stephen Murray celebrates after putting Glenavon back in the lead. Photo by Alan Weir

The visitors came back to level things in the 69th minute. Tuffey’s weak clearance fell to Forde and he slipped the ball through for Davidson. The former Glenavon man made no mistake, coolly slotting his finish inside the far post.

The closest either side came to finding a winner was when substitutes Marc Griffin and Andy McGrory were both denied by saves from Parr in quick succession. The goalkeeper atoning for an error after his sliced clearance had created the danger in the first place. The game finished 3–3.

Glenavon will be disappointed not to have built upon their excellent victory at Windsor Park last weekend by following it up with another win, but on the balance of play a draw was probably a fair result, and Warrenpoint will feel that they have finally got something to show for their efforts against Glenavon this season, having performed well in each of the three games they’ve played against the Lurgan Blues.

Monday night (January 29th) sees Gary Hamilton’s men travel to Solitude to take on Cliftonville in what is one of their two games in hand. Kick-off is 7.45pm and the match is also being broadcast live on Sky Sports.