Clingan, celebrating his 34th birthday, struck in the 92nd minute to atone for an earlier uncharacteristic error which led to Joe Gormley opening the scoring for the visitors near the end of the first half.

Glenavon were first to threaten. Bobby Burns’s free-kick from the right went narrowly wide of Brian Neeson’s right-hand post in the opening minute.

A minute later Andrew Doyle produced a good tackle in the penalty area to deny Gormley a shooting opportunity. From the resulting corner Ross Lavery picked out Garry Breen. The Cliftonville captain headed narrowly over the bar. 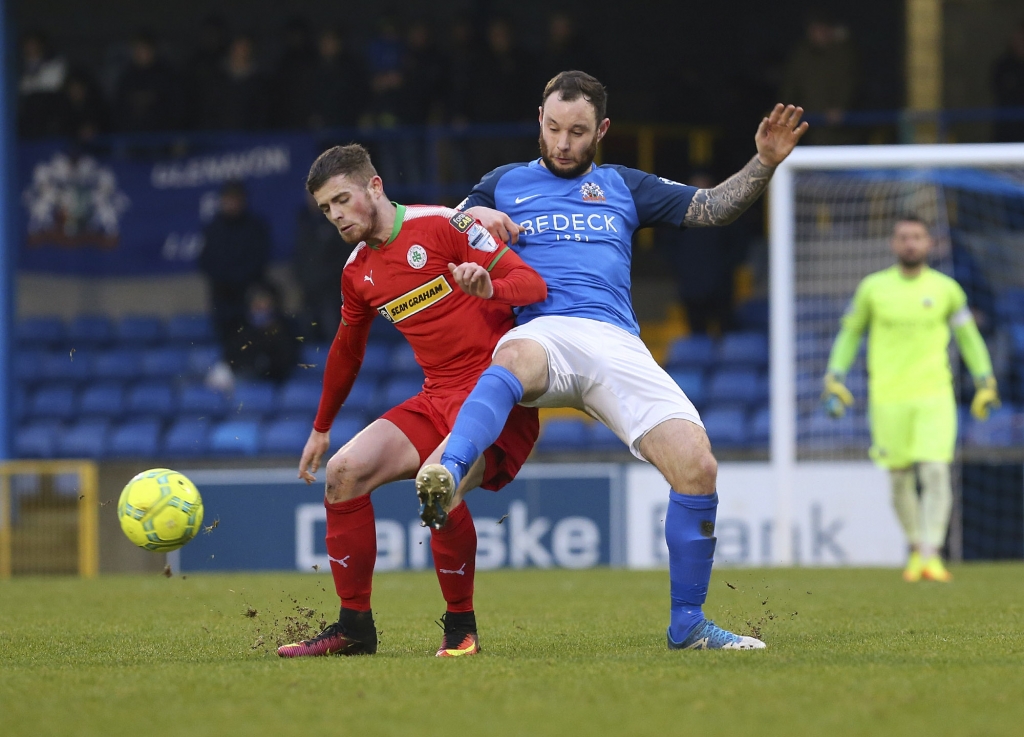 Shortly after the half-hour mark Rory Donnelly headed just over from another Lavery corner.

On 38 minutes Cliftonville hit Glenavon on the break after a last-gasp clearance from Hall’s cross. Gormley had the chance to play in Rory Donnelly, but he gifted possession back to Glenavon.

The visitors weren’t to be denied two minutes later, however. Clingan was caught on the ball on the edge of his own penalty area by Jude Winchester. The ball fell to Doyle, but his attempted clearance only found Rory Donnelly. Jonathan Tuffey dived down to his left to make an excellent save to keep out Donnelly’s shot, but the rebound fell to Gormley and he buried it to grab his 13th league goal of the season. 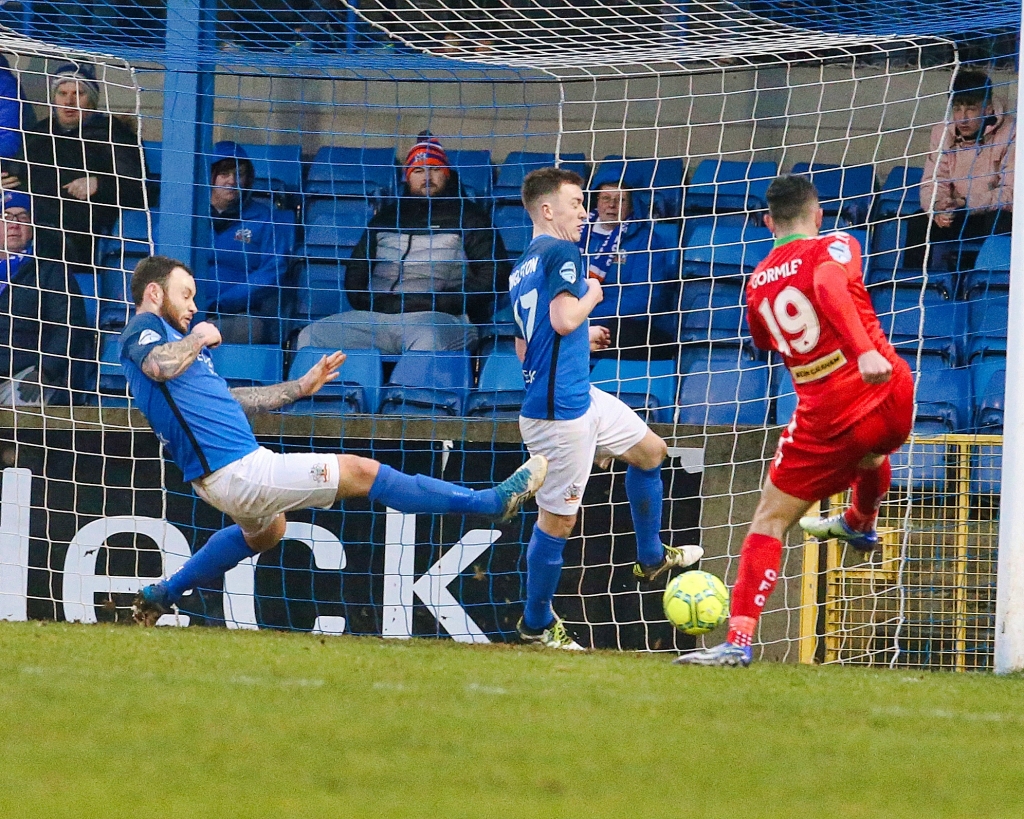 New signing Stephen Murray was brought on at half-time and his pace gave Cliftonville real problems. He ran on to fellow substitute Andy McGrory’s ball down the right flank on 57 minutes and pulled a pass back for strike partner Mitchell, who looked certain to score, only for his effort to cannon back off the post. The ball fell to Sykes and his low shot went agonisingly wide of the same post.

Five minutes later Murray was again the provider for Mitchell, this time from the opposite flank. Mitchell hooked his left-foot shot over the bar.

Murray then got a shot on target himself in the 67th minute. McGrory’s throw-in from the right found Sykes in the box. He produced a deft little flick inside to Murray, who swivelled and got a shot in despite the close attention of Breen. Neeson got down not just to save the shot but also to claw the ball out of the six-yard box and allow Tomas Cosgrove to clear. 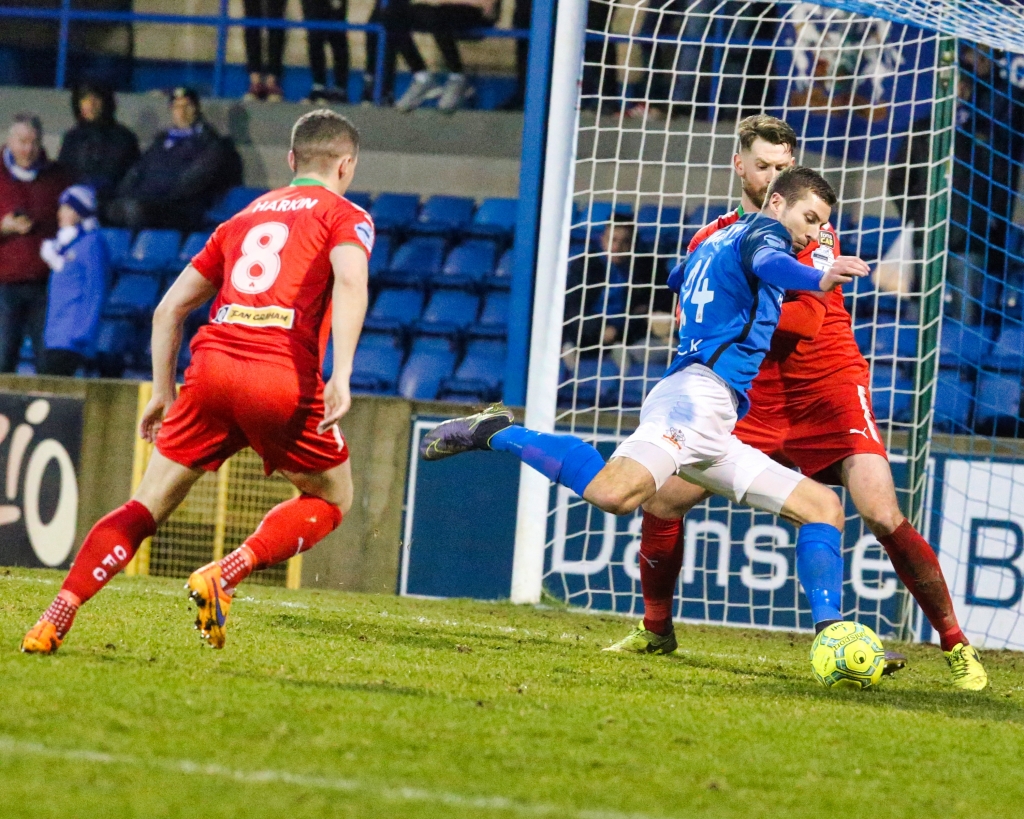 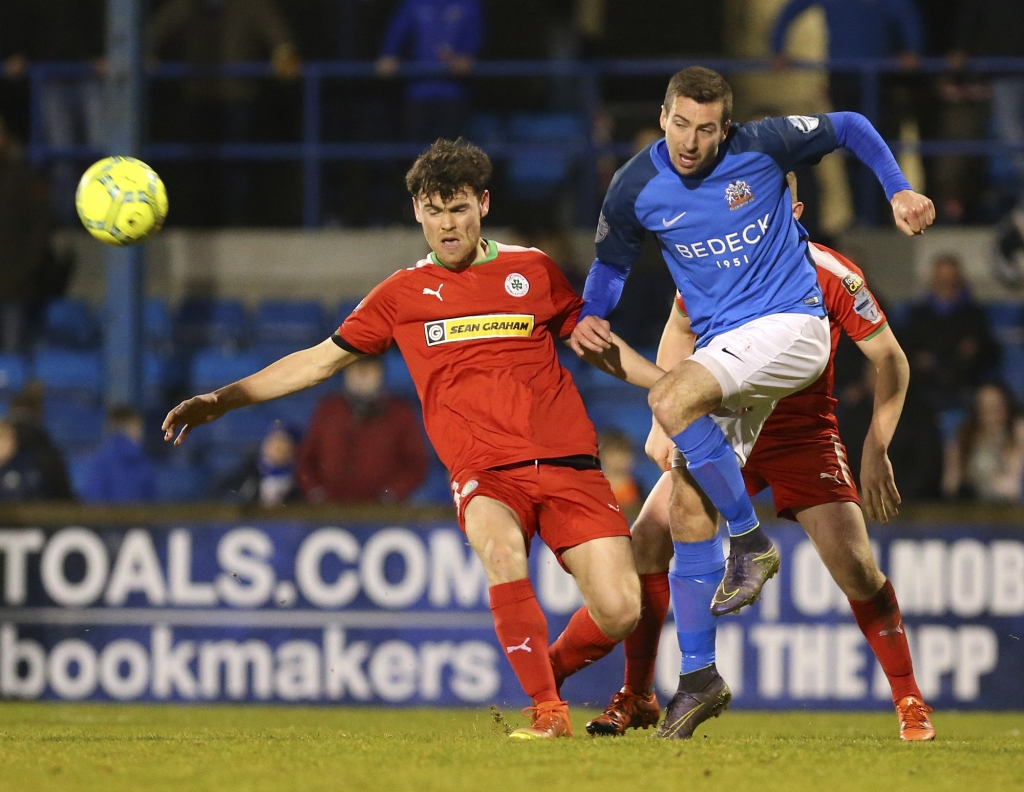 Cliftonville midfielder Liam Bagnall really should have been sent off for a second bookable offence on 70 minutes following a rash tackle on Sykes. Referee Arnold Hunter elected to give Bagnall a talking-to instead; a decision which enraged the home support. Barry Gray substituted Bagnall immediately after the incident. 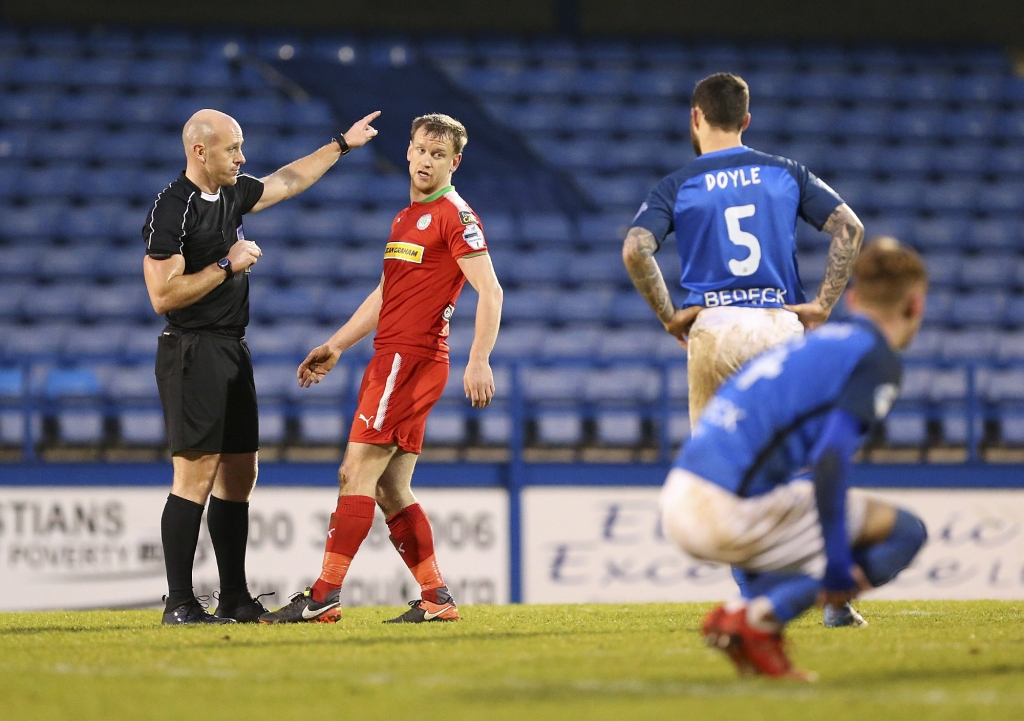 Murray set up another chance in the 86th minute. This time he picked out Burns on the six-yard line, but the winger’s shot struck the base of the near post.

A minute later Burns decided to shoot following a good build-up when he really should have tried to slip the ball to the better-positioned Sykes.

It looked as though Glenavon were going to have to accept a harsh defeat, but up stepped Clingan to rescue a point in injury time. The ball was returned to Sykes by Rhys Marshall after a throw-in on the left. The midfielder’s cross came off the knee of Breen and fell for Murray. Breen did well to get across and block the striker’s effort, but the ball bounced for Hall. The winger played a clever little pass inside to tee up Clingan on the edge of the box. The birthday boy’s low left-footed shot arrowed through the crowded penalty area and beyond the dive of Neeson to make the final score 1 – 1. 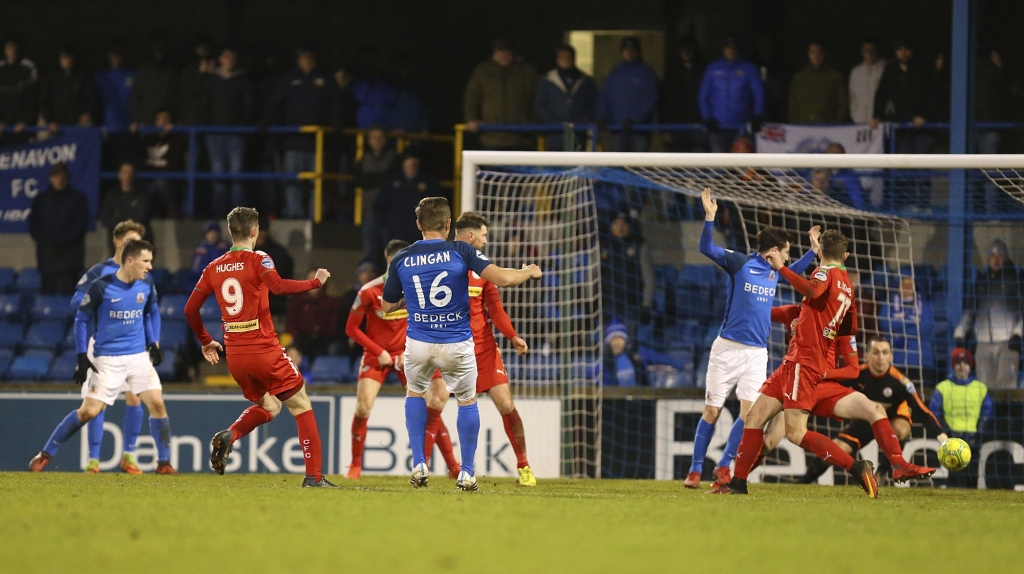 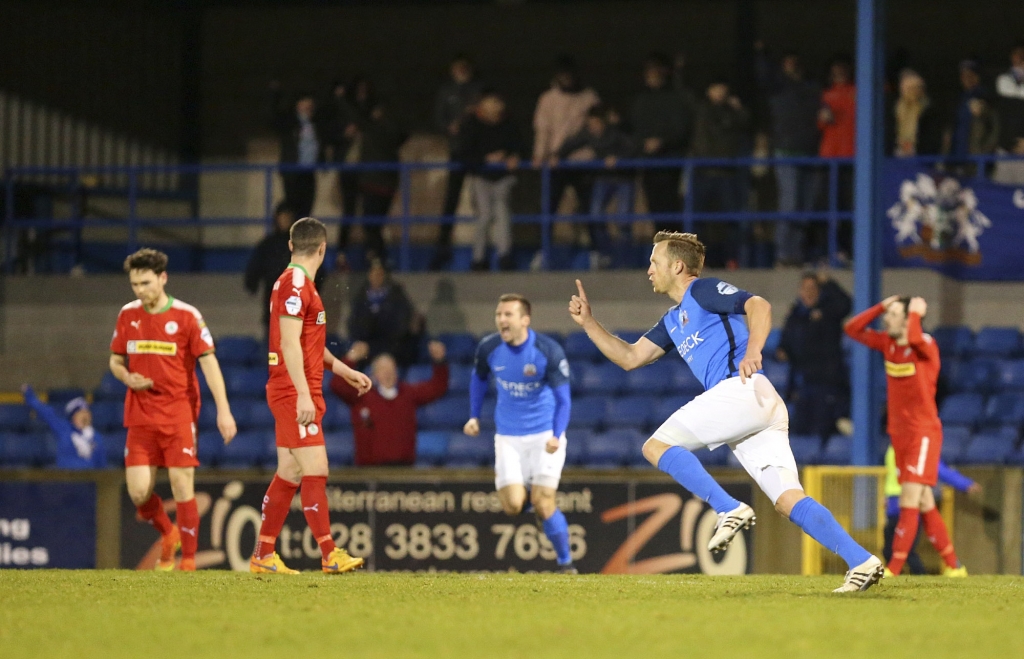 It was Clingan’s 11th league goal of the season, moving him level with teammate Mitchell.

Glenavon face another stern test next Saturday when they travel to the National Stadium to take on fourth-placed Linfield, who sit just three points behind the Lurgan Blues in the standings.