Glenavon needed extra-time goals from James Singleton and Andrew Mitchell to earn a 3 – 1 win over Carrick Rangers in the Tennent’s Irish Cup fifth round tie at the Belfast Loughshore Hotel Arena on Saturday.

Bobby Burns put Glenavon ahead just before half-time with an acrobatic effort, but Carrick captain Mark Surgenor levelled matters from the penalty spot early in the second half after Andrew Doyle was penalised, and the game was locked at 1 – 1 at the end of normal time.

Singleton converted a Sammy Clingan corner in the first period of extra-time to put the Lurgan Blues ahead, while Mitchell sealed the victory right at the death when he bundled in a cross from Glenavon debutant Stephen Murray.

Rangers ended the game with 10 men, as captain Surgenor was dismissed for a second bookable offence in the second period of extra-time.

The first opportunity of the game fell to Mitchell. Mark Sykes capitalised on some Carrick indecision to nick the ball on the edge of the home side’s penalty area and he slipped it through to Mitchell, but the striker struck a low shot narrowly wide of the far post with his left foot. 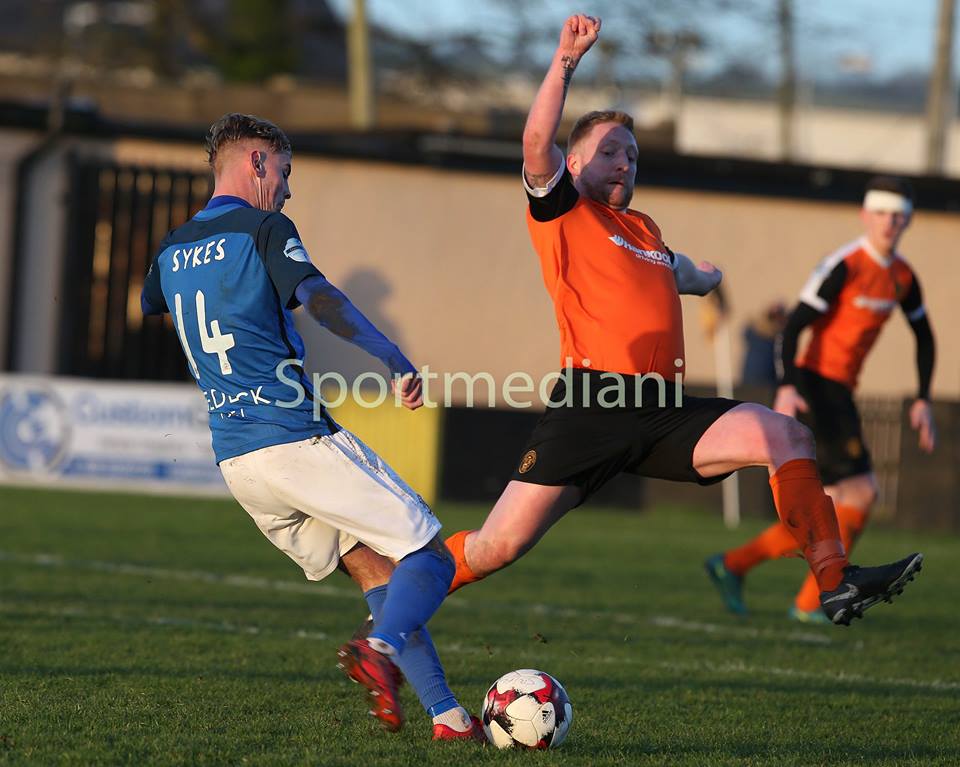 Eamon McCallister had an impressive game on the wing for Carrick. He crossed for Surgenor in the 13th minute, but the midfielder was denied by Doyle’s sliding block.

On 19 minutes Singleton might have done better when he got his boot on the end of a Burns corner, but the full-back’s effort was saved comfortably by Rangers goalkeeper Harry Doherty.

Burns then had an opportunity himself when he was picked out by a cross from the returning Andrew Hall, but his header went over the bar.

Joel Cooper had two efforts in quick succession, seeing one shot blocked, while another curled effort went narrowly over the bar. At the other end, Carrick midfielder Chris Morrow shot straight at Jonathan Tuffey from distance.

Singleton headed over just after the half-hour mark, before Sykes saw his low shot easily saved by Doherty.

However, Glenavon’s persistence finally paid off in injury time at the end of the first half. Hall’s free-kick from the left was punched clear by Doherty, but Doyle picked the ball up and did well to beat Gavin Taggart and chip a cross back into the danger area. Mitchell rose at the back post to head the ball up for strike partner Burns, who sent a spectacular overhead kick into Doherty’s right-hand corner, giving the keeper no chance. 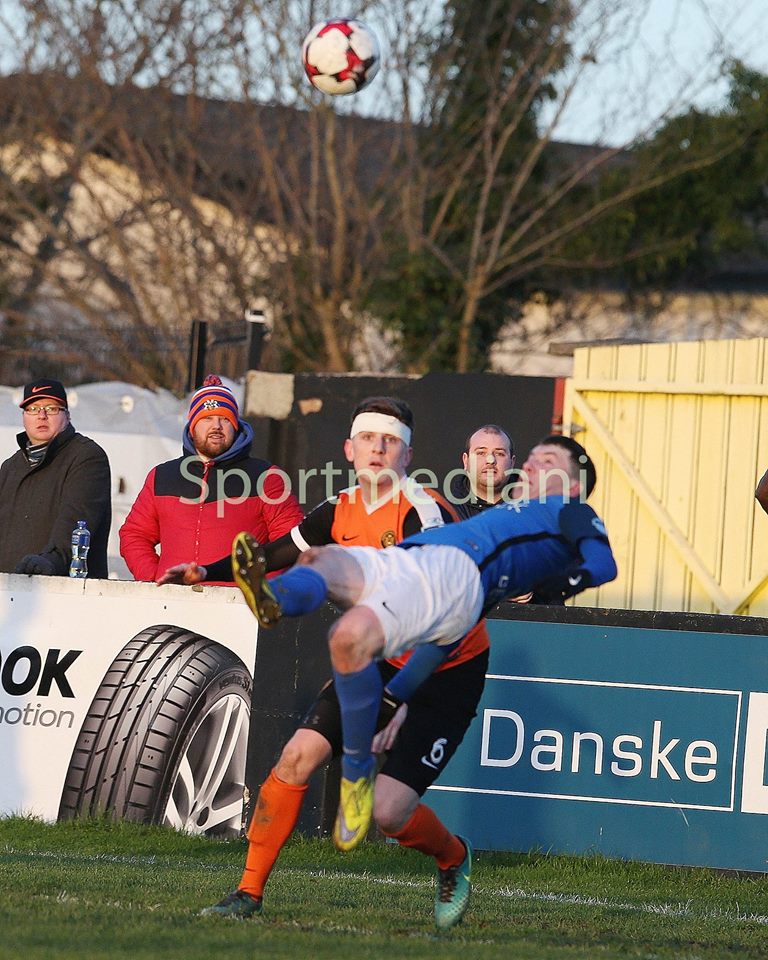 Bobby Burns opens the scoring for Glenavon with an acrobatic overhead kick. Photo by Maynard Collins

The home side levelled the tie in the 55th minute. Doyle and Surgenor jumped to challenge for the ball after Morrow had sent a long free-kick into the Glenavon box. Referee Andrew Davey pointed to the spot, although it was unclear whether Doyle was penalised for impeding Surgenor or for handling the ball. Surgenor himself stepped up to take the spot kick, sending Tuffey the wrong way and stroking the ball into the net.

Carrick might have gone ahead on 75 minutes. The dangerous McCallister evaded the challenges of Doyle and Clingan during a strong run from his own half, then slipped a through ball into the penalty area for Ben Roy. The substitute’s low shot on the stretch required an excellent one-handed save from Tuffey to ensure the score stayed level. 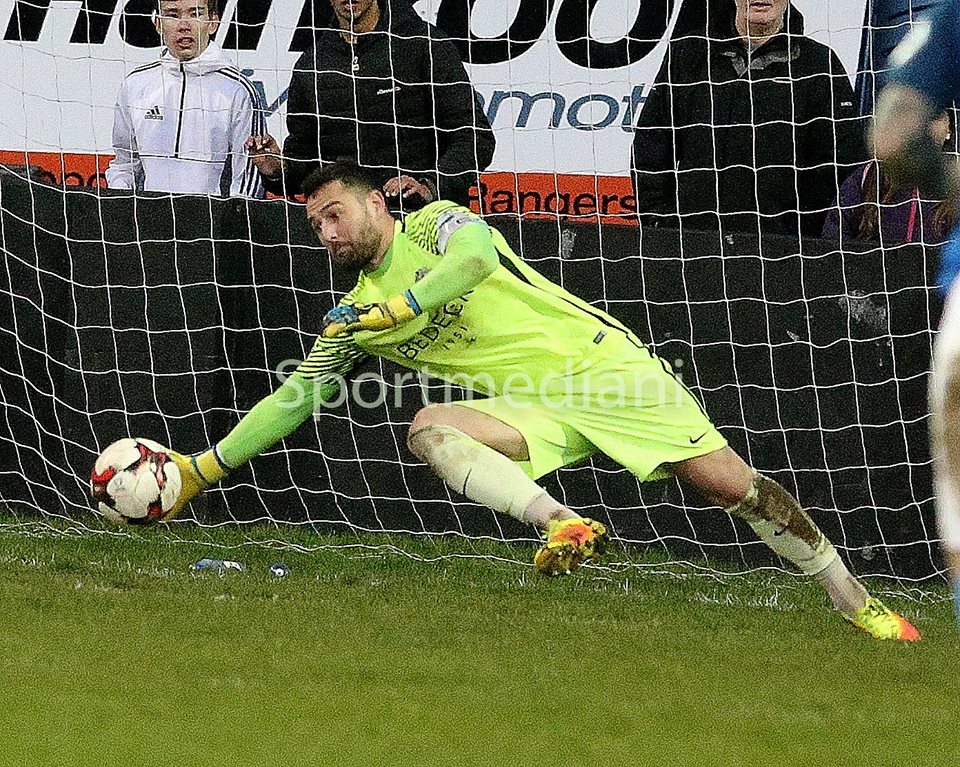 Two minutes from the end of normal time Burns burst into the Carrick box after the ball had been fed to him by Cooper, but his shot was kept out by a combination of a block from Rangers defender Aaron Smyth and a save from goalkeeper Doherty, and extra-time was required.

The Lurgan Blues were immediately on the front foot in extra-time. Cooper and Burns saw shots blocked in the opening minute of the first additional period, before Glenavon won a series of corner-kicks.

It was one of these corners that led to the visitors’ second goal. Clingan delivered from the left and picked out the head of Singleton, who made no mistake, directing his header down and past Doherty. 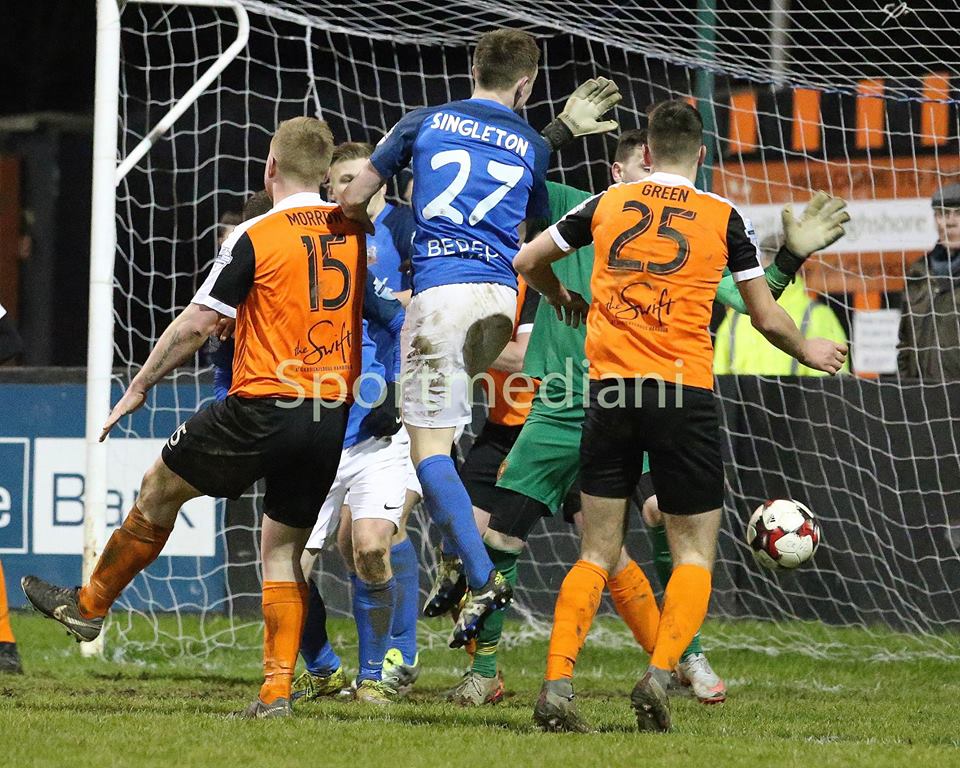 Any hope of a second Carrick fightback was effectively extinguished midway through the second period of extra-time as Surgenor was sent off for a second yellow card offence when he lunged in late on Burns.

In the final minute of the game Glenavon sealed victory and their spot in the sixth round. Sykes found debutant Murray on the right. The substitute surged into the box and drove the ball across for Mitchell, who had the simple task of bundling it over the line to make the final score 3 – 1 to Glenavon. 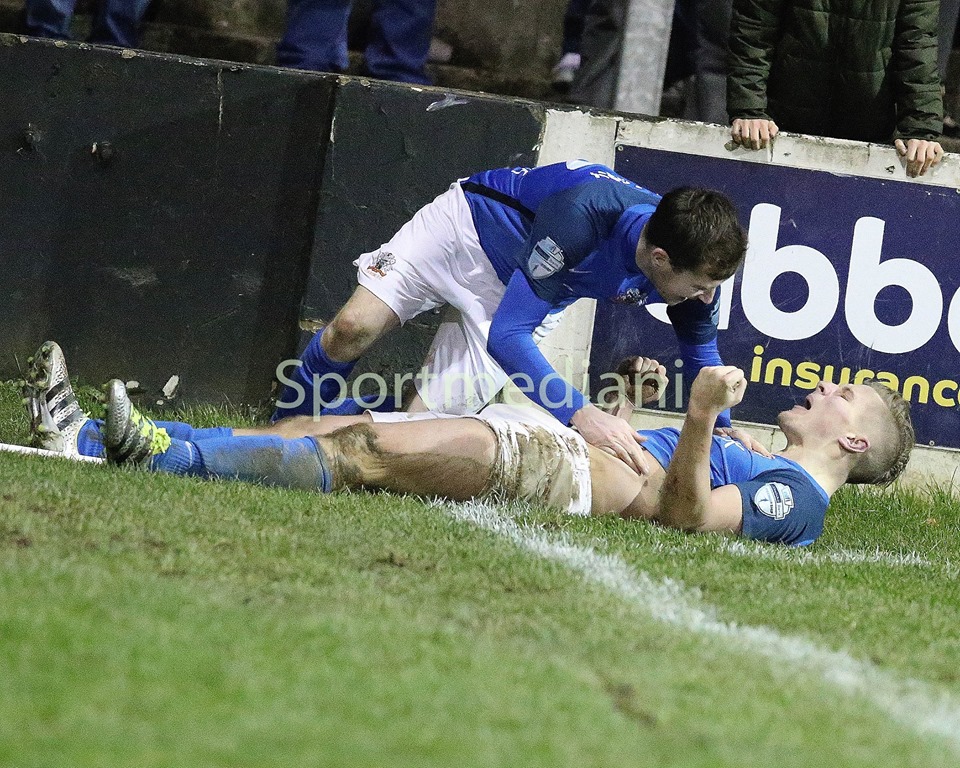 Glenavon have been handed a home draw for the sixth round of the Tennent’s Irish Cup, with fellow Premiership side and Mid-Ulster rivals Dungannon Swifts the visitors to Mourneview Park on Saturday February 3rd.

The Lurgan Blues are back in league action next Saturday (January 13th), and it will be third against fourth, as they entertain Cliftonville at Mourneview Park.