Mark Sykes was the difference-maker as Glenavon defeated a stubborn Ards side 2 – 0 at the Bangor Fuels Arena on Saturday in a feisty encounter which included nine yellow cards and ended with both sides being reduced to 10 men.

With the game heading for a scoreless draw, Sykes seized the initiative 10 minutes from time, first setting up substitute Adam Foley to break the deadlock, then sealing the three points for the Lurgan Blues by adding his own name to the scoresheet four minutes later. 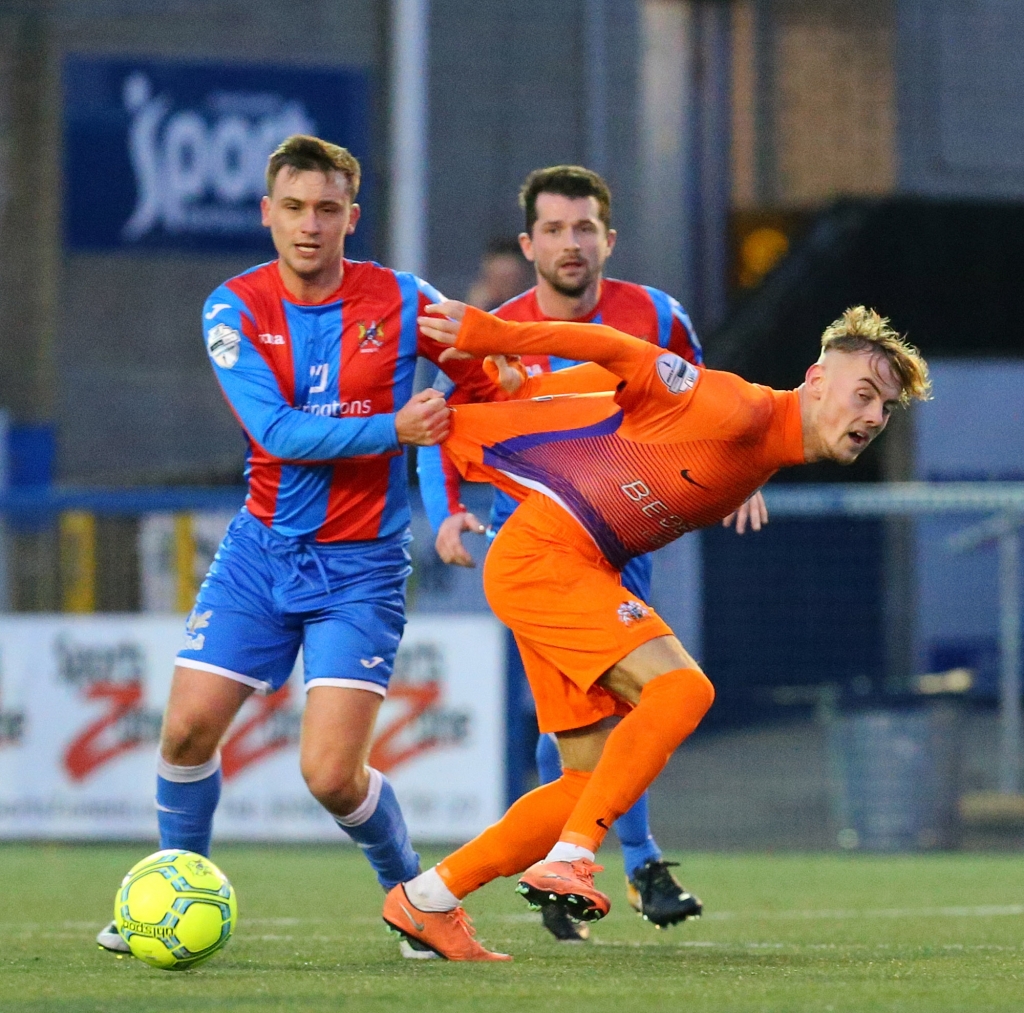 Glenavon’s Andrew Doyle was sent off for a second bookable offence shortly before half-time, while Ards’ Johnny Taylor suffered the same fate on 82 minutes.

Chances were few and far between during the early period of the game. Four minutes in Marc Griffin headed over a cross from the impressive Josh Daniels, while Ards goalkeeper Aaron Hogg denied Sykes on two occasions, as well as saving a Doyle effort from distance.

At the other end Glenavon keeper Jonathan Tuffey had to push a shot from David McCallister round the post. 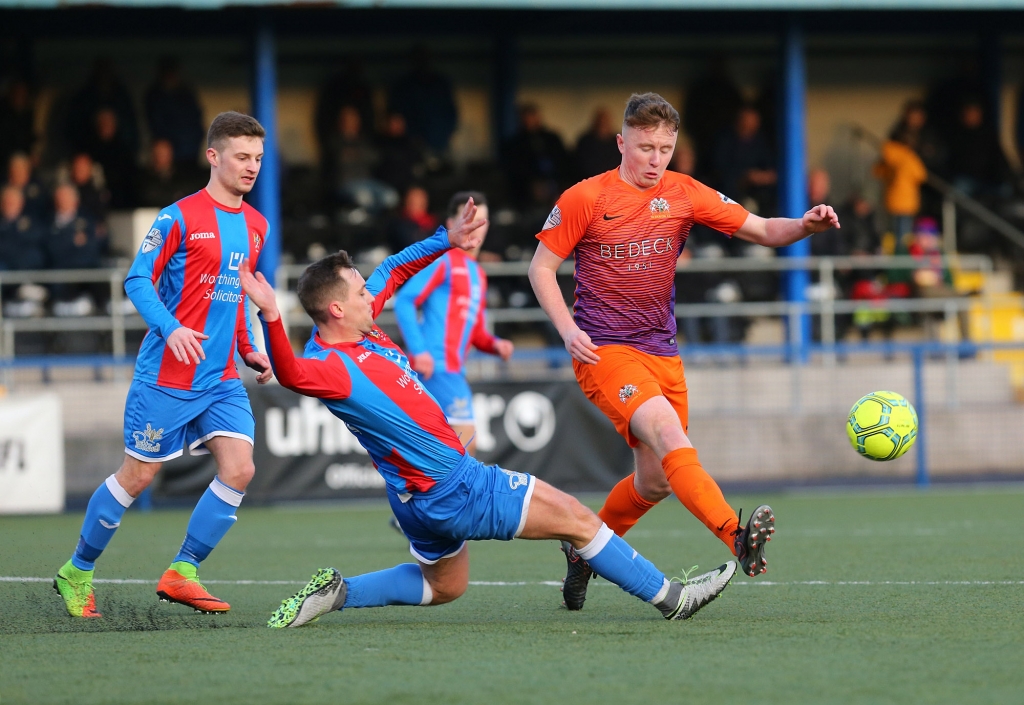 On 25 minutes Sykes went down in the box from a Craig McMillen challenge. Not only did referee Keith Kennedy ignore the penalty appeals, he also booked Sykes for diving. It was a decision which so enraged Glenavon manager Gary Hamilton that he was sent from the dugout for dissent. 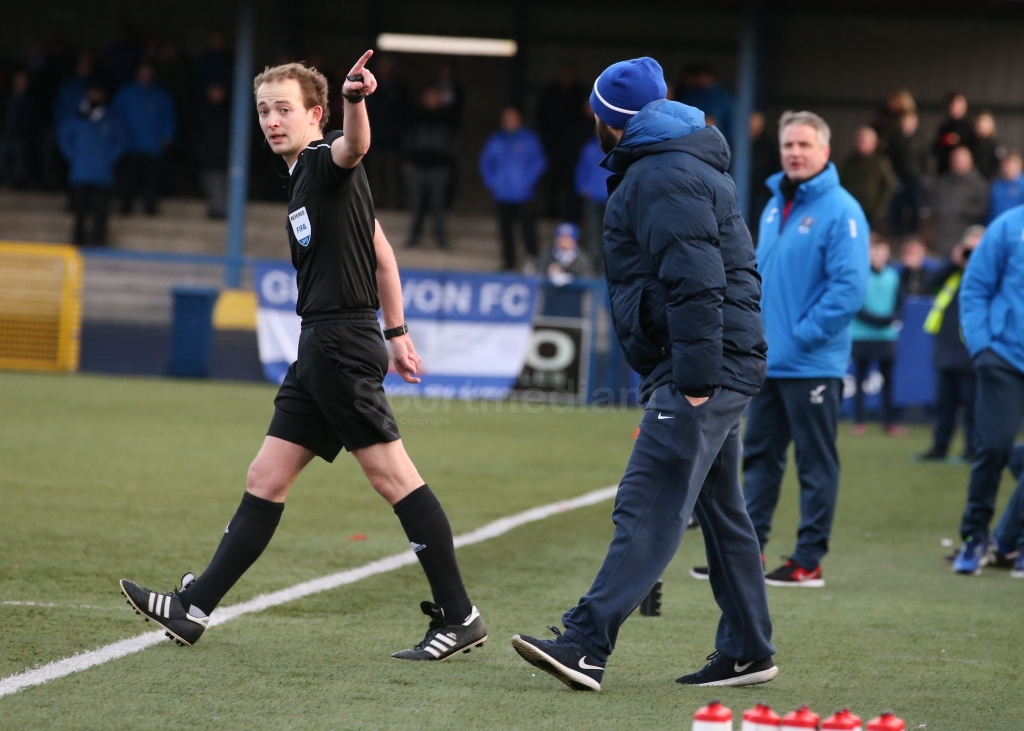 Ards defender Taylor blasted over the bar after the ball had fallen to him following a Jonah Mitchell corner in the 36th minute.

Mitchell was involved again a minute later when he ran onto a flick from Michael McLellan and went down under the challenge of Doyle close to the edge of the Glenavon penalty area. Kennedy adjudged the tackle to have been a foul and sent Doyle off for a second bookable offence. 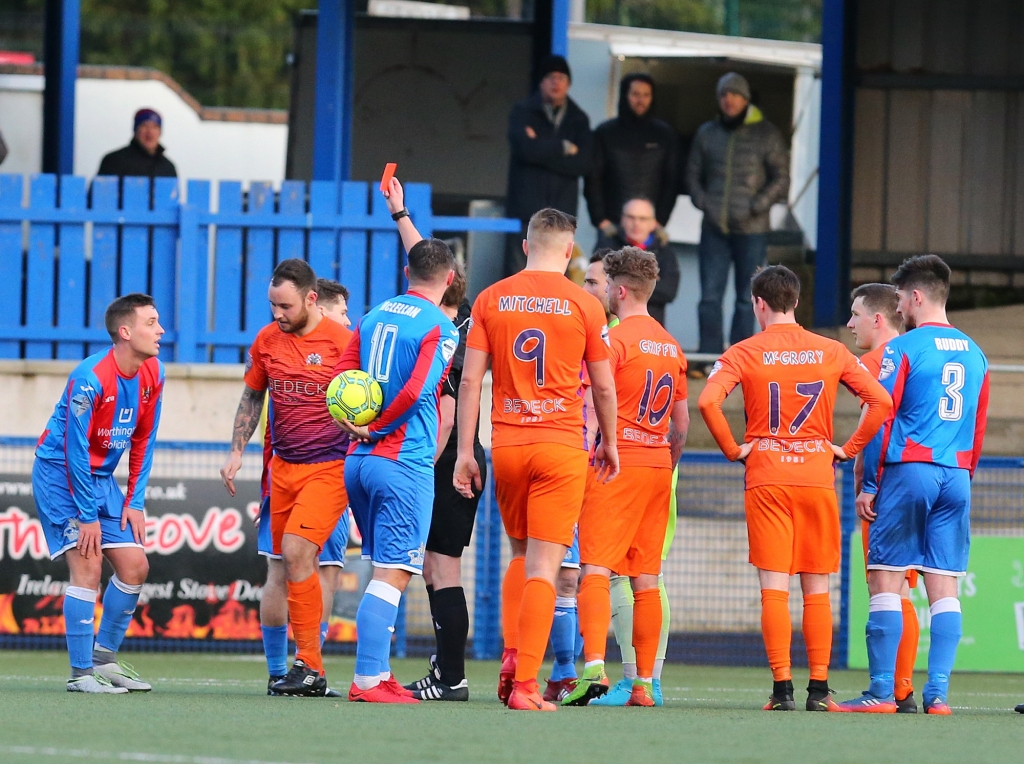 Following Doyle’s dismissal, Glenavon had to shuffle their pack, with Rhys Marshall moving inside to centre-half to cover for Doyle, winger Andy McGrory dropping back to right-back and striker Marc Griffin moving out to the right wing.

Being a man down for the entirety of the second period, the Lurgan Blues lacked a cutting edge for much of the remainder of the game, and they struggled to create clear-cut chances, while Ards rarely looked like scoring either.

James Singleton got on the end of a Bobby Burns free-kick early in the second half, but his header was comfortably saved by Hogg, then five minutes later Kyle Cherry flashed an effort just wide of Tuffey’s right-hand post, but the keeper had it covered.

Foley came on for Griffin on the hour mark, and it was the substitute who would finally break the deadlock on 79 minutes. However, it was Sykes who was the architect of the opening goal. 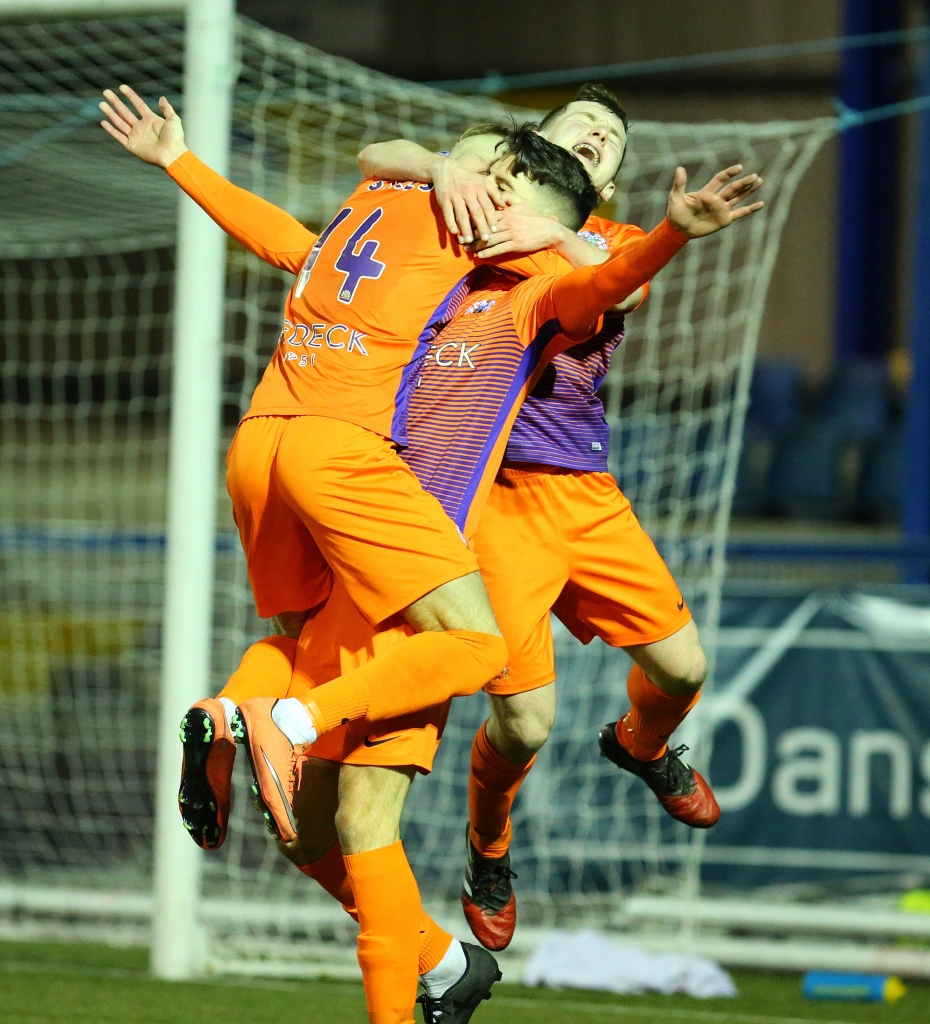 Ards left-back Michael Ruddy rose to head a McGrory throw-in, but he could only glance it back towards his own goal. It looked as though former Glenavon defender David Elebert was going to comfortably clear the ball, but he was caught unawares by the pace of Sykes, as the midfielder nipped in to take the ball off his toe. Sykes charged to the by-line and delivered an inch-perfect low cross for Foley at the back post. The winger had the simple task of slotting the ball home from inside the six-yard box to grab his second goal in as many games. 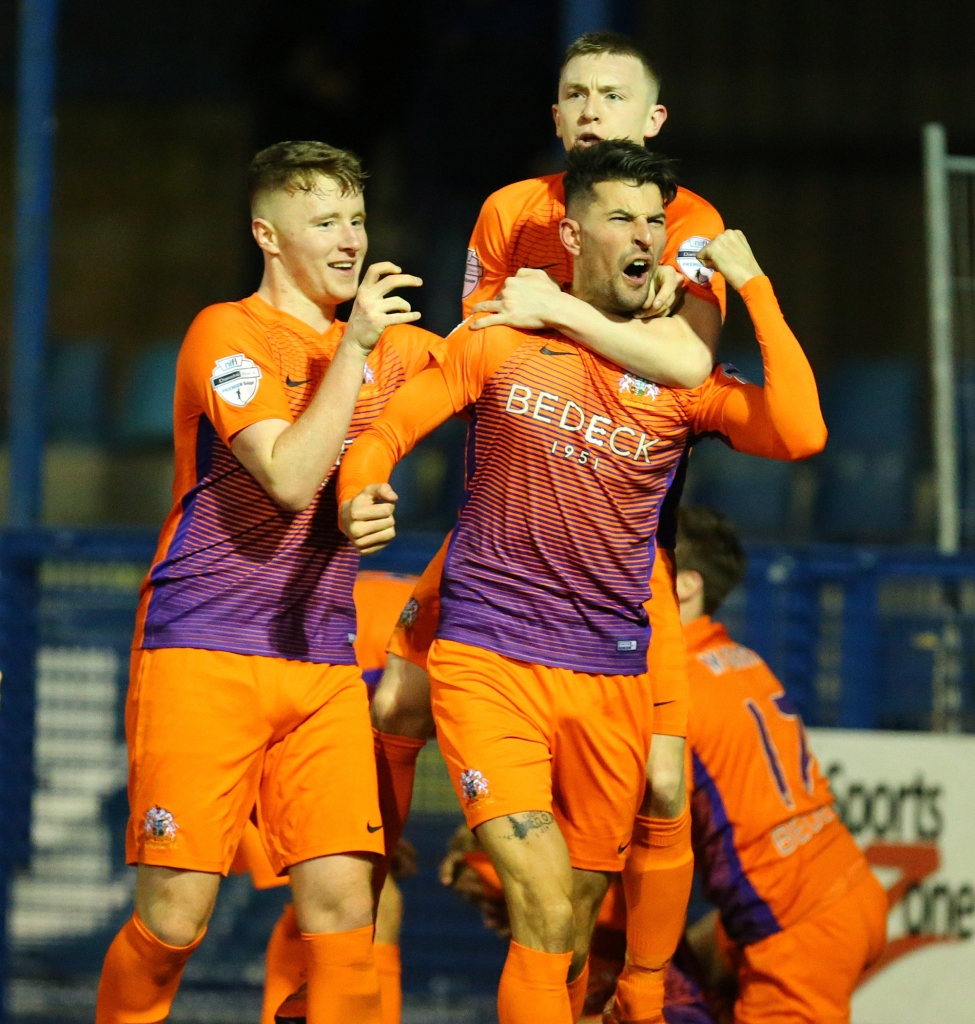 Three minutes later the home side were also reduced to 10 men when Taylor was shown a second yellow card for shoving Foley in the back off the ball, and a minute after that Sykes wrapped up the three points for the visitors with an excellent solo goal.

He ran onto a loose ball in midfield, drove directly at the heart of the Ards defence and breezed beyond Elebert and Ruddy before slotting the ball past Hogg and into the far corner to net his sixth league goal of the season.

Speaking about Sykes on BBC Radio Ulster after the game, Hamilton said he struggles to understand how his young charge has not secured a move across the water yet, and on the evidence of yesterday’s performance it was easy to see why the Glenavon manager holds such an opinion.

In truth, Sykes had been quiet for much of the match by the very high standards he has set for himself this season, but he proved late on that he is one of the few players in Irish League football who possesses the ability to turn a game on its head in the blink of an eye.

It’s as you were at the top of the Danske Bank Premiership table, with the top five teams all winning yesterday. Glenavon remain in third place, level on points with second-placed Crusaders, and six points behind leaders Coleraine, with a game in hand.

The Lurgan Blues face a tough test next Saturday (December 9th) when they travel to Solitude to take on a fourth-placed Cliftonville side who sit just two points behind them in the standings. Since a 3 – 1 defeat to Glenavon at Mourneview Park back in mid-September, Cliftonville have won all but one of their subsequent 11 league fixtures; their sole defeat coming at the hands of leaders Coleraine.

However, Glenavon are in fine form themselves, especially away from home. Yesterday’s victory over Ards was their fifth league win in a row on the road, so next weekend’s clash at Solitude promises to be a cracker.