The Irish Premiership’s top two played out a pulsating 2 – 2 draw at Mourneview Park on Saturday, as ten-man Glenavon twice came from behind to secure a well-deserved point against league leaders Coleraine.

Kick-off was delayed for 15 minutes as dozens of supporters were still streaming into the ground at three o’clock. When the game eventually did get underway it was a nightmare start for the Lurgan Blues, as they fell behind to a Jamie McGonigle goal and had James Singleton sent off inside the opening quarter of an hour. However, Mark Sykes hit back for the home side on 26 minutes to make it 1 – 1.

Glenavon were punished for a sluggish start to the second half, going behind again, this time to a Josh Carson strike. But Sammy Clingan scored his second penalty in as many games to ensure that the home side shared the spoils, after Coleraine goalkeeper Chris Johns was adjudged to have fouled Andrew Hall.

Glenavon looked nervy in the opening exchanges, and it was no real surprise when they fell behind as early as the eighth minute, albeit under somewhat controversial circumstances. Hall’s headed clearance was met by Coleraine left-back Aaron Traynor, who in turn headed the ball back towards Glenavon’s penalty area just as the linesman was raising his flag to signal that Bobby Burns had strayed into an offside position. However, as the Glenavon players stopped, anticipating the awarding of a free-kick for the offside, referee Raymond Crangle played the advantage and allowed play to continue. McGonigle took full advantage, racing clear of the hesitant Glenavon defence and expertly curling his shot beyond Jonathan Tuffey and into the far corner to open the scoring.

Things went from bad to worse for Glenavon on fifteen minutes when left-back James Singleton was given his marching orders for pulling down Ian Parkhill as the winger was bearing down on Tuffey’s goal. Parkhill outpaced Singleton and latched onto Carson’s through ball after Rhys Marshall had been dispossessed close to the halfway line. With Parkhill clean through, referee Crangle felt he had no choice but to flash a red card at Singleton once he decided a foul had been committed. From the resulting free-kick, centre-back David Ogilby’s low shot forced Tuffey to dive to his right to make a save and keep the deficit at just one goal.

Ironically, Glenavon seemed to spring into life after being reduced to 10 men, and they got themselves on level terms in the 27th minute. Sykes headed on a Tuffey goal-kick to Andrew Mitchell, and the striker flicked it out to Hall. When Sykes raced forward, Hall played it into his path, and the midfielder burst between full-backs Traynor and Adam Mullan and into the Coleraine penalty area before hitting a low left-foot shot which Johns couldn’t keep out despite getting a hand to it. 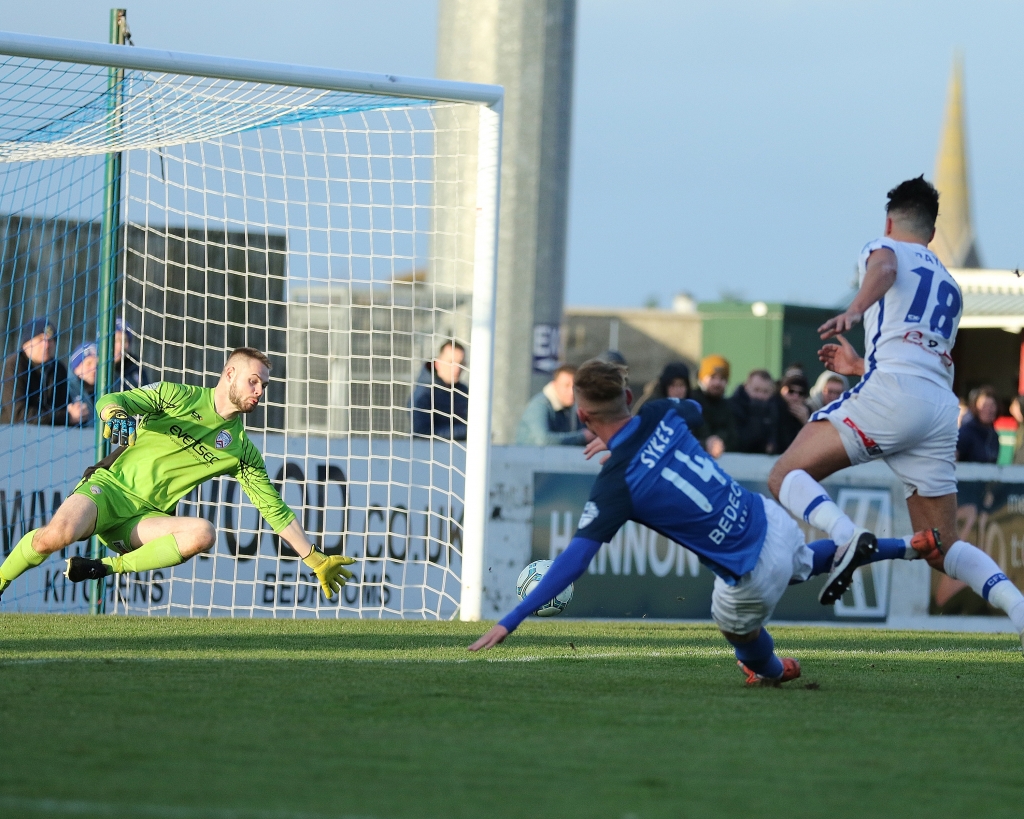 Both teams had opportunities to go in front before half-time. Hall went close with a free-kick for Glenavon on 34 minutes, while two minutes later man of the match Andrew Doyle made an important tackle to deny Joe McCready a clean strike when the Coleraine forward was well positioned. Tuffey also made a fine save to deny Parkhill in first-half injury time, after the winger had stepped inside and got a shot away with his left foot.

After doing so well to get back into the game, Glenavon looked lethargic at the start of the second period, and they were made to pay when Carson fired the visitors in front for a second time in the 54th minute. Ciaron Harkin played the ball into his midfield partner on the edge of the Glenavon penalty area. Carson came inside Clingan, then drilled a low right-foot shot beyond the dive of Tuffey to make it 2 – 1 to the Bannsiders. 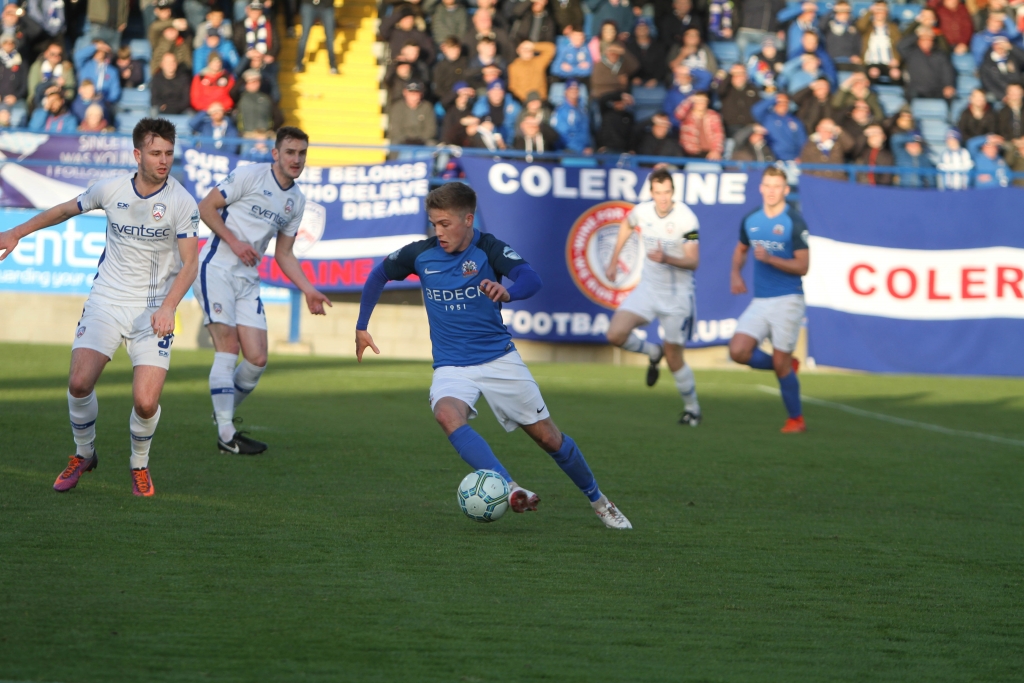 It was clear that Glenavon were determined not to leave empty handed, though, and they fought their way back into the game once more. There were suggestions of a push on Mitchell by Coleraine defender Stephen O’Donnell on 56 minutes as the striker tried to get on the end of a ball over the top, but Crangle was unmoved. Five minutes later Mitchell turned smartly and got a shot in from the edge of the box after the ball had been played into him by Doyle, but it was a comfortable save for Johns.

Hall also headed wide from a Burns cross, while a dangerous high ball into the box from Clingan landed on the roof of the net. Coleraine threatened to kill the game off on a couple of occasions during this period as well, however. First McGonigle rose at the back post to meet a McCauley corner, but he could only head wide when he should have hit the target, then Marshall did brilliantly to get back and deny McCauley when the winger cut in from the left flank.

Glenavon’s persistence paid off when they were awarded a penalty on 78 minutes. Hall chased down Sykes’s high through ball and got his head to the ball just in front of the onrushing Johns, who clattered into the winger as he attempted to punch clear. Referee Crangle pointed to the spot and Clingan stepped up to take the penalty. He was coolness personified, side-footing his spot-kick into the right-hand corner to draw Glenavon level for the second time.

Both teams had half-chances in the closing 10 minutes, but neither side could find a winner, and the game finished 2 – 2.

When they reflect on it, this is a result that neither Gary Hamilton nor Oran Kearney will be particularly disappointed with. Despite going a goal down and a man down so early in the game, Glenavon hung in there to secure a point which meant they lost no ground on the league leaders, while Coleraine maintained their unbeaten start to the season with a draw away to their nearest rivals.