Goals from Andy Hall and Sammy Clingan earned Glenavon a 2 – 0 victory away to Carrick Rangers on Saturday.

Hall opened the scoring in first-half injury time, getting on the end of Clingan’s free-kick and guiding the ball past Carrick goalkeeper Harry Doherty.

Clingan sealed the three points on 89 minutes from the penalty spot, after the impressive Bobby Burns had been upended by Mark Edgar.

This was a performance without the sort of free-flowing attacking football that Glenavon displayed in their recent victories over Crusaders and Ballymena United, but in many ways this result was just as impressive, proving that the Lurgan Blues possess the character needed to go and grind out a win when they aren’t at their best.

In truth, the blustery conditions at the Belfast Loughshore Hotel Arena meant that attractive football was always going to be at a premium on Saturday, but it was Glenavon who were on top for the vast majority of the first half.

The first real opportunity came in the 10th minute. Burns flicked Simon Kelly’s headed clearance into the path of Andrew Mitchell, but Doherty was off his line quickly to make the save. 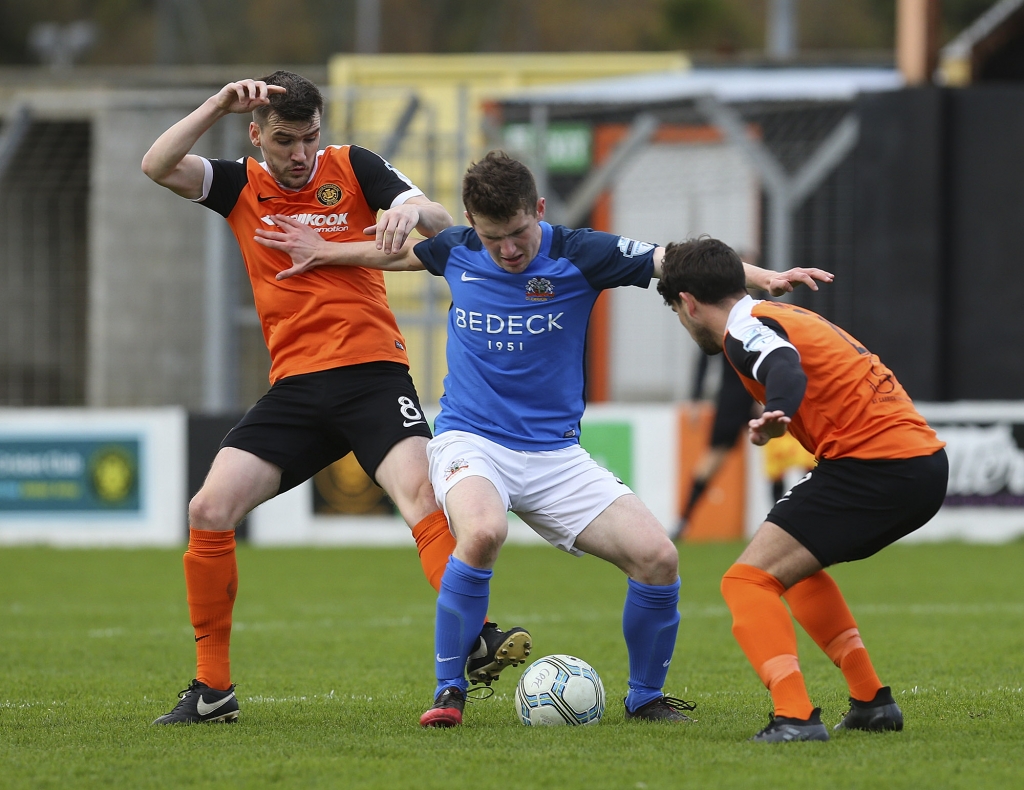 Five minutes later Clingan played a ball over the top for Mitchell to run on to. It appeared as if Carrick captain Denver Gage was pulling the striker’s shirt, but referee Steven Gregg was unmoved.

The home side then threatened on 27 minutes, hitting Glenavon on the break. Lee Chapman carried the ball across the halfway line, before slipping it into the penalty area for Martin Maybin. Maybin’s shot was well struck but goalkeeper Jonathan Tuffey was equal to it.

Burns came agonisingly close to opening the scoring just a minute later. He latched on to a loose ball on the edge of the penalty area and got a shot away with his left foot which struck the base of the post, with Doherty well beaten. 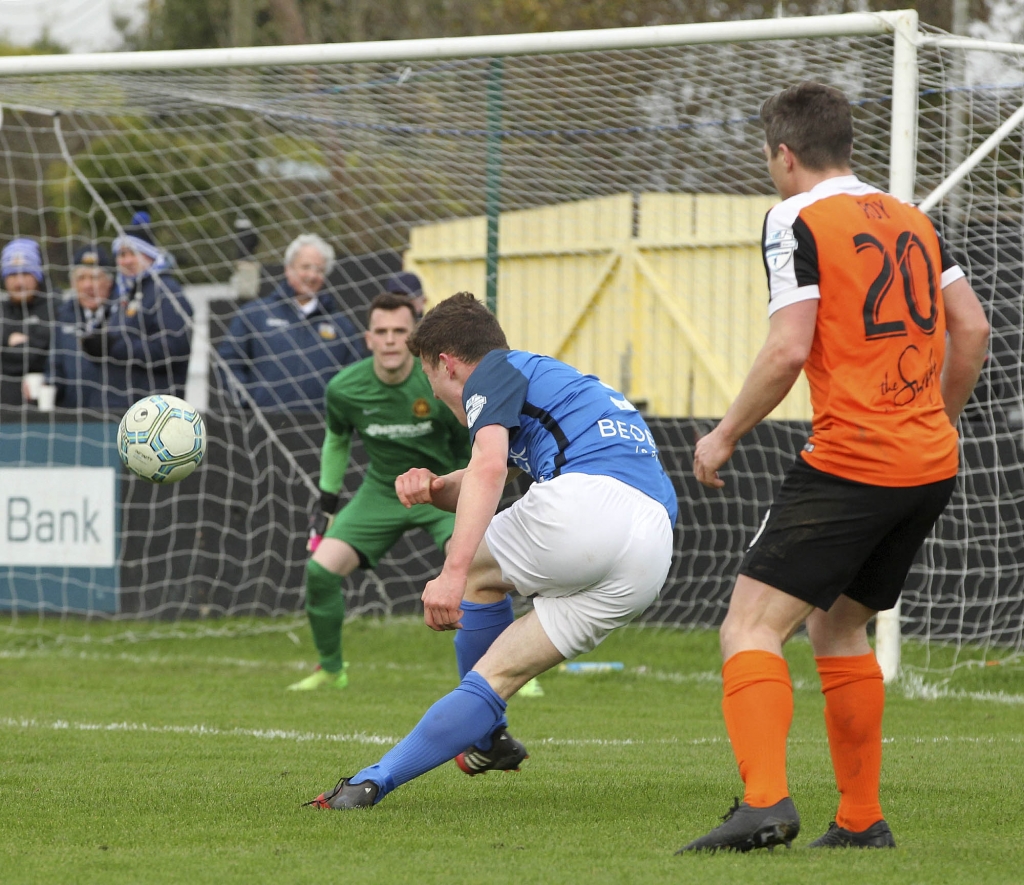 In the 42nd minute Glenavon had a bit of a let-off when Tuffey was almost robbed of the ball by Ben Roy, while the Lurgan Blues then had a penalty appeal for handball turned down two minutes later.

The deadlock was finally broken in injury time at the end of the first half. Clingan’s long free-kick picked out Hall and the winger managed to squeeze his first-time shot on the volley past Doherty from a tight angle.

Glenavon had a second penalty appeal turned down early in the second half when Mitchell went down in the area. Maybin robbed Doyle close to the corner flag minutes later and pulled the ball back for Eamonn McCallister, but Sammy Clingan got back to block the shot.

As the second half wore on Glenavon were increasingly dominant, but Doherty was in fine form in the Carrick goal, denying the visitors on a number of occasions. He made a smart save in the 69th minute. Mitchell drove past Chapman to the bye-line and drilled a low cross into the six-yard box. Doherty got down to get a strong left hand to the ball before pouncing on it to snuff out the danger when Mark Sykes was lurking. 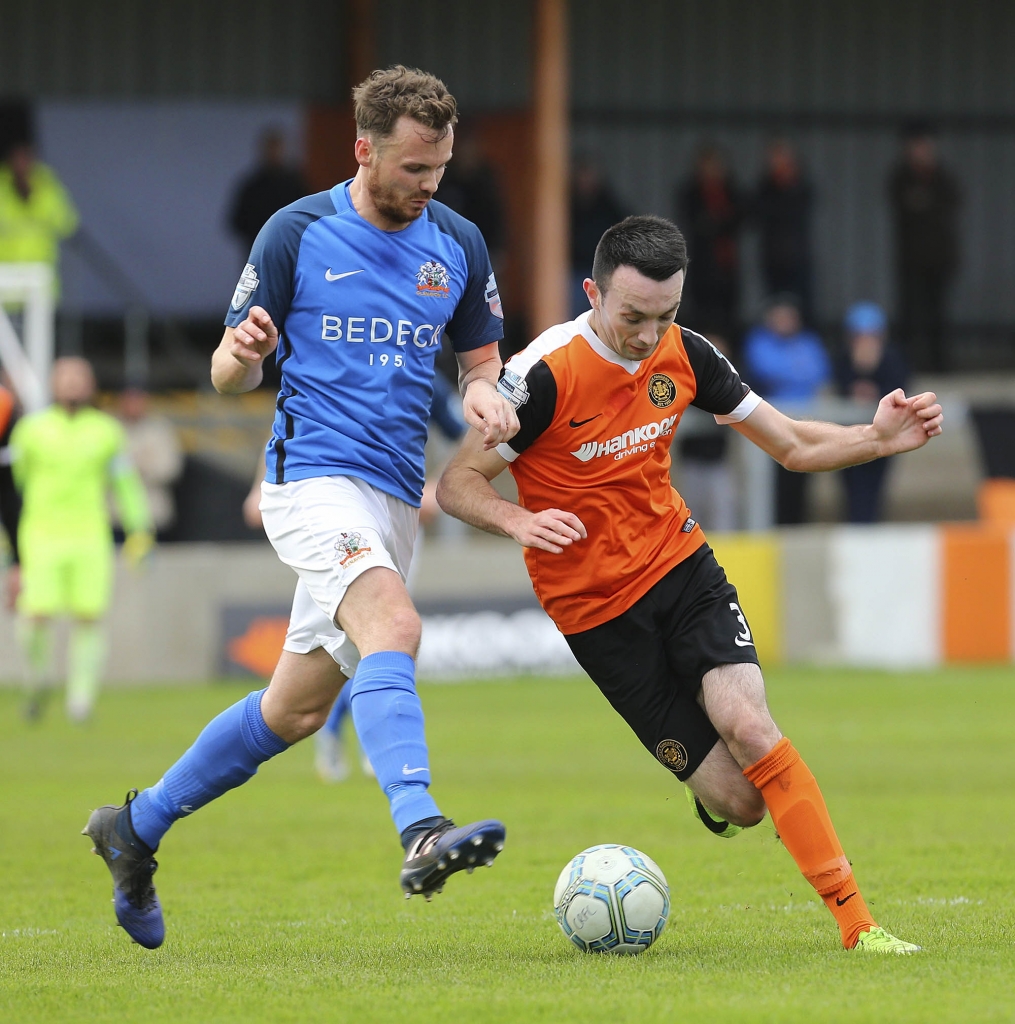 Doherty thwarted Glenavon again in the 75th minute. Marshall’s throw-in found Burns and the 18-year-old turned inside before firing in a shot from 20 yards out, but Doherty dived to his right and palmed the ball behind for a corner. Soon after he denied Mitchell from point blank range after the striker had turned Gage and got a shot in from an acute angle. 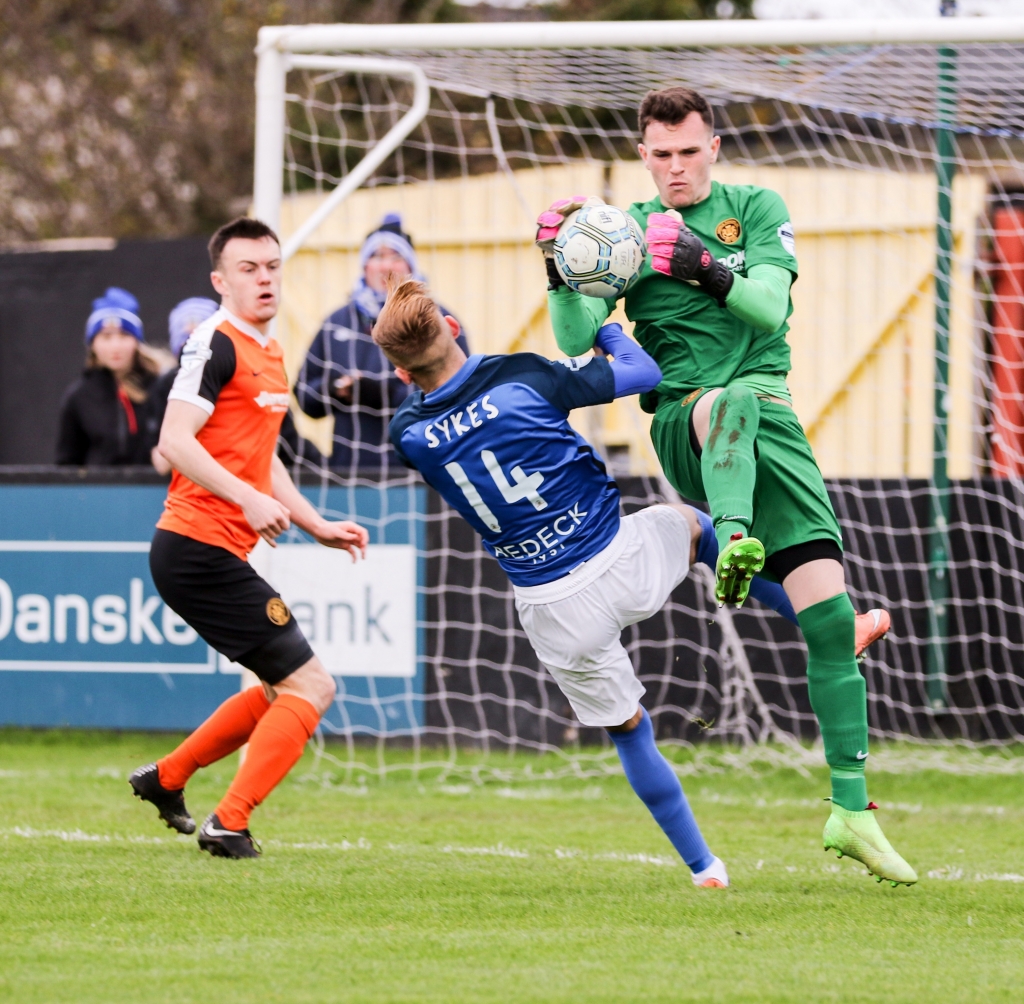 Perhaps Doherty’s best save came in the 85th minute, when Hall tried to catch him out by bending a low shot around the wall from a free-kick. The goalkeeper got down to his left to make the stop.

When Doherty was finally beaten for a second time it came from the penalty spot. Burns flicked James Singleton’s throw-in on to Mitchell, then as he was attempting to get on to Mitchell’s lay-off he nipped in just in front of Edgar, whose rash tackle gave referee Gregg no choice but to point to the spot. Sammy Clingan stepped up and sent Doherty the wrong way as he slotted in the penalty and sealed another three points for Glenavon. 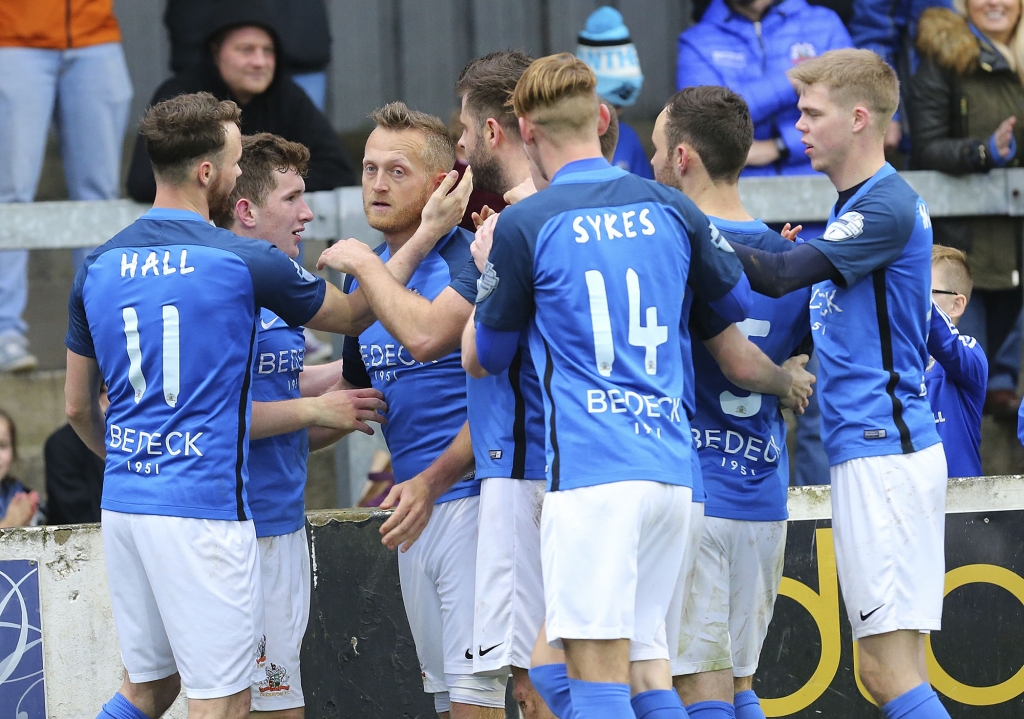 Next up for Glenavon is a massive top-of-the-table clash with Coleraine at Mourneview Park on Saturday November 4th. As it stands, the Lurgan Blues are five points behind the Bannsiders. However, come Saturday that gap could be eight points, as Coleraine entertain bottom club Ballinamallard United at the Showgrounds on Tuesday night in a rearranged fixture.