Glenavon bounced back from their disappointing League Cup exit at the hands of Ards in midweek to record a convincing 4-0 victory over Ballymena United at Mourneview Park on Saturday, extending their unbeaten Premiership run to six matches.

All four goals came in the first half, with striker Andrew Mitchell netting a brace to move into double figures for the season, before man of the match Bobby Burns struck a third just after the half-hour mark. Andrew Hall rounded off the scoring when he converted a free-kick from all of 35 yards. Ballymena were also reduced to 10 men before half-time; referee Arnold Hunter showing defender Kyle Owens a straight red card for a lunge on Burns.

It had been a week of extremes for Glenavon leading up to this encounter with Ballymena. Manager Gary Hamilton described the 3-2 victory over Crusaders at Seaview as the Lurgan Blues’ finest performance in his five and a half years in charge, but he also suggested that the 4-0 defeat away to Ards was perhaps the worst of his tenure to date.

Hamilton will have been delighted that Saturday’s showing bore a much stronger resemblance to the performance against Crusaders than the one against Ards, as Glenavon blew Ballymena away in the first 45 minutes.

After a scrappy opening few minutes to the game, the first chance fell to Mark Sykes when Hall picked him out at the far post with a left-foot cross, but the midfielder’s first touch let him down, allowing Ballymena goalkeeper Conor Brennan to gather.

The home side weren’t to rue that missed opportunity, however, as Mitchell struck just two minutes later to open the scoring. Ballymena defender Michael Gault could only glance James Singleton’s long throw-in into the path of Mitchell, who raced into the penalty area and got a shot away from a tight angle. The ball somehow squirmed underneath Brennan and crossed the line.

Most of the Mourneview Park crowd thought Glenavon had doubled their lead in the 20th minute. Rhys Marshall’s throw-in was flicked on by the head of Hall and found the feet of Burns. He played it inside to Sykes, who in turn slipped it to Josh Daniels inside the penalty area. The winger’s left-footed shot was well struck, but it went just the wrong side of the post, brushing the side netting.

The second goal did arrive four minutes later. There may have been an element of luck involved in Mitchell’s first strike, but his second demonstrated his class in front of goal. He brought a long free-kick from goalkeeper Jonathan Tuffey under control, then turned inside Owens. With the ball bouncing in front of him, Mitchell struck a sweet shot on the half volley with his left foot which flew into the bottom corner, past the despairing dive of Brennan, for his 10th league goal of the season. 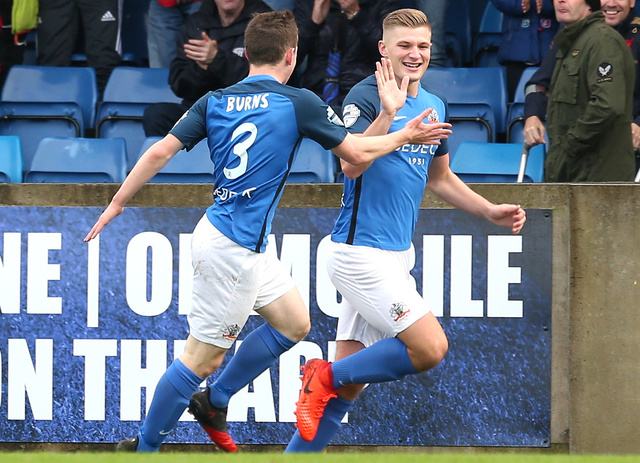 Half an hour in, the visitors very nearly fashioned a couple of chances for themselves in quick succession. Andrew Burns’s throw-in found its way back to him and he whipped over a cross from the right which almost picked out the head of Owens. Former Glenavon man Kevin Braniff retrieved the ball on the left and sent it back into the box. It fell for Joe McKinney, but he failed to bring it under control and Andrew Doyle managed to clear the danger.

Glenavon ruthlessly extended their lead three minutes later. The outstanding Burns dispossessed Gault and carried the ball into the penalty area. It looked as if he was going to square it to Mitchell for a tap-in, but instead Burns calmly stroked the ball into the far corner himself. 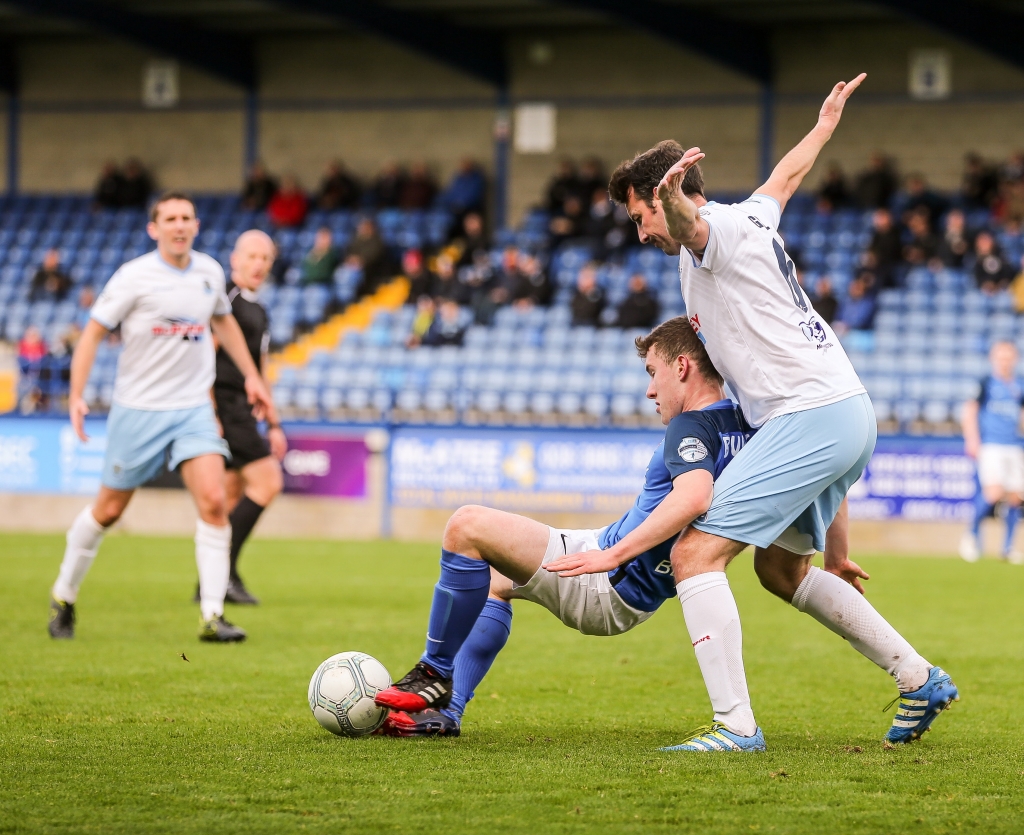 Ballymena had struggled to get to grips with Burns all afternoon, and this frustration boiled over shortly after his goal, when Owens lunged in at the 18-year-old from behind close to the halfway line and referee Hunter showed no hesitation in producing the red card. 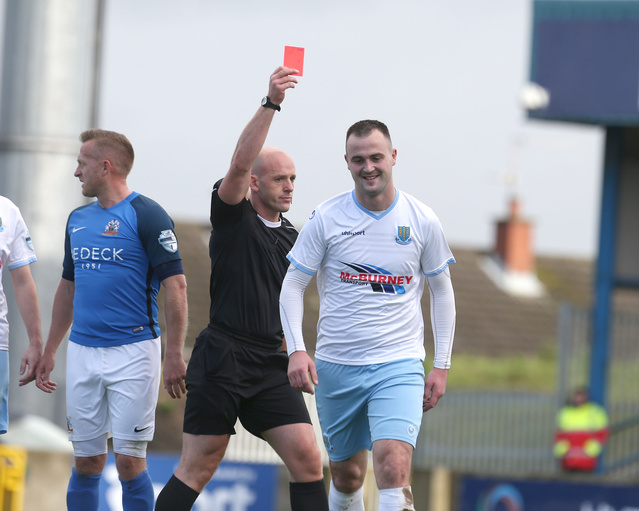 In the 42nd minute Gault was booked for a cynical foul on Mitchell 35 yards from goal. Andy Hall stepped up to strike the resulting free-kick and his wicked effort flew past Brennan, although the goalkeeper will be very disappointed not to have kept it out as it was virtually straight at him. 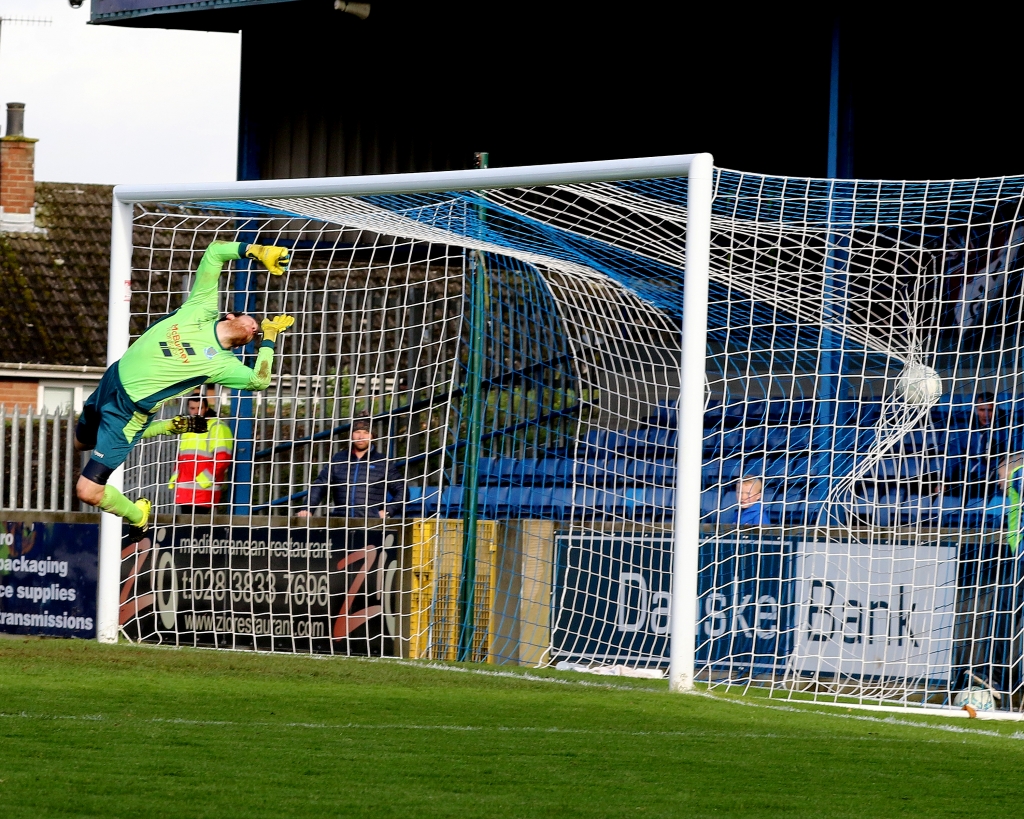 Hall’s free kick hits the back of the net. Photo by Maynard Collins.

With the scoreline 4-0 at half-time and their side a man down, not to mention the fact that they’ve been on the receiving end of a number of very heavy defeats against Glenavon in recent seasons, some Ballymena fans headed for the exit during the interval, fearing that the game might turn into another rout in the second half.

However, the intensity of Glenavon’s play dropped markedly in the second period, and they failed to add to their tally. That being said, they really should have had a fifth goal in the opening five minutes of the second half. Burns’s perfectly flighted free-kick presented Marshall with a wonderful chance on the six-yard line, but the right-back somehow failed to convert his header, directing it wide of the far post.

Despite the downturn in Glenavon’s performance level, Ballymena rarely threatened Tuffey’s goal and never looked like scoring. The one bright spark for the visitors was Cathair Friel, who showed in flashes why he is becoming a top Irish League player.

On one occasion he cleverly beat Doyle near the corner flag and pulled the ball back for McKinney, but he failed to make decent contact and his shot dribbled harmlessly wide. Later, Friel outpaced substitute Caolan Marron, and got a shot away, but Tuffey was equal to the effort. The game finished 4-0.

Glenavon will be hoping to keep the pressure on league leaders Coleraine when they travel to the Loughshore Hotel Arena to take on 10th-placed Carrick Rangers next Saturday (October 28th), but before that the Lurgan Blues are in Mid-Ulster Cup action on Tuesday night (October 24th), away to Armagh City for a quarter final tie (kick-off 7.45pm).