Glenavon Up to Third after Easing Past Ards

Glenavon moved up to third place in the Danske Bank Premiership table with a comfortable 3-0 victory over Ards at Mourneview Park on Saturday (September 23rd).

The Lurgan Blues went ahead in the 12th minute through the excellent Mark Sykes, before doubling their lead six minutes later when Ards defender Johnny Taylor headed the ball into his own net.

The visitors thought they’d got back into the game in the opening minute of the second half, but Michael McLellan’s effort was ruled out for offside in somewhat bizarre circumstances.

Glenavon responded by adding their third goal just two minutes later, as Sykes grabbed his second of the afternoon to seal the victory for the home side.

In truth the visitors started the brighter of the two sides, putting the hosts under pressure and winning a number of corners in the opening exchanges. Ironically, however, it was from one of those corners that the opening goal came, as Glenavon hit Ards on the break to devastating effect.

When Rhys Marshall cleared Nathan Hanley’s corner, the bounce deceived full-back Adam McAleenan and fell for Andrew Mitchell. The striker played the ball inside to Bobby Burns, who in turn fed it wide to Josh Daniels. Daniels waited for the right moment to play in the marauding Sykes with the outside of his right foot, and the midfielder made no mistake with his finish, controlling with his right foot and calmly slotting the ball past Aaron Hogg with his left. 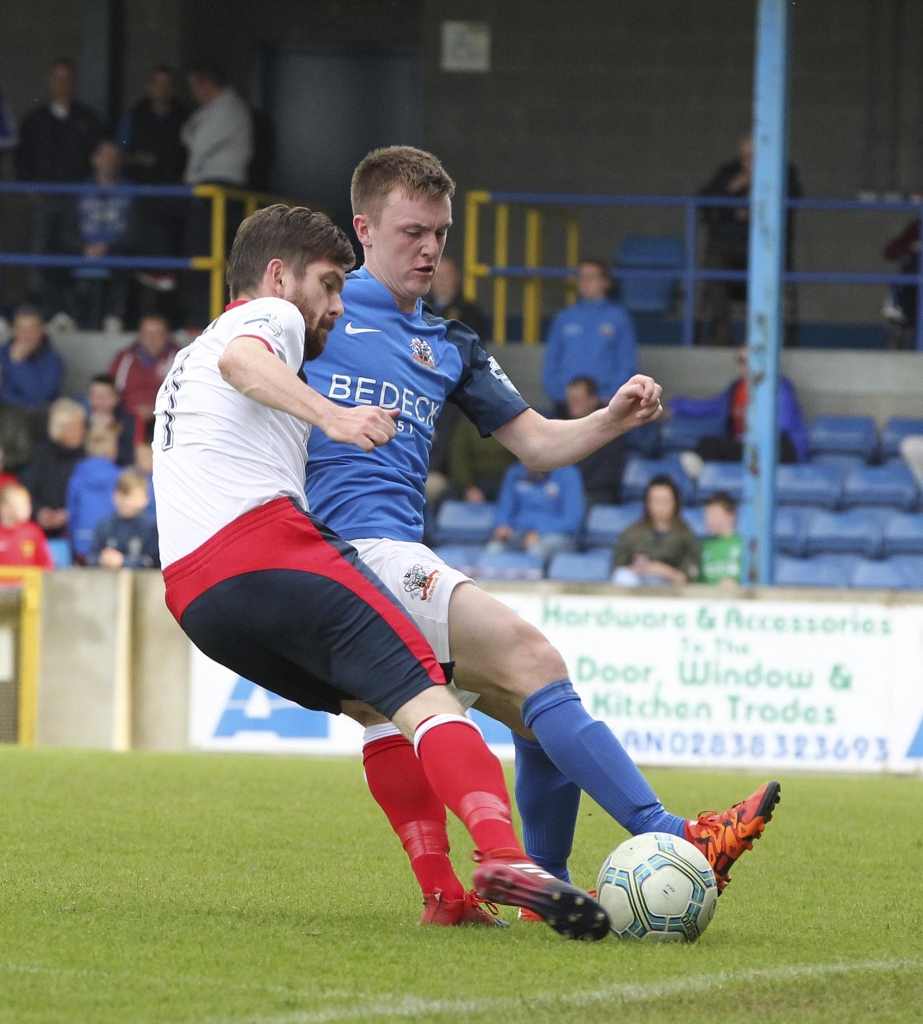 The second goal arrived in the 18th minute. James Singleton launched a long throw-in into the Ards six-yard box. Centre-half Taylor rose highest to meet the ball, but he could only manage to divert it past his own goalkeeper. 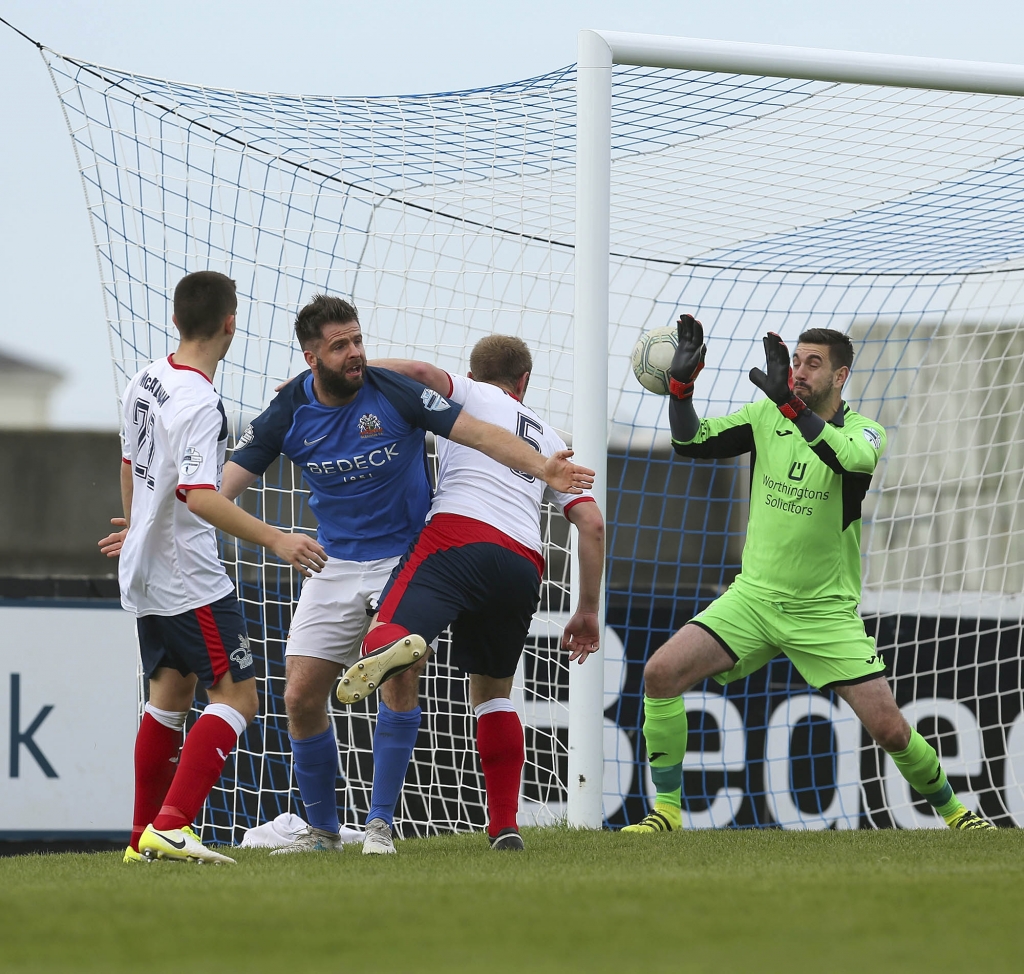 Three minutes later Taylor brought Sykes down right on the edge of the penalty area. Glenavon appealed for a spot-kick, but referee Steven Gregg awarded a free-kick instead. Sammy Clingan’s effort was blocked, and when the ball came back to him he had another shot at goal, but it was deflected behind. From the resulting corner Marshall saw his header brilliantly saved by Hogg. 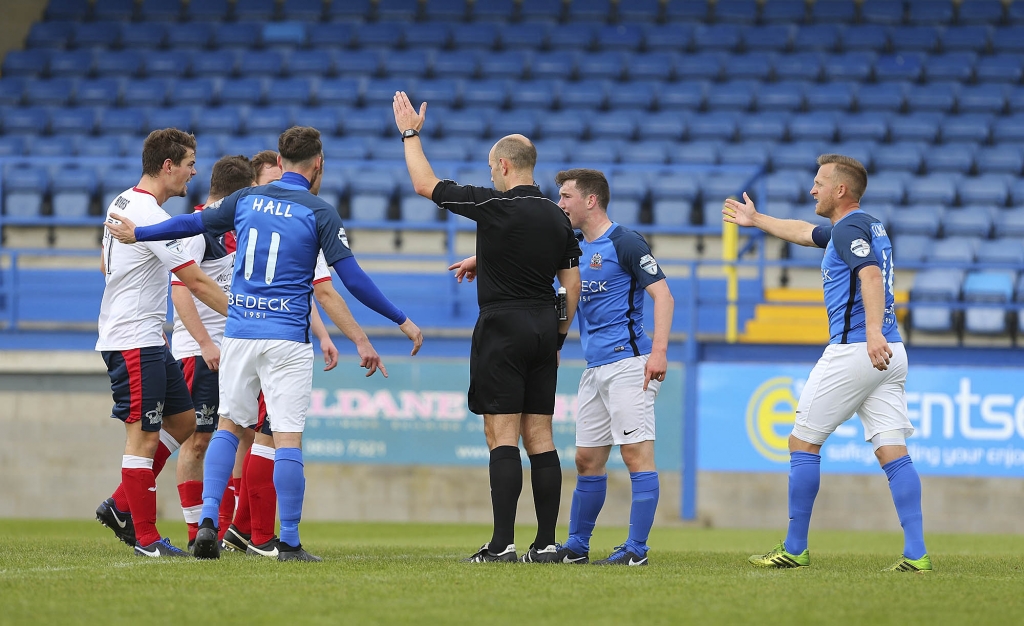 Sykes was a constant threat all afternoon, and in the 32nd minute he saw a rasping effort from distance go just over the bar. Andrew Hall then forced Hogg to tip over a free-kick from all of 35 yards, and the Ards keeper made another good save to thwart Sykes three minutes before the break.

Ards thought they had pulled a goal back in the first minute of the second period. McLellan flicked Hogg’s clearance on for David McCallister and the winger nipped past Marshall before pulling the ball back for McClellan. The former Linfield striker swept a shot past Jonathan Tuffey with his left foot, only for referee Gregg to rule the goal out for offside, after having consulted with his assistant. Presumably the decision was reached because Jonny Frazer was adjudged to have been standing in an offside position and in Tuffey’s line of sight when McLellan struck his shot.

Glenavon responded ruthlessly to the visitors’ misfortune, adding to their lead two minutes later. When Marshall’s throw-in found Burns, he looked poised to have a shot at goal from distance, only for Sykes to nip in and take the ball from him, bursting clear of the Ards back line and into the penalty area before lashing in his second and Glenavon’s third.

In all honesty, as the second half went on, the game petered out. Ards were mostly restricted to efforts from distance and never threatened to get back into the contest. At the same time, Glenavon rarely looked like adding to their lead, and the match finished 3-0.

Defender Andrew Doyle was named man of the match. Just reward not only for an assured showing on the day, but also for a string of fine performances in recent weeks. 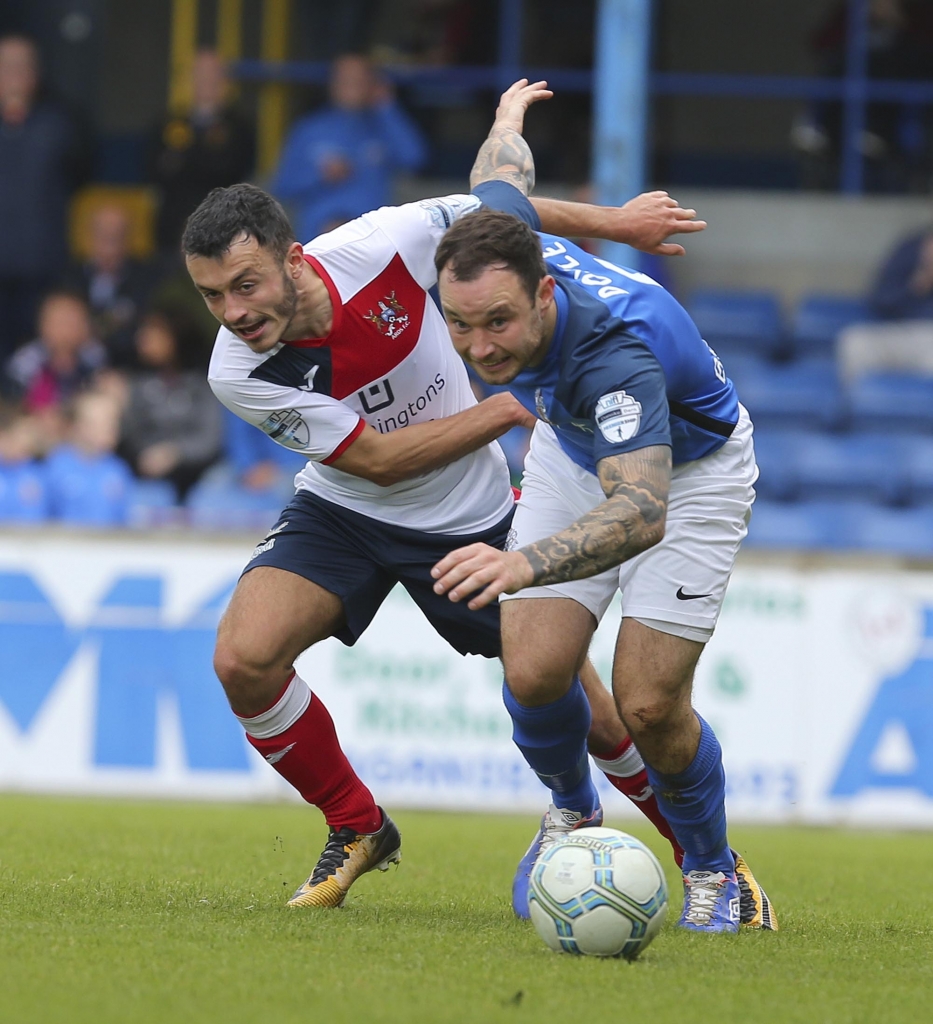 With Crusaders having to settle for a point at home for the second weekend in a row, this was a victory which saw the Lurgan Blues leapfrog the Crues and move up to third place in the league table, just three points behind pacesetters Coleraine.

Glenavon’s next match sees them host Northern Amateur Football League side Rathfriland Rangers in the first round of the Mid-Ulster Cup on Monday night (September 25th, kick-off 7.45pm), before they return to league action on Friday night (September 29th), when they welcome Dungannon Swifts to Mourneview Park (kick-off also 7.45pm).