Debutant Josh Daniels came off the bench to rescue a point for Glenavon in Friday nightâ€™s 2-2 draw with Glentoran.

Andrew Mitchell put the Lurgan Blues in front midway through the first half with his fourth goal of the season, before ex-Glenavon striker Robbie McDaid turned the game on its head late in the second half, scoring two goals in the space of five minutes after coming on as a substitute. 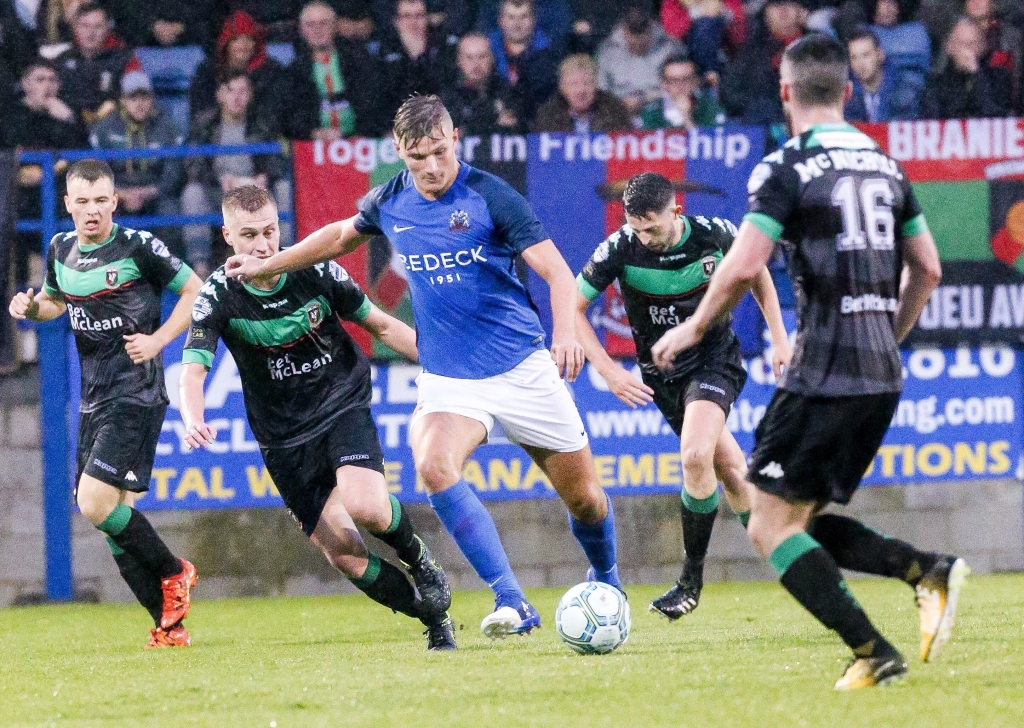 However, Daniels ensured that the Lurgan Blues didn’t leave empty handed when he notched the equaliser in the 87th minute following a goalmouth scramble.

It was the least the Mourneview men deserved, and they surely would have secured all three points had it not been for an inspired performance from Glentoran goalkeeper Elliott Morris.

Morris was first called in to action in the 13th minute. Adam Foley’s low cross found Bobby Burns and he teed up strike partner Mitchell, but Morris was equal to the striker’s left-foot volley, making an excellent save to tip the ball over the top.

Morris thwarted Mitchell again seven minutes later. Mark Sykes spread the ball wide to Andrew Hall on the right flank and his low cross found Mitchell on the edge of the six yard box. Despite mis-hitting his effort, Mitchell’s shot was still destined for the top corner and it required another smart save from Morris, who sprang up to push the ball over the bar with his left hand.

The Glentoran keeper was finally beaten by Mitchell in the 23rd minute. Rhys Marshall drove infield, battling his way through the challenges of Kym Nelson and Dylan Davidson, before playing the ball into Mitchell’s feet. With his back to goal, the striker turned smartly and fired a low shot into the far corner from 20 yards out, beyond the dive of Morris. 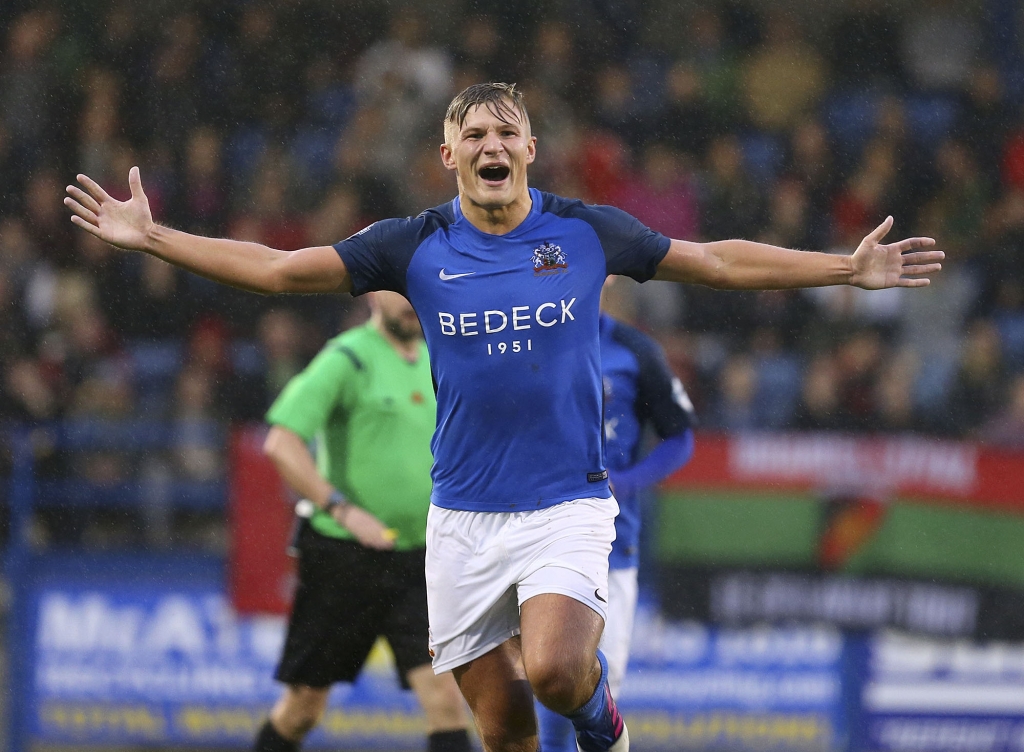 Sykes was unlucky not to double Glenavon’s lead half an hour in when his rasping effort from distance whistled just past the post, whilst Nelson blasted a free-kick over for Glentoran.

Just before the break Burns saw his overhead kick go narrowly wide for the hosts, and in the last action of the first half Sammy Clingan’s powerful long drive was pushed out by Morris, with Hall flashing the follow-up over the bar. 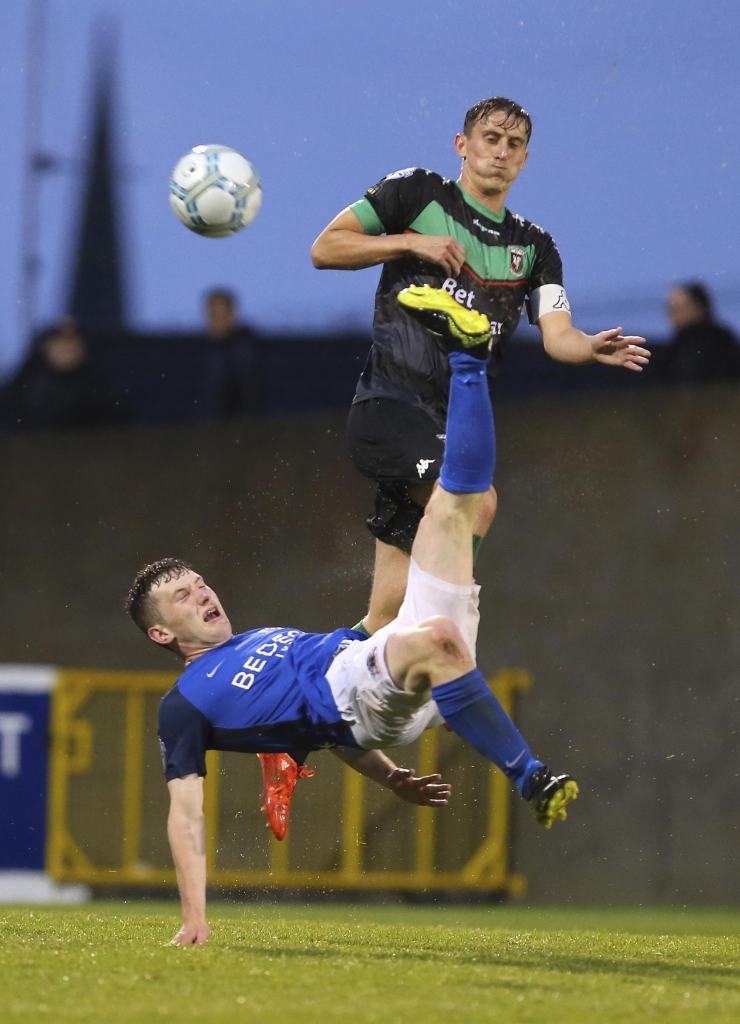 Early in the second half Morris had to tip a Burns free-kick round the post, before his Glenavon counterpart Jonny Tuffey was grateful to see a deflected shot from John McGuigan fall kindly into his arms.

Foley was very unfortunate not to add a second for Glenavon on 66 minutes. He latched on to a loose ball and cut inside, exchanging a neat one-two with Burns, but his right-footed effort struck the base of the post.

Glenavon had appeals for a penalty turned down in the 72nd minute when Calum Birney’s robust challenge on Burns left the 17-year-old on the ground clutching his face.

Less than 10 minutes later the Glens were level. Curtis Allen, who was well marshalled by the Glenavon defence for most of the game, dribbled in from the left, holding off challenges from Marshall and McGrory, before bundling his way through Andrew Doyle’s tackle and playing a pass in to McGuigan. The number 10’s return ball was intended for Allen but it fell instead to McDaid and the former Leeds United player calmly stroked his shot inside the far post.

Glentoran then went in front on 85 minutes. Captain Marcus Kane’s long ball over the top found McDaid and the young striker expertly guided his first-time shot past Tuffey to score his second of the night and make it 2-1 to the visiting side.

But Glenavon were not to be denied. McGrory laid the ball off for Marshall, whose cross was met by the head of Sykes. Morris made another fine save to keep the midfielder’s effort out, then reacted quickly to save Daniels’ follow-up header. Both Burns and Mitchell saw their efforts blocked, before the ball eventually came to Daniels again and the 21-year-old former Derry City winger drove his low shot through the crowd of bodies and into the net to level matters. 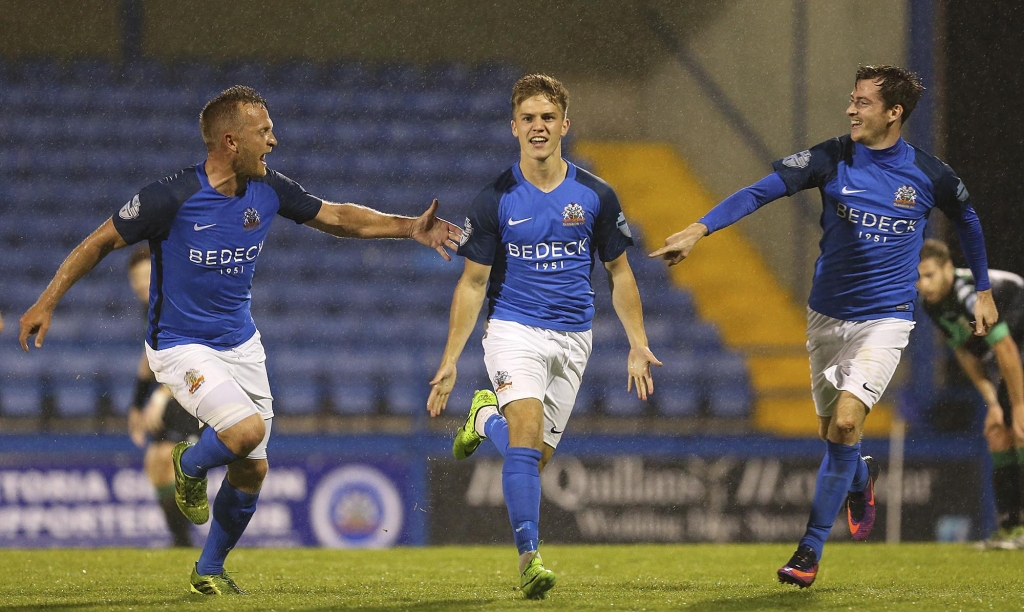 Glenavon had opportunities to snatch victory in stoppage time. First Daniels was denied by another smart Morris save when his header from a Burns free-kick was tipped over. Then the winger saw his deflected shot drift agonisingly over the bar. From the resultant corner Simon Kelly couldn’t keep his header down, meaning the game finished 2-2.

Next up in the league for Glenavon, after next Tuesday night’s League Cup tie with Donegal Celtic,  is a trip to the Coleraine Showgrounds (Saturday September 2nd) for a top-of-the-table clash with a Coleraine side who have won all four of their opening fixtures in this season’s Danske Bank Premiership.