As supporters will already be aware Paul Millar has decided to step down from his post as First Team Assistant Manager to take up a new role at Glentoran FC. Paul joined Glenavon in the last few weeks of the 2011/12 season having previously been manager of Glentoran, Newry Town and Larne. 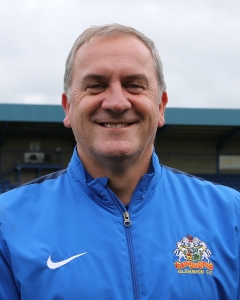 Speaking exclusively to glenavonfc.com today Gary Hamilton paid this tribute to Paul. “Paul is someone I have a lot of respect for. It was actually Paul who signed me for Glentoran when he was manager at the Oval and in fact I did my A Licence coaching qualification with him. When I came to Glenavon as a young and inexperienced manager his advice, support and guidance were invaluable for me. He was someone you could trust; someone you could bounce ideas off and with his infectious personality he was excellent in the dressing room. He leaves having had 7 good years at the club and with the other coaches has played a major part in helping us move forward.”

Gary went on to explain,  “I was aware that Paul had been involved for a year with the consortium now planning to take control at the Oval. Clearly the chance to move back to Glentoran is one that excites him and also gives him the potential to perhaps ‘move upstairs’ and take on a new role in the future.” Gary also explained that given the long standing friendship that existed between Paul and the new Oval manager, Mick McDermott – they had also been on the same coaching course – he was not surprised that Paul had decided to leave when Mick was appointed at the weekend.

Gary concluded by saying  “People at all levels within football move on. We have to accept that. What is important is to remember what Paul did for this club during the time he was here”

Chairman Adrian Teer commented “ Gary has summed up Paul Millar’s contribution to Glenavon very well indeed. Paul has moved on hoping to better himself within the game and no-one can or should fault him for having that natural aspiration. On behalf of the Board I would sincerely thank him for his highly significant and much valued contribution to the Glenavon cause since 2012 and wish him well in his future career within the game”.