Caolan Marron has given Gary Hamilton a boost ahead of tomorrow’s huge opening league game against Linfield at Mourneview Park by signing a new deal that will see him remain with the club for the next three seasons. The young centre-half has become a key player in the Lurgan Blues defence and the manager is delighted to have sealed the deal after training last night. Caolan Marron with a clearing header. Photo by Maynard Collins

Glenavon’s third place finish last season may have surprised a few observers and Gary conceded that, before the season kicked off, he and his coaching staff weren’t really expecting to finish there. “But, when the season got going and we saw Bobby (Burns), how vital he was in terms of being able to play so many positions, Sammy Clingan coming in and was excellent, Mitch came in and hit the 20 goals and other players stepped up to the mark so we had a lot of good performances and set high standards last season. Before the season started we were down a few players and we needed to bring in a few extra players and until you get them in and see how they go you don’t know, and we were wary if Sammy was going to break down, was Bobby too young – so no-one knew what to expect but as the season got going I think we all realized pretty quickly how good it looked and how good the boys were looking and that gave us hope. It was a great season all round.” 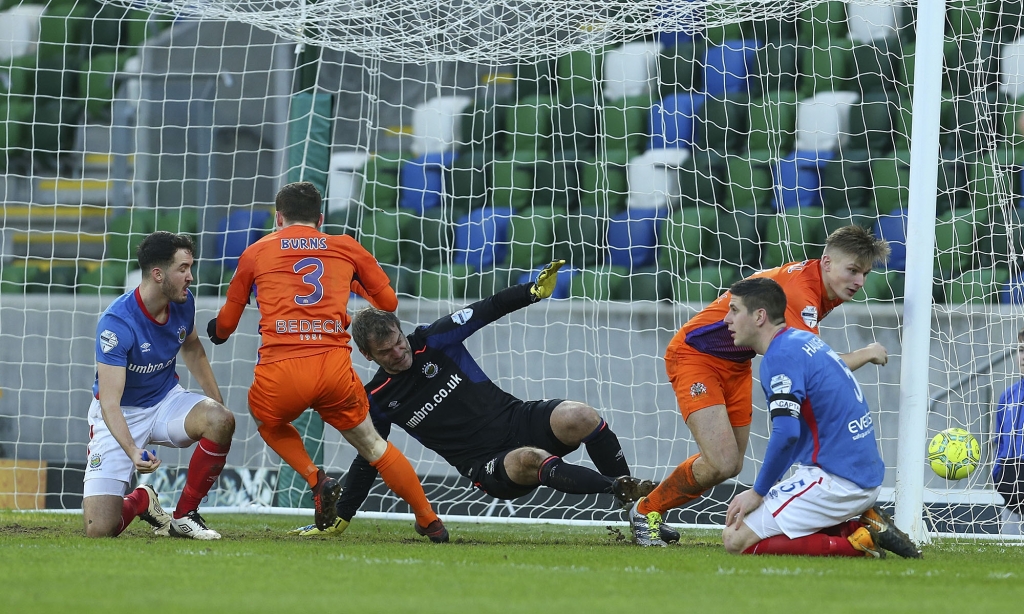 “We lost five in the Summer with Bobby going to Hearts where he’s doing really well; Joel Cooper was a starting 11 player, Simon Kelly was a starting 11 player, Andy McGrory who’s been an unbelievable servant to the club over the last six years or so. Up to date, the players who we’ve brought in have proved that they’re every bit as good and the quality is every bit as good in the squad. The proof will be in the pudding when we get the season underway, we see how the results start going and where we are come Christmas time but based on pre-season and what we’ve seen, there’s no reason why they can’t have another season like last year and, you never know, maybe even better it. It’s going to be a tough ask. We’ve never broken the 70 points barrier at the Club and last year we got as close to it with 69 points so if we are to better last season we’ll have to achieve the highest ever points that the Club’s had.

“It’s a tough ask but it’s a challenge for the boys and it’s one we’ve set them and we also want to improve the home form because it wasn’t good enough last season. There can be a number of reasons for that. As I said last year, I think, sometimes at home, the supporters aren’t as vocal and as encouraging to the team as they are away from home. We don’t hear the same amount of singing and encouragement as you do away from home and we’ve noticed that. I think that plays a part but we can’t just blame that; the boys have to be mentally stronger, if that is the case that supporters are more critical at home because it’s the same for every team and the boys have to accept that and learn to deal with that. Last year was difficult for them because they were a really young squad and they’re young this year again and it’s harder for younger players to deal with that. For experienced players it’s like water off a duck’s back but I’d like to make a plea to the fans, especially at home, to be more supportive of us, get behind us more and see if that does change things and does help us because we have to do it together as a club, and not just the players on the pitch but the supporters as well.”

The game is not all-ticket so do come along, pay at the turnstile (£11 and £7 concession) and enjoy what promises to be a great atmosphere and some real football 🙂

The match is sponsored by John Muldrew Family Butchers of Markethill, the ball is sponsored by Barry Craig and the Glenavon Man of the Match award is sponsored by Charlie Cardwell. Many thanks to all our sponsors – your support is a vital part of our success.

If you’d like to sponsor a match, the match ball or the MOM award check out our matchday sponsorship page to see what’s available and give Eddie Drury a call on 07866 273 306.