Three and Easy as Glenavon Progress

Glenavon marked the second anniversary of Mark Farren’s death with a convincing 3 – 0 victory over Dungannon Swifts in their Irish Cup sixth round tie at Mourneview Park on Saturday.

Dungannon goalkeeper Stuart Addis produced a brilliant save to keep out Sammy Clingan’s penalty in the eighth minute, but former Swifts striker Andrew Mitchell opened the scoring just before half time. 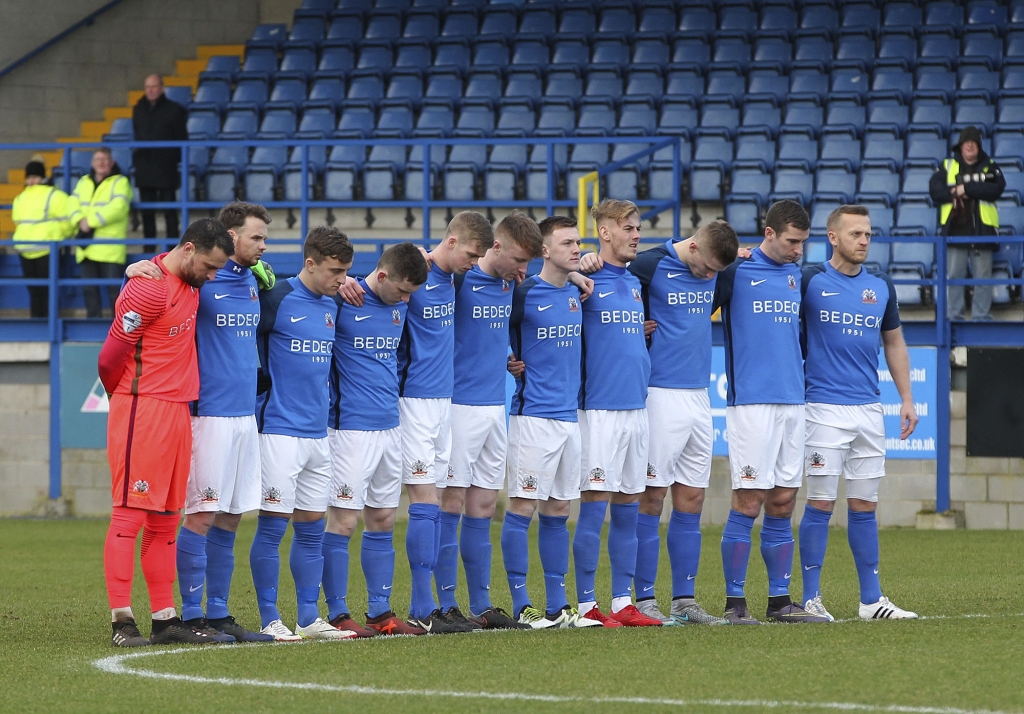 Former Glenavon winger Mark Patton was shown a straight red card 10 minutes into the second half for a rash tackle on James Singleton.

Stephen Murray got Glenavon’s second goal midway through the second period when his deflected shot found its way past Addis.

Substitute Marc Griffin then wrapped up a comfortable win for the Lurgan Blues when he pounced on a rebound late on to make it 3 – 0.

Glenavon started the game well and could have been in front as early as the second minute. Mitchell ran on to a long ball over the top from Caolan Marron. The striker lifted his effort over the onrushing Addis but it fell just the wrong side of the near post.

Two minutes later Mitchell did put the ball in the net, only for his effort to be ruled out for offside. Clingan played a pass in to Murray’s feet on the edge of the box and the striker turned and fired in a low shot. Addis made the save but he could only push the ball out to Mitchell, who tapped in from six yards, but the linesman’s flag was raised to disallow the goal.

On seven minutes Glenavon were awarded a penalty when Mark Sykes was fouled by Dougie Wilson. The midfielder made a brilliant run down the left wing, beating Swifts captain Chris Hegarty not once but twice, before carrying the ball into the box and stepping inside Wilson. The Dungannon man tripped Sykes and referee Arnold Hunter pointed to the spot.

Up stepped Clingan, who until yesterday had a perfect record from the penalty spot for Glenavon. Clingan’s penalty was both well struck and well placed, but goalkeeper Addis made an excellent save, diving at full stretch to his left and tipping the ball round the post. 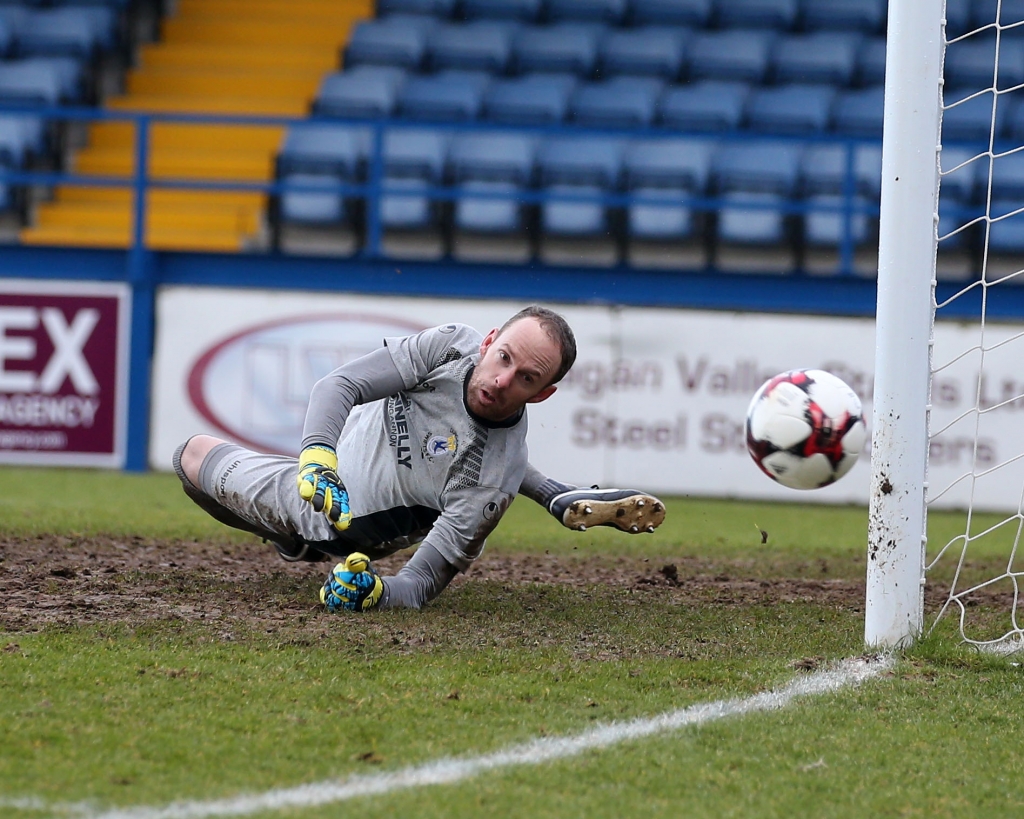 Bobby Burns almost scored directly from the resulting corner. His kick was headed off the line, the ball then came to Murray and he fired an effort narrowly over the bar.

Addis was in inspired form in the Swifts goal. In the 25th minute Joel Cooper’s cross from the left picked out Mitchell, who struck his shot first time with his right foot, but the keeper was equal to it.

Mitchell was denied by Addis once again a minute later when the striker’s shot from distance was saved. That was after Cooper had held the ball up in the box and teed up Murray, only for his effort to be blocked by Hegarty.

For a time it looked as though it was going to be one of those days for Glenavon, but when Mitchell saw a brilliant headed effort drop narrowly wide following Burns’ cross it became apparent that it was only going to be a matter of time before the hosts would break the deadlock.

Dungannon carried a limited threat of their own. In the 39th minute Marron had to produce an outstanding tackle in the penalty area to deny Swifts new boy Daniel Hughes. The young centre back timed his challenge to perfection to win the ball cleanly.

Moments later Jonathan Tuffey did well to get down and save a Wilson volley, then Addis produced yet another save, denying Murray this time, who struck a wicked volley after the ball fell to him following an Andy Hall corner.

Glenavon’s opening goal eventually arrived a minute before half time. Murray outpaced Hegarty on the right flank before chipping over a pinpoint cross to his strike partner. Mitchell took one touch to control the ball, then steered a right-foot shot beyond Addis and in off the post.

In the third minute of the second half Glenavon had another goal ruled out for offside. This time it was Sykes who had the effort disallowed after he’d been played in by Mitchell.

Minutes later Mitchell was involved again. Following some neat play between him and Cooper, Mitchell fizzed an effort across goal which narrowly evaded Murray and went just wide of the far post.

In the 55th minute Patton was given his marching orders for a bad tackle on Singleton. The winger overran the ball, then lunged in at the full-back, and referee Hunter felt he had no option but to produce a red card. 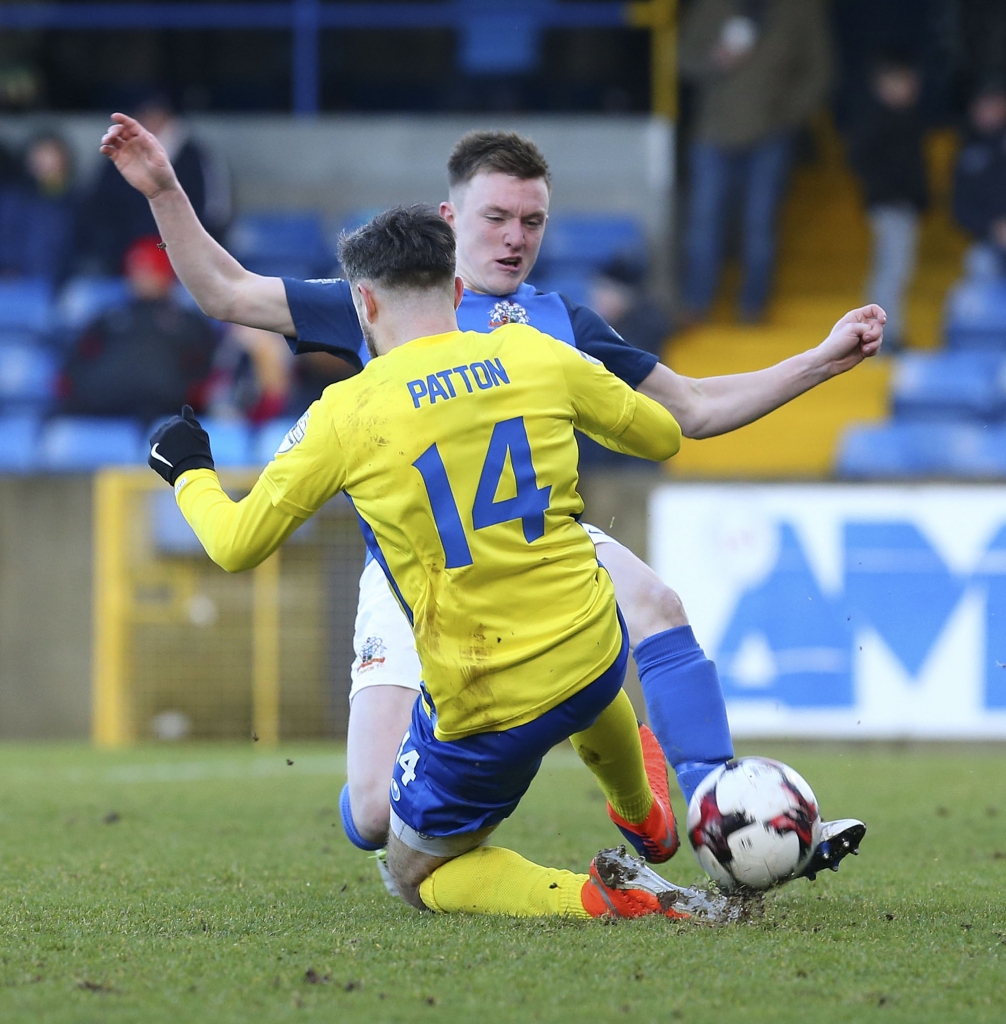 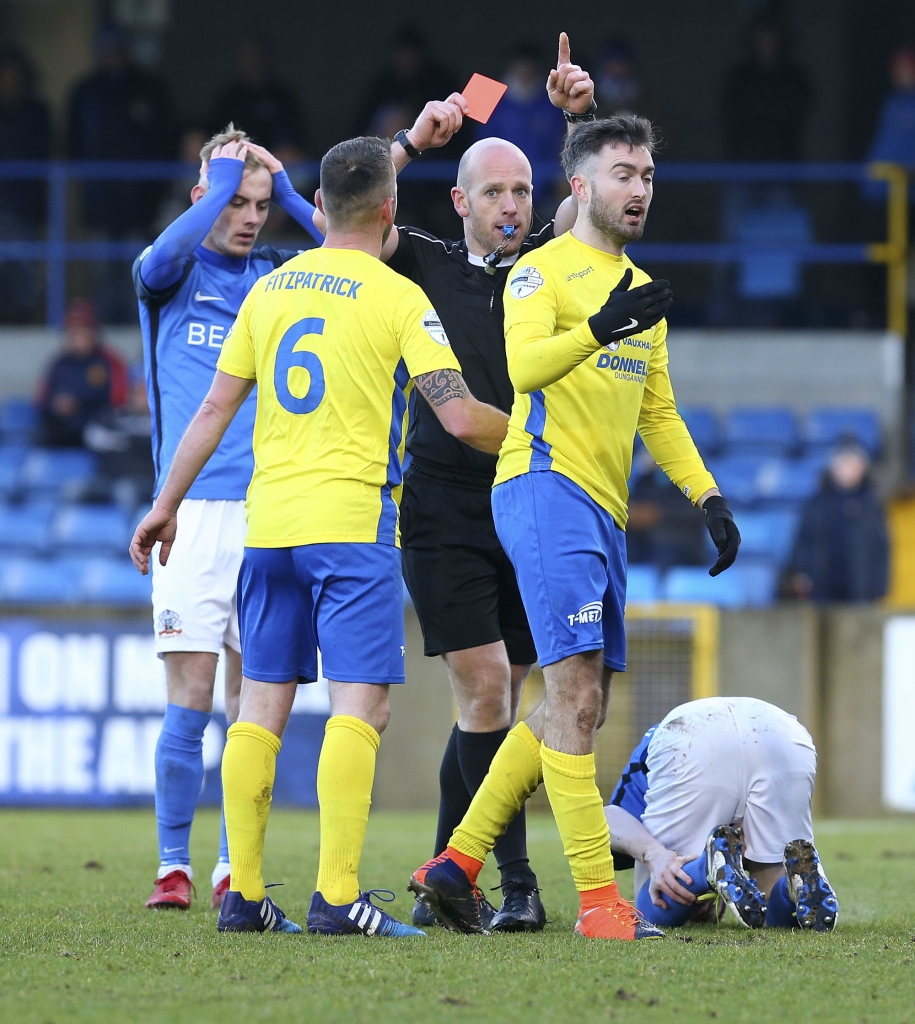 Fifteen minutes later Glenavon doubled their lead. Sykes won it in midfield and burst forward, before feeding the ball to Murray. The striker’s left-foot shot deflected off a Swifts defender and crept past Addis. 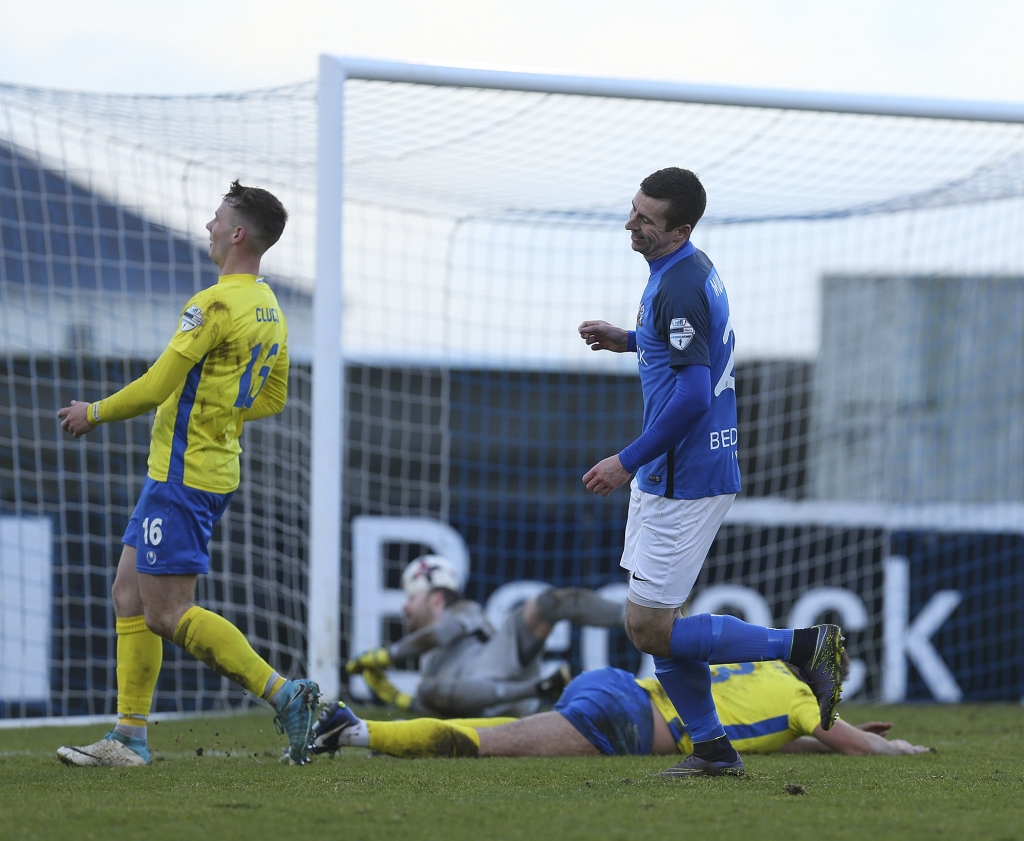 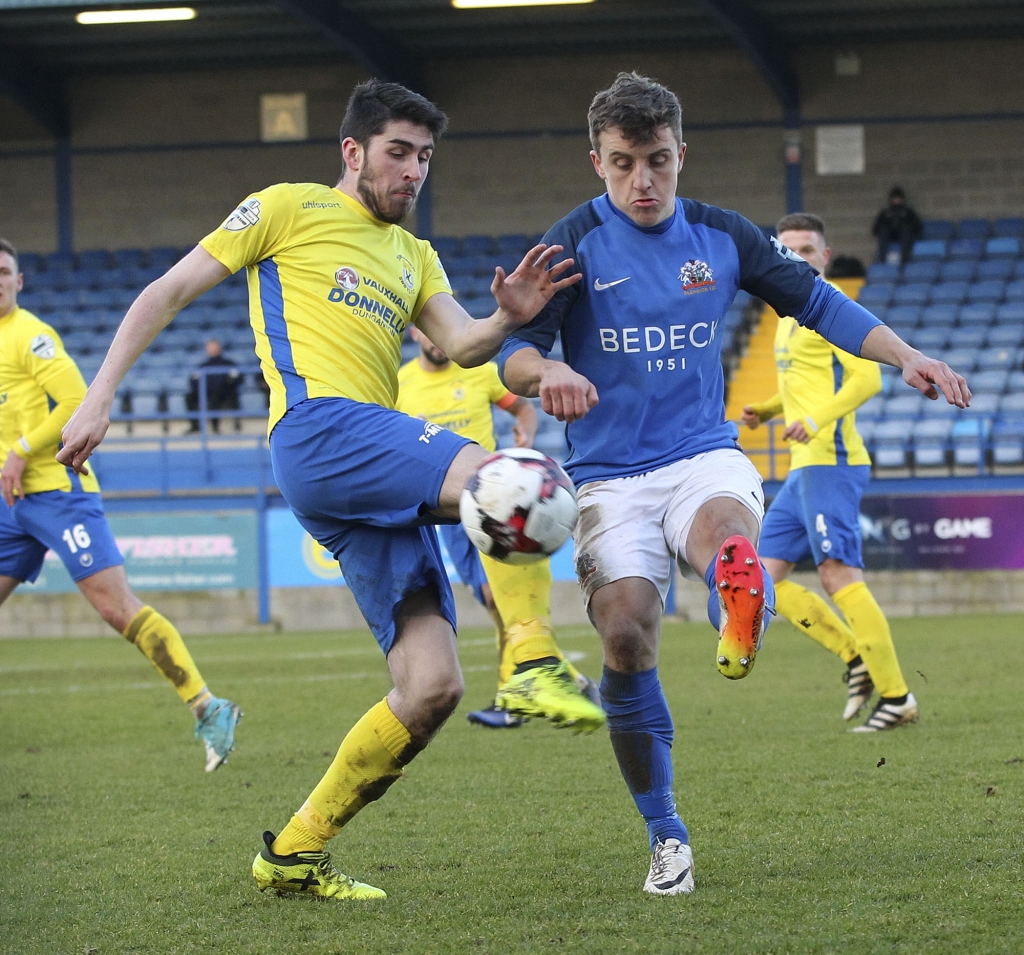 The winger was involved again when Glenavon did grab their third. Addis did well to save his shot but he couldn’t hold the ball. Substitute Griffin reacted quickest to pounce on the rebound and wrap up a resounding 3 – 0 win for Glenavon, sealing their place in the quarter-finals, where they will host Championship side Loughgall. That tie is due to be played on Saturday March 3rd. 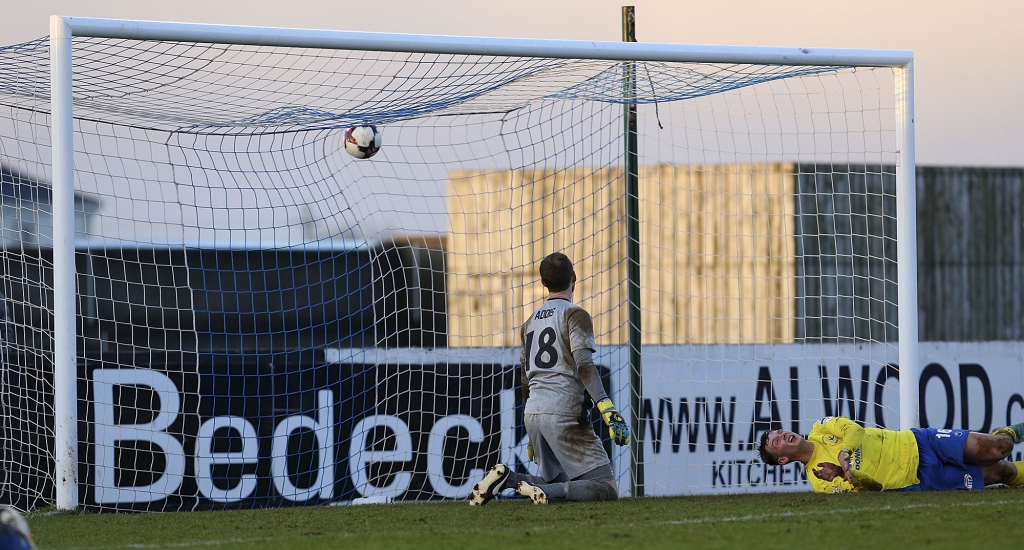 On Tuesday night (February 6th) the Lurgan Blues travel to the Newry Showgrounds to take on Newry City AFC in the final of the Mid-Ulster Cup. Kick-off is 7.45pm.

Next Saturday (February 10th) will see Glenavon return to league action as they travel up to the north coast to take on second-placed Coleraine. 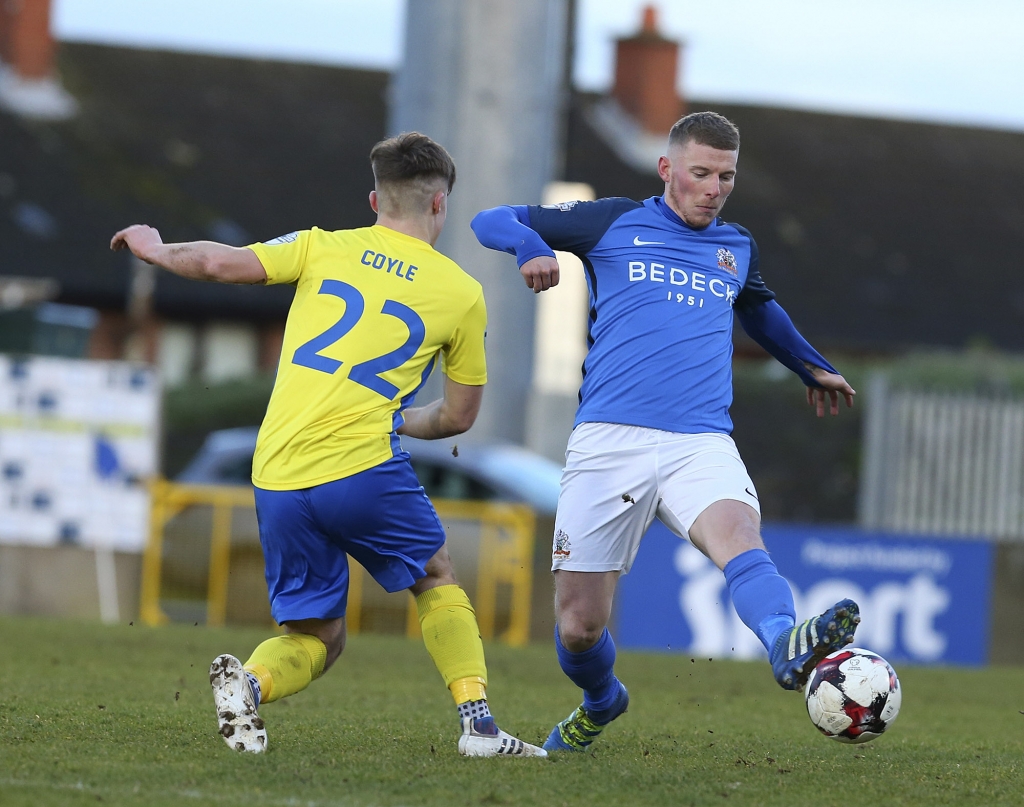 Eric Foley made his debut, coming on as a sub for the last 10 minutes. Photo by Alan Weir