Andy McGrory, who captained the Lurgan Blues on the night, opened the scoring from the penalty spot in the opening minute of the match, while Bobby Burns added a second five minutes before the break.

Winger Jack O’Mahony grabbed the home side’s third goal in the 50th minute and Adam Foley made it 4-0 three minutes later, before ex-Glenavon striker James Costello pulled a goal back for the visitors with the game’s second penalty.

Glenavon went in front as early as the first minute. Midfielder Robbie Norton was upended in the box and referee Raymond Hetherington awarded a penalty. Andy McGrory stepped up and slotted the spot-kick past Shane Harrison. 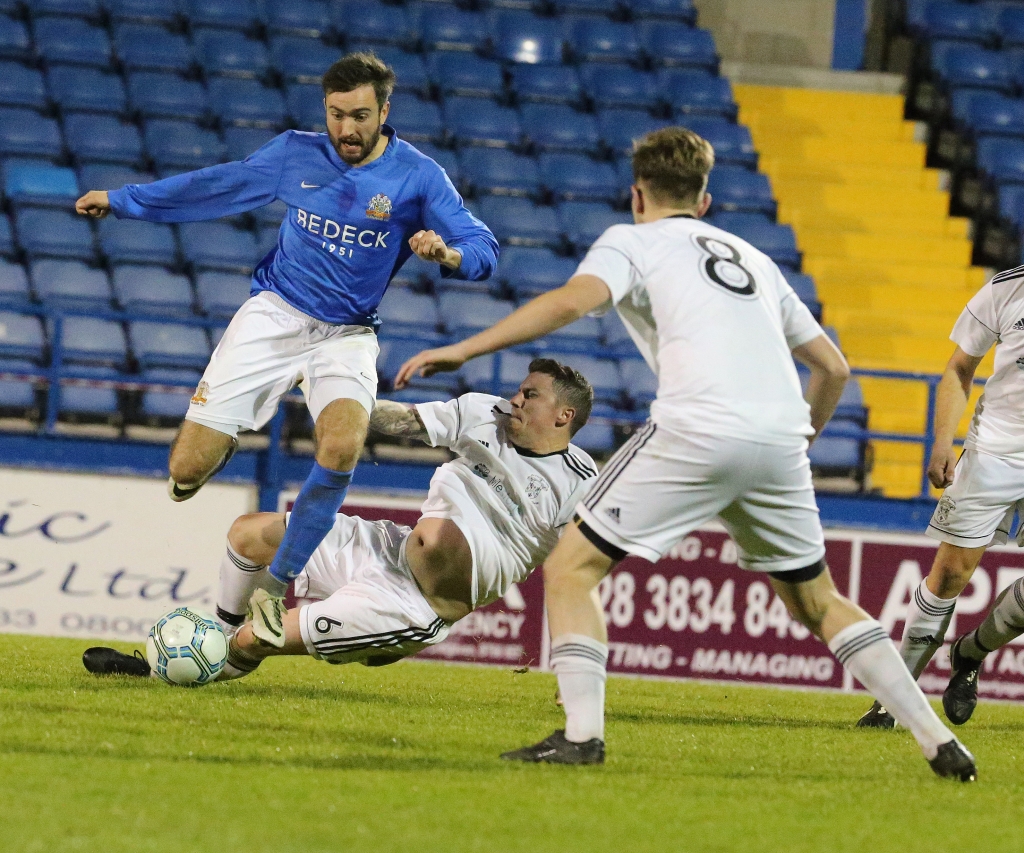 The hosts could have doubled their lead in the 20th minute when striker Stephen McCavitt had an opportunity to pull the ball back for Foley, but Rathfriland keeper Shane Harrison cut out the danger.

A minute later Costello nearly drew the visitors level when he fired a shot through the legs of Caolan Marron which went narrowly wide of Jonathan Tuffey’s right-hand post, and the striker was close to getting on the end of Steven Coulter’s cross in the 23rd minute.

On 27 minutes Glenavon had appeals for a second penalty turned down when it appeared that Jenkins had been fouled as he was just about to shoot.

The second goal arrived in the 40th minute. Foley fed the ball to McCavitt and the number 10 got his shot away. Harrison was equal to the effort but Burns followed up and converted the rebound.

Five minutes into the second half Glenavon got their third. Full-back Mark Patton went on a mazy run across the pitch and played the ball to McGrory. He in turn found O’Mahony, who made no mistake from six yards out. 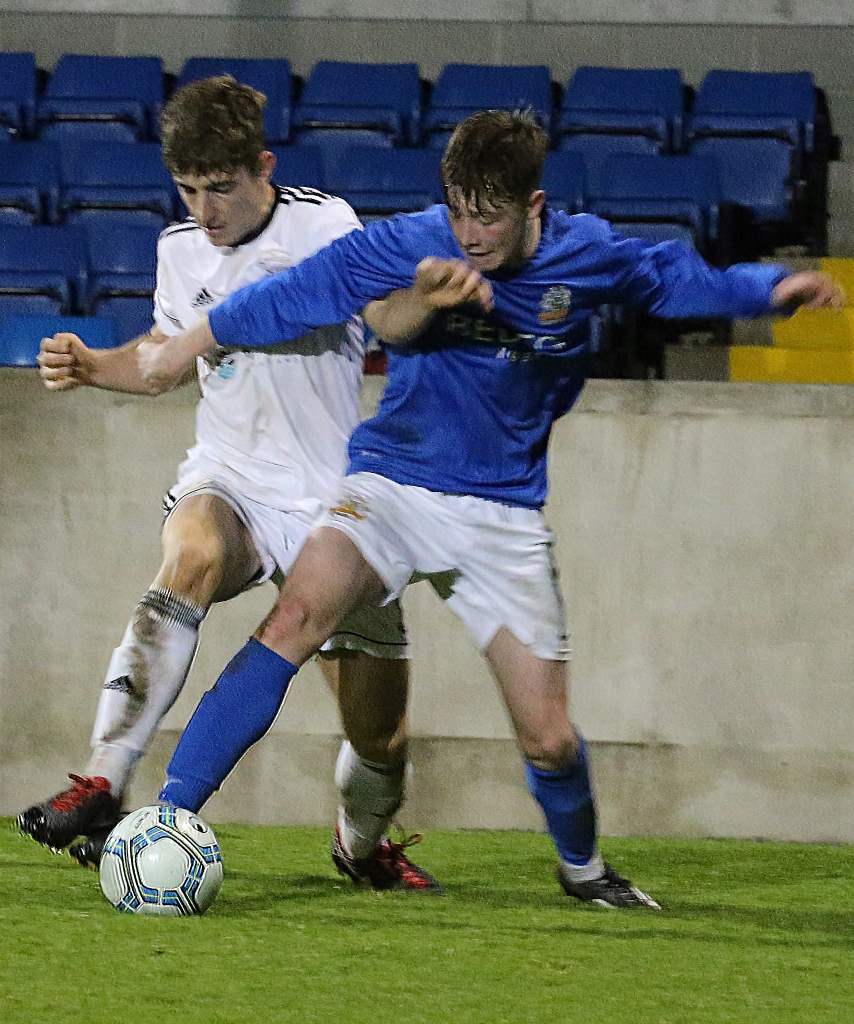 Jack O’Mahony holds off his opponent. Photo by Maynard Collins

Three minutes later it was 4-0. Jenkins slipped in Foley and he fired a low shot past Harrison.

Rangers got on the scoresheet in the 55th minute. Kris Lindsay was deemed to have fouled Michael McAlinden and referee Heatherington pointed to the spot. Costello made no mistake from twelve yards, stroking the ball into the centre of the goal.

The former Lurgan Blue was unlucky not to grab his second on 81 minutes when his left-foot shot struck the base of the post, but that was after Jenkins had already scored Glenavon’s fifth goal. O’Mahony found him with an excellent through ball in the 77th minute and the young striker tucked it away. Jenkins was subsequently announced as the night’s man of the match. 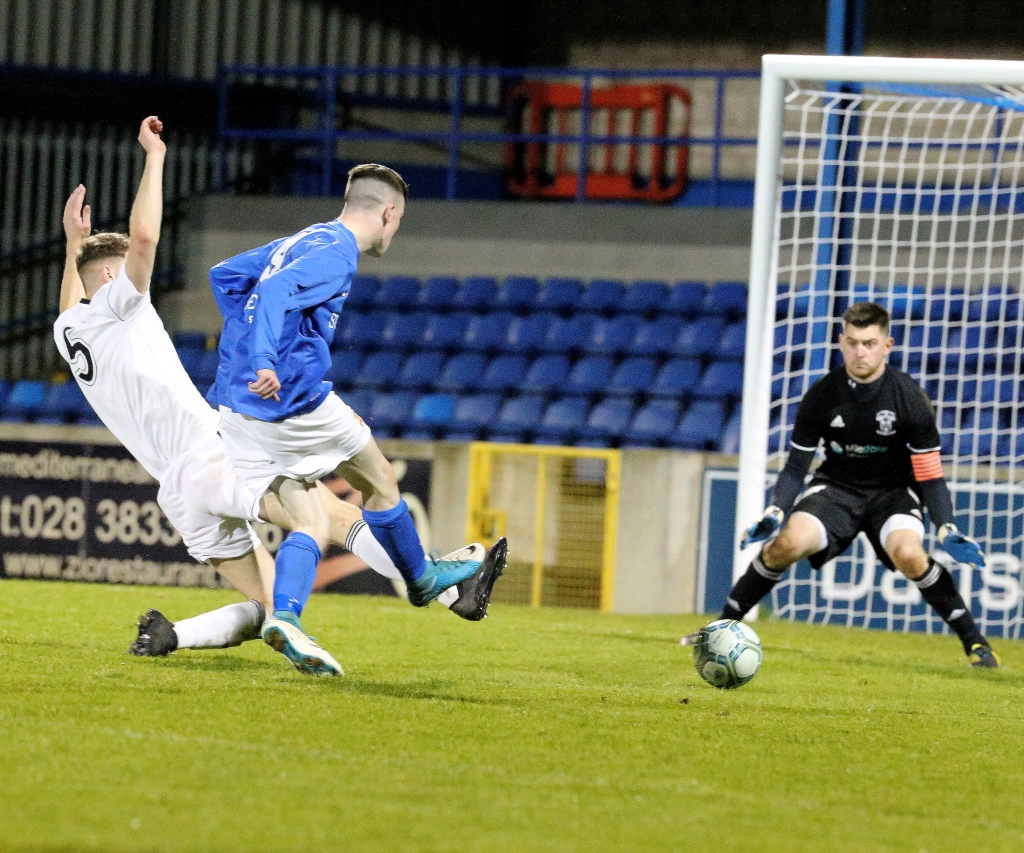 Glenavon have been drawn away to Armagh City in the second round of the Mid-Ulster Cup on 24th October with a 7:45pm kick off.